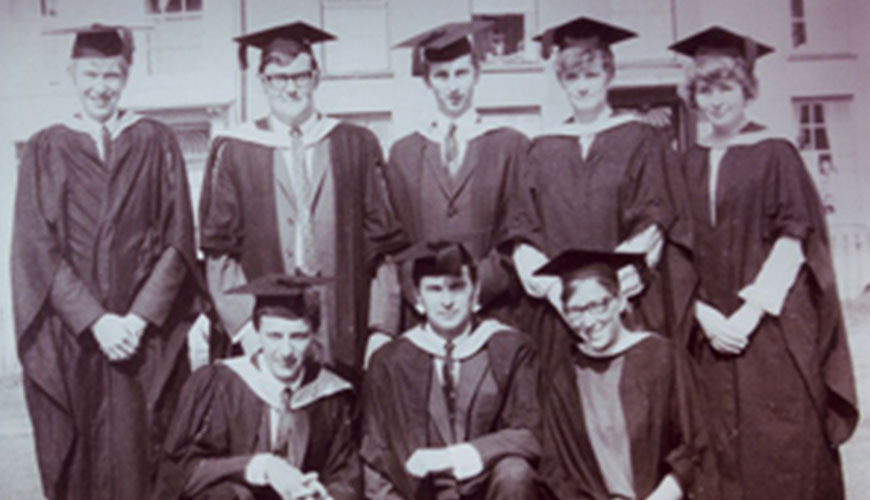 Trinity College, founded in 1848, is the oldest surviving teacher-training college in Wales. When it opened, its role was exclusively to train young men for teaching in Church primary schools.

Walter Powell is recorded as the first student – he was seventeen and had served as an assistant in a drapery and grocery shop. Other students had worked as labourers, carpenters, tailors and printers. Within a year, the first of many young miners joined from Blaenavon, Gwent.

The original name of the institution – the South Wales and Monmouthshire Training College – indicated the ambitions of the founders. A new breed of qualified teachers was to staff elementary (primary) schools with the mission to alleviate widespread ignorance among children.

The college beginnings were modest – 22 students were recruited in the first year, taught by three members of staff including the Principal, William Reed. The entry requirements included a working knowledge of arithmetic and grammar, along with the ability to take notes accurately from dictation. In the early years, astute management helped the college survive closure threats because of limited numbers and funding constraints.

The regime in the early days was tough. Each morning, students were to be up by half-past-six for a cold bath. Everyday life at the college did not change much during the nineteenth century. The early curriculum covered manual subjects, such as gardening and woodwork, introduced to remind students of their humble position in life. The visiting inspector in 1849 congratulated the college on providing a ‘prudent mix of manual labour with sedentary employment’. Students also had lessons in Latin and Greek. Initially Welsh-medium lectures were provided on a government-funded scheme but this soon ceased and did not return until the late nineteenth century. The timetable had monastic overtones and contact with the townspeople (especially the females) was tightly controlled. Fines were imposed on students for all sorts of things, ranging from ‘girling’ (unapproved contact with girls) to setting off gunpowder in the dormitory!

In terms of recreation, students enjoyed musical concerts, smoking, reading newspapers in the common room and various sports. Photography became a popular hobby in the late Victorian era. During the inter-war years, the college extended its range of sports to include badminton, tennis and hockey. A Welsh society emerged to organise Welsh-medium concerts, eisteddfodau and visits. It was at rugby, however, that the college excelled. A number of ex-students became outstanding internationals including Sid Judd, Ronnie Boon, Dewi Bebb and Barry John.

Formal college reunions date back to the 1870s and by the inter war years branches of ex-college students were established throughout Britain.  The building of the Students’ Union in 1972 provided a focus for entertainment. During the 1920s and 30s the campus expanded to accommodate increases in student numbers. Dewi hostel was erected in 1925. A student from the time recalled the living conditions in the new block:

“To keep oneself warm in the new wing during the Winter months was a problem for although it had a system of heating, the heat seldom reached even the second floor. To wash we depended on the rain-water caught in the roof of the building and this was always cold”.

The admission of female students in 1957 required further expansion and the building of Non hostel. Further projects in the 1970s and 80s included a teachers’ resource centre and education block to accommodate the needs of student teachers. The library opened in 1995 and reflected the widened portfolio of courses offered by Trinity. In the last twenty years or so, the college has diversified by introducing BA, and BSc degree programmes as well Masters Courses in a range of subjects.

The college has always tried to retain its three historic values of quality teacher-training, promoting a Christian ethos in education and bilingualism.  In 1858, on the tenth anniversary of the college, one inspector suggested that teaching was ‘a thankless career leading to premature old age and, most probably, destitution.’  Perhaps students in the twenty-first century might nod their heads at this.

If you would like to read more about the history of the college, two books are available: