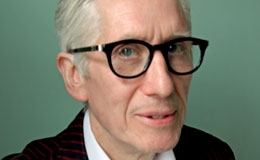 John Wood is Emeritus Professor of Design at the Goldsmiths University of London. In his student days, in the mid-1960s, he attended Manchester Art School, now called Manchester Metropolitan University. During his Fine Art studies, he built interactive electronic installations and sound toys. After graduating with first-class honours, he worked for a further two years at their Institute of Advanced Studies, creating his ‘Machine for Saying Sorry’ and a computer-assisted play with 27 characters (‘King of Shouting House’), which was performed at London’s ICA.

By this time, he had acquired a strong concern for environmental matters and had invented several solar energy devices, which drew some press attention. In 1975 he became a founder-member of the 1970s cult band Deaf School, which went on to win the national Melody Maker Rock and to secure a USA record deal with Warner Brothers. John continues to record, write and perform on stage in the guise of his alter ego ‘The Reverend Max Ripple’.

Professor Wood has taught Fine Art at a number of universities in the UK and Asia, although mostly at Goldsmiths, the University of London, where he served as Deputy Head of Fine Art, from 1978-1988, when the main YBA cohort was gathering. After this time he wrote and launched several radical design degrees which subsequently formed the basis for the current Department of Design.

In collaboration with Dr Julia Lockheart, Professor Wood co-edits the Journal of Writing in Creative Practice (Intellect). Since the mid-1970s he has written several books and many book chapters, articles, papers and given keynote talks, most of which reflect on the role of designers in confronting environmental crises, such as global warming and biodiversity losses. His (AHRC & EPSRC funded) research findings on metadesign can be accessed via the Metadesigners website.