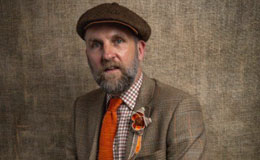 Born and living in Wales, Marc Rees is an interdisciplinary creative with an established track record of delivering ground-breaking, provocative and risk-taking projects. For the last fifteen years he has developed a number of more architecture-driven artworks; notably the location specific projects En Residencia and For Mountain, Sand & Sea, commissioned by Teatro de la Laboral and National Theatre Wales respectively.

Adain Avion was Professor Rees’ most ambitious project to date, selected as Wales' flagship project for the London 2012 Cultural Olympiad and London Festival 2012. His work Tir Sir Gâr, made in collaboration with writer Roger Williams for Theatr Genedlaethol Cymru was the most nominated production in the Theatre Critics of Wales Awards 2014, with five nominations.

In 2014 Professor Rees created a re-imagining of the world of Dylan Thomas' much celebrated Under Milk Wood, entitled Raw Material: Llareggub Revisited for National Theatre Wales and BBC Wales that incorporated the whole of the township of Laugharne as part of the DT100 Festival. He is also the founder and curator of LLAWN (Llandudno Arts Weekend) an annual festival that celebrates the North Wales seaside town’s Victorian heritage.

In 2015, he united Wales' two national companies Theatr Genedlaethol Cymru and National Theatre Wales (along with S4C) for the very first time with a site-specific, multi-platform event that commemorated the 150th anniversary of the founding of Y Wladfa, the Welsh colony in Patagonia, Argentina. In May 2016, Professor Rees presented a brand new site-specific work entitled Digging for Shakespeare commissioned as part of the 50th anniversary of Brighton Festival curated by Laurie Anderson.

Last May he worked with SITUATIONS as one of the lead artists on their large-scale project The Tale which took over the whole of Torbay. His last project P.A.R.A.D.E. was a collaboration with National Dance Company Wales and BBC NOW performed at the WMC and PONTIO, Bangor as part of the R17 season for which he is jointly nominated with Caroline Finn as best director and best choreographer at The Wales Theatre Awards 2018.

He is currently working on his 14-18 NOW commission NAWR YR ARWR / NOW THE HERO,  an ambitious, large-scale site-specific event to commemorate WW1 that will take place in and around The Brangwyn Hall in Swansea this September in conjunction with NOW FOR MORE a city-wide mini Arts festival.