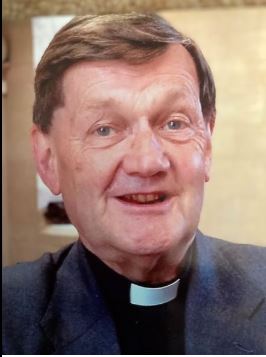 David Trevor William Price is the author of A History of Saint David’s University College Lampeter, the official history of the institution.

Price was the son of a clergyman. Although he was born in Colwyn Bay and is proud to be Welsh, he grew up in Shropshire. He attended Wem Grammar School before being awarded an Open Scholarship to read Modern History at Keble College Oxford. After he graduated, his first post was as Assistant Editor of the Victoria County History of Shropshire.

Price came to St David’s College Lampeter in 1970 to teach history; he was promoted to Senior Lecturer in History and Theology in 1987.  He was attracted by the college’s Anglican tradition, as well as by the opportunity to revive his Welsh. He says he initially used to spend an hour in the Castle Hotel several times a week with Idris Reynolds of the Library, speaking only Welsh.

Alongside lecturing, Price became the institution’s first honorary archivist. He gathered and assembled archival materials relating to SDC’s history, along with the papers of former members of staff and students. These were kept in numbered, indexed boxes. In tandem with organizing the records, Price worked on A History of Saint David’s University College Lampeter. The first volume, covering the period up to 1898, marked the college’s 150th anniversary. It was published by the University of Wales Press in 1977. The reviewer in Ceredigion commented ‘The Reverend D.T.W. Price has an interesting tale to relate. In this task, he has succeeded admirably …’ The second volume, stretching from 1898 to 1971, came out in 1990. Gibson described it as a ‘fascinating, sympathetic but balanced account of the development of a university college.’

Price also wrote a bilingual study, Yr Esgob Burgess a Choleg Llanbedr = Bishop Burgess and Lampeter College, (University of Wales Press, 1987). The first part examines the life and times of Thomas Burgess, the second the story of the college he founded. The volume was part of the St David’s Day bilingual series. Jones commented, ‘It is a tale well told, written lucidly in English and Welsh.’

Away from the story of Lampeter, Price published A History of the Church in Wales in the Twentieth Century, in both English and Welsh versions, (Church in Wales Publications, 1990). Herbert wrote ‘what we have from his meticulous pen and twinkling eye is a view of an ecclesiastical institution, struggling to establish an identity, wrestling with huge social forces; and language.’ Price’s most recent book has been a biography of a long serving Bishop of Bangor, Archbishop Gwilym Owen Williams: ‘G.O.’: his Life and Opinions, (Church in Wales Publications, 2017). Writing in the Church Times, Wilbourne described Price’s work as meticulously detailed. Price also contributed many articles to periodicals; these included an account of the contribution of Lampeter graduates to the Church in Wales. He was a member of the Board of Celtic Studies of the University of Wales for twenty years. He was elected a Fellow of the Royal Historical Society in 1979 and a Fellow of the Society of Antiquaries in 1995. He was awarded an honorary doctorate by UWTSD in 2018.

Alongside his academic work, Price was ordained deacon in 1972 and priest in 1973, the latter service being held, very unusually, in the college chapel. In the years that followed, he held a variety of posts in the Diocese of St David’s and the wider Church in Wales, as well as in the college itself. At Lampeter, he was Chaplain from 1979 to 1980 and Dean of Chapel from 1990 to 1991. He edited the annual St David’s Diocesan Directory from 1981 to 1998. He was diocesan archivist from 1982 to 1998 and was made a Residentiary Canon of St David’s Cathedral in 1992. In 2018, he was also appointed an Honorary Canon of St Paul’s Cathedral, St Helena.

Price became priest-in-charge at Betws Bledrws in 1986, ministering as a non-stipendiary clergyman alongside his academic work. Eventually, the time came when he felt that he had to choose between academia and the church. In 1997, he moved into full-time pastoral ministry. He became Vicar of Kidwelly and Llandyfaelog in Carmarthenshire. He was also an Examining Chaplain to the Bishop of St David’s, advising the Bishop on theological matters. Following this, Price became priest-in-charge of Myddle and three neighbouring parishes in Shropshire. On his retirement in 2008, Price went back to Wem; he became Rural Dean of Wem and Whitchurch.

He has continued his interest in local history. He was editor of the Transactions of the Shropshire Archaeological and Historical Society between 2003 and 2015. He has been a trustee of the Shropshire Historic Churches Trust since 2005 and is now its Chairman. He also contributed to The Victoria History of Shropshire: Wem, edited by Judith Everard, James P Bowen and Wendy Horton (2019). He comments, however, that he hasn't been able to get away from Wales. He was Provincial Adviser on Archives to the Church in Wales and he contributed chapters to Religion and Society in the Diocese of St Davids 1485-201, edited by William Gibson and John Morgan-Guy, (Ashgate, 2015) and A New History of the Church in Wales, edited by Norman Doe, (Cambridge University Press, 2020).

Price married his wife, Alison, in 1973. Their three children, Clare, Michael and Abigail all went to school in Lampeter. Abigail went on to study theology at University of Wales Lampeter. Price lists as his hobbies, railways, languages, and looking at churches.  He has visited every Anglican church in Wales.