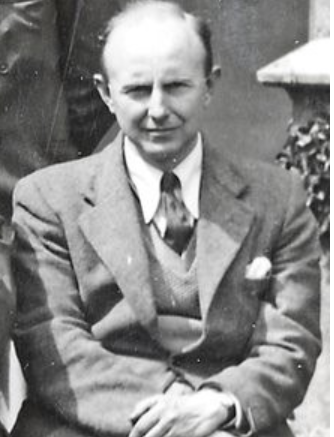 Born in 1913, the youngest of three brothers, Frank Richard Newte attended Colet Court, London where he was taught for three years by George Ewart Bean, a renowned English archaeologist. Newte won a scholarship to Hertford College, Oxford where he had a distinguished academic career. He matriculated in 1932 and achieved a first in Classics moderations in 1934. The following year he won the prestigious Chancellor’s Prize for Latin Verse, which was recited in the Sheldonian Theatre, Oxford and lat

In 1938 Newte joined St David’s College to assist Professor Harold Harris in teaching Classics. One year later he left Lampeter, purportedly to work with the Royal Artillery as a Regimental Sergeant Major. He returned to the College in 1946 where he continued to teach for the next thirty-one years.

The publication in 2011 of Asa Briggs’s Secret Days: Code-breaking in Bletchley Park, revealed that Newte had in fact been in the Army Intelligence Corps. Part of a hand-picked team he was attached to SIXTA, an acronym for Number 6 Intelligence School Traffic Analysis. In May 1942 SIXTA were transferred to Bletchley Park, Buckinghamshire, where they played a crucial role in the breaking of the Enigma Code. Like many of the staff working at Bletchley, Newte remained silent about his war time role.

Upon his return to St David’s he continued as Classics lecturer which he combined with the role of College Librarian. Alongside his lecturing responsibilities, Newte wrote a number of books and translations. To the publication in 1935 of his prize winning verse on Boudica, he added amongst others translations of Plato, Isocrates and the Comedies of Terence.

Although described as a ‘shy, hesitant, unobtrusive and eccentric’ man, Newte was well liked by the students at St David’s College. Reminiscences recall his piano playing which could be heard across the Quad, his sufferings with indigestion and his willingness to loan his car when it was needed. A select number of students shopped for him and he regularly took groups of students abroad during the summer holidays, on the proviso that they drove.

When Newte died, aged sixty-four, the Principle Lloyd Thomas recorded in his Annual Report 1976-77, that the College Chapel was crammed with his former students and staff. Whilst Professor Norman Gully, a member of the Classics department, wrote of Newte’s ‘devoted service, both as a teacher and a Latin scholar’ who would ‘be remembered with affection and respect by a long line of students and members of staff’. 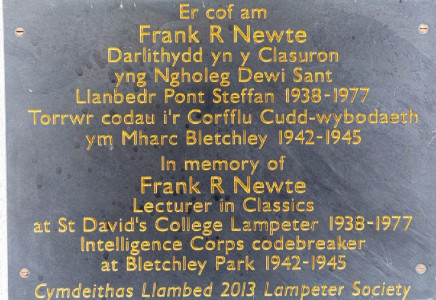 In 2013, the Lampeter Society provided funding for the provision of a slate plaque, commemorating Newte’s work both as a lecturer and as a code-breaker, which can be found in the archway to the Quad placed below Newte’s rooms in the Tower.