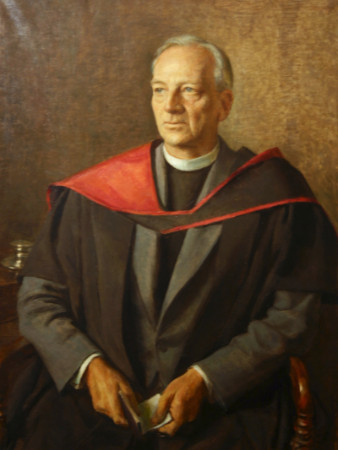 He came from Treharris, about ten miles south of Merthyr Tydfil; his parents were John and Ann Thomas. He was educated at King’s College, Taunton, before spending three years working for John Cory and Sons Ltd in the docks at Cardiff.  In 1927 he entered St David’s College, Lampeter; he became Senior Scholar and President of the Students’ Meeting. As senior scholar, he was the leader of a deputation protesting against compulsory attendance at chapel. Lloyd Thomas graduated with a first in history, before going on to Jesus College, Oxford, to read theology.  He was ordained deacon in 1932 and priest in 1933. His first clerical post was at St John the Baptist, Cardiff, where he was curate from 1932 to 1940.

During the Second World War, he worked as an army chaplain in North Africa, Italy and Palestine; he eventually became chaplain-in-chief of Middle East Forces. In 1944, he was appointed Rector of the significant parish of Canton St John in Cardiff. He moved to the parish of Newport St Mark in 1949. In the same year he married Elizabeth Swaffield; the couple had three daughters. In 1952 Lloyd Thomas became dean and vicar of St Woolos’s Cathedral, Newport.

He was a long-standing member of the Lampeter Society and had served on the Council of St David’s College since 1950. Early in 1953 he was asked to apply for the post of principal. (He later commented that if he had thought he had any real chance of being appointed, he would not have put in for it!) It is known that ten people applied for the role. However, Lloyd Thomas was indeed appointed, accepting a reduction in salary from his appointment as dean. He had produced no scholarly works, lacked teaching experience and did not speak Welsh. Yet he possessed a strong personality and huge stamina.  Price comments that he was the right man for the college at a critical time.

At the time, Lampeter had only 128 students in residence; 25 of these were members of the Theological Hall. To a large extent, the declining number of students was a direct result of the reduction in the number of prospective ordinands in England and Wales. However, Lloyd Thomas assumed the college would survive, saying ‘it is impossible to do a job properly unless you are optimistic.’ He asked former students to encourage men to come to St David’s College, pointing out that the college also welcomed those who did not intend to become clergymen. They would still receive ‘a first-class university training with a Christian background.’

Lampeter was engaged in a long struggle to secure recognition and adequate funding from the University Grants Committee and the University of Wales.   Lloyd Thomas quickly concluded that if Lampeter was to have a future, it had only about five years in which to secure Treasury aid. Although the college was being run on a shoestring, it was forced to appeal to the Church in Wales for financial help. Between 1953 and 1959, Lloyd Thomas himself typed myriads of letters to explain the precarious state of the college to people of influence. He also seized every opportunity to crusade for the college, and he refused ever to admit defeat. A New Endowment Appeal, launched in May 1955, aimed to raise at least £100 000 to allow the college to remain open. However, the real hope was that a successful fund-raising campaign would persuade the University Grants Committee to help Lampeter. Negotiations with the UGC dragged on. St David’s College, with a projected size of 250 students, was considered too small, but any proposal for expansion was rejected because of its remote location.

Eventually, in 1960, University College, Cardiff, offered to sponsor St David’s College. The UGC considered that this would enable it to recommend financial aid for Lampeter. St David’s College would receive a grant from the Treasury via Cardiff. It was financially secure, probably for at least the next ten years. The following years saw considerable expansion. The first women were admitted as undergraduates in 1965 and the college’s traditional range of subjects was enlarged.  In 1967 the college’s incorporation into the federal University of Wales was approved.

Possibly because he did little teaching, Lloyd Thomas accumulated administrative responsibilities. In October 1956, he became Registrar; this involved responsibility for admissions and many interviews with applicants. He was a Canon of St David’s Cathedral from 1956 to 1975 and Chancellor from 1963 to 1975. Price comments that through all his years as principal, he was above all a priest; he was careful to attend college chapel every morning and evening during term.

Lloyd Thomas retired in 1975; he died on 11 April 1984. Brian Morris, one of his successors as principal, said at his memorial service in the college chapel, ‘If it hadn’t been for Roland Lloyd Thomas none of us would be here today … The survival, the style, and the present prosperity of this University College is down to him.’