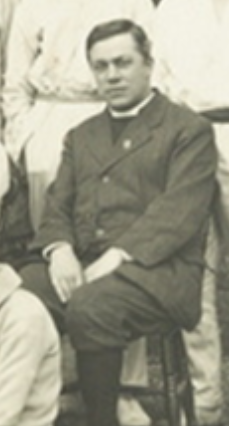 Edmund Tyrrell-Green (1864-1937) was Professor of Hebrew and Theology at St David’s College, as well as precentor and lecturer in architecture.

He was born in Westminster; his father Charles Alexander Green was an estate agent. Edmund studied at Christ Church Cathedral School, Oxford, and then at St John’s College, where he took a first in theology as well as the Denyer and Johnson Scholarship. Ordained deacon in 1887 and priest in 1888, he spent three years working as a curate at a well-known Anglo-Catholic church, St Barnabas, Oxford. He was appointed lecturer in Theology and Hebrew at St David’s College, Lampeter, in 1890, following the resignation of T.F. Tout. He became a professor in 1896. An active high churchman, he was noted for always lecturing in cassock and gown as a matter of principle. One of the students, Daniel Parry-Jones described Tyrrell Green as “the most human member of the staff and the one most keenly interested in the religious problems of Wales.” Another former student, Canon L.G. Appleton, remembered him going for long walks over the hills with students. Tyrrell-Green was also precentor and therefore responsible for the choral music of the college chapel. He was an effective and highly sensitive teacher of musicians and singers. One of his student organists, Handel Llewellyn commented on his belief that ‘our music in worship must be the best, and must be carefully prepared.’ 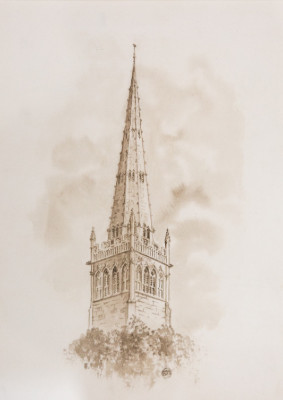 Tyrrell-Green was a prolific author, often writing on doctrinal matters. His book The Thirty-nine Articles and the age of the Reformation was published by Wells Gardner, Darton & Co in 1912. On a devotional level, The sinner’s restoration (Wells Gardner, Darton & Co., 1898) records a series of six Lent addresses, given at a selection of places in the diocese of St. David’s. Another book How to preach: a manual for students, (Wells Gardner, Darton & Co, 1905) recorded his lectures to Lampeter students. For him, Christian truth was personal and therefore preaching was the divinely chosen means for propagating Christianity.

A keen local historian, he became one of the founders and first chairman of the Cardiganshire Antiquarian Society in 1909. With Rev. E.J. Davies, he was also first editor of Transactions of the Cardiganshire Antiquarian Society and Archælogical Record. A keen cyclist, he visited many ancient buildings, hoping to share his discoveries. He was a frequent contributor to local history journals, mostly writing about church architecture. In particular, he became a leading expert on baptismal fonts. His long article, “Types of baptismal fonts” was published in Transactions of the Honourable Society of Cymmrodorion, 1918-19. He followed this was a book, Baptismal fonts: classified and illustrated, (SPCK, 1928).  He used his own drawings in both pieces of work. He also included 129 of his own pen-and-ink drawings in Towers and spires: their design and arrangement, (Wells Gardner, Darton & Co., 1908). He commented in the preface, ‘The preparation of this book, with its illustrations, has been a labour of love during the vacations of the past eight or ten years. Almost all the towers illustrated have been specially visited, studied, and drawn; only a few of the sketches have been made altogether from pictures.’

Tyrrell-Green was an active member of the Liberal Party. Possibly surprisingly, he was in favour of the disestablishment of the Welsh church. In 1910, he commented to a meeting of the League of Young Liberals that ‘the present state of things robbed both clergy and laity of their rightful voice in the management of Church affairs.’ He was a member of the Bishops’ Advisory Council from 1913 to 1924. On a lighter note, he wrote and produced several plays with incidental music: The Ghost of Garston Grange (1920); The Heir of Ardley (1920) and The Cross and the Crescent (1921).

Tyrrell-Green married a Welsh-speaking woman, Margaret Roberts, at Llanrwst in 1891. They went on to have three children; sadly, their elder son, Denis Noel, was killed in action in 1917. Margaret also published some poetry in her own right, including a book dedicated to Denis.

Tyrrell-Green left St David’s College suddenly in 1924, after thirty-three years work there. S. David’s College Magazine described him as ‘a friend to all students and always ready to assist in any Coll. Functions.’ The writer commented, ‘We wish Professor Green health and success in his work wherever he may be.’

Tyrrell-Green died at Chichester on 18 February 1937.