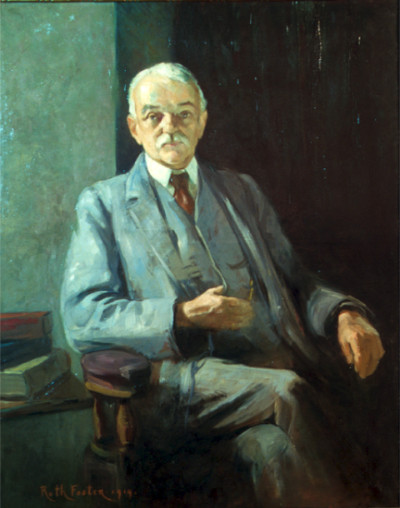 Walker was a native of Kilbirnie, a small Ayrshire town around twenty miles south west of Glasgow. His parents were James and Janet, née Steele. He was educated at Glasgow High School and then at Glasgow University, where he won the medal for Logic and Moral Philosophy. He went on to Balliol College Oxford, where he was Snell Exhibitioner. He graduated from Oxford with a first-class degree in Literary Humanities. He eventually received an Honorary LLD from Glasgow in 1901 and an Honorary DLitt from the University of Wales in 1918.

Walker came to Lampeter in 1884, initially as lecturer in English and philosophy. The next year he married Mary Jane Roxburgh, who he had met in Betws-y-Coed. He and Janie were to have three daughters, Agnes Nea, Janet Elsi Alice and Frances Damaris Arnold. Like her husband, Janie was an accomplished author. Walker was a layman and by background a Presbyterian. At Lampeter, he fought fiercely against the wearing of Eucharistic vestments in the college chapel. On the one occasion he preached, he found it a terrifying experience!

Walker was promoted to professor in 1890. He was said to have been ‘the most inspiring teacher in Britain.’ He was also a prolific and readable author. His first book was Three centuries of Scottish literature, (Maclehouse, 1893).  The two volumes traced its history from the Reformation and Sir David Lyndsay until Sir Walter Scott, whom Walker regarded as the last figure who was nationally and distinctively Scottish. Somewhat grudgingly, the reviewer in The Athenæum commented, ‘Mr Walker has done well within the limits he has chosen, and his book is a welcome contribution to the illustration of an interesting subject.’

The Greater Victorian Poets (Swan Sonnenschein, 1895) was a popular rather than an academic book. Walker examined Tennyson, Arnold and Browning, giving a detailed and chronological account of each of them, together with a running commentary.

Walker’s huge work, The Literature of the Victorian Era (Cambridge University Press, 1910) provided a detailed introduction to Victorian writing and the context in which it was created. He divided the book into two sections, the first dealing with ‘speculative thought’ and the second with ‘creative art.’ The second of these sections was subdivided into poetry and prose fiction. The final part of the volume swept up history and biography, literary and aesthetic criticism, plus miscellaneous prose. Walker deliberately omitted living authors; Thomas Hardy is excluded for instance. Darbishire commented ‘The book is essentially alive. It deals adequately with a great subject, and it will make a sure appeal alike to the scholar and the general reader.’ Such was its importance that it is still in print, (Cambridge University Press, 2011).

Three years later, Walker and his wife Janie published Outlines of Victorian literature (Cambridge University Press, 1913). They aimed to produce a clearly worded and accessible introduction and to stimulate interest in the lives and works of the various writers. This much smaller book was based upon The Literature of the Victorian Era. Again, it remains in print, (Cambridge University Press, 2011).

Walker contributed two volumes to the ‘Channels of English literature’ series, both pioneering in their subject matter. In The English Essay and Essayists (Dent, 1915), he attempted to present the first complete survey of this significant literary form. His aim was to examine the writings of all British essayists not still living. English Satire and Satirists (Dent, 1925) covered five centuries of literary history, from Piers the Plowman to Samuel Butler and The Way of all Flesh. Walker also contributed to The Cambridge Modern History and The Cambridge History of English Literature.

Alongside teaching and writing, Walker was active in local politics. He was Mayor of Lampeter in 1900, 1901 and 1902, and is said to have been a leading light behind the building of the Victoria Hall in the town.

In 1930, Walker refused an offer to retire. He died on 28 June 1939, aged eighty-four but still a member of St David’s College staff. His daughters presented an oil painting of him by Ruth Foster to the college. His lecture notes are held in UWTSD’s Special Collections and a hall of residence at Lampeter is named after him.