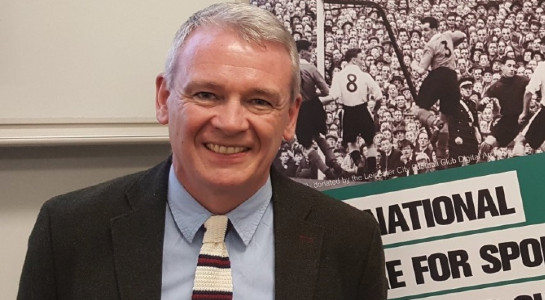 Since 2014 Martin Polley has been Professor of History at De Montfort University and Director of its International Centre for Sports History and Culture.

Born in west London in 1965, Polley attended Burlington Danes school before enrolling at St David’s University College to study history. Graduating with a first in 1987, he completed his PhD in 1991, writing his thesis on The Foreign Office and International Sport, 1918-1948.  Fully immersing himself in university life, Polley represented St David’s at football and cross country, appeared in two of the Dramatic Society’s productions, Macbeth and Tartuffe and was elected as the Student Union’s Vice-President of welfare (1985-6). His long career as an educator had its beginnings in the university’s history department, where he taught part-time whilst researching his PhD. Whilst at St David’s he met his wife Catherine, with whom he has recently celebrated their 31st anniversary.

After two years at the Foreign and Commonwealth Office, employed as a historical research assistant, Polley joined King Alfred’s College, Winchester (now the University of Winchester). Working initially as Lecturer and then Senior Lecturer for both the history and sports studies departments, he taught courses in modern history, historiography and sports history. In 2001 Polley moved to the University of Southampton, where for the next twelve years he was Senior Lecturer in Sport. He re-joined the teaching staff at the University of Winchester in 2013, again lecturing in Sports Studies and History, before his move to De Montfort University.

During his academic career Polley has produced an extensive and diverse range of publications and articles, contributed several entries to the Oxford Dictionary of National Biography and presented papers at numerous conferences both in this country and abroad. He interests include the history of sport and leisure, gender and sport, the history of the modern Olympic Games and its predecessors, sport, politics and diplomacy and sports heritage. His first book Moving the Goalposts: a history of sport and society since 1945 (Routledge, 1998) was acclaimed, receiving the recognition that, ‘Those who teach undergraduate modules upon the social and cultural history of sport will welcome this work…it will also become an essential text for the study of post-war popular culture in Britain.’

A reference book, An A-Z of Modern Europe since 1789 (Routledge) was published in 2000, followed three years later by the five volume The History of Sport in Britain 1888-1914 (Routledge) which Polley edited. In 2007 he wrote a textbook on sports history based on his experiences of teaching the subject, Sports History: a practical guide (Palgrave). This was also well received, considered to be ‘A first-class introduction to sports history…’ and ‘An erudite and thoughtful book that will be invaluable to sports students studying history’.

The year before the London Olympic Games, Polley published The British Olympics: Britain’s Olympic Heritage 1612-2012 (English Heritage, 2011). The Independent considered it to be ‘An impeccably researched record of Britain’s relationship with the Olympic movement…’ whilst The Times Literary Supplement recognised it as a piece of ‘erudite…thorough research.’ The 2012 London Olympics aroused an enormous amount of public interest and enthusiasm, expressed through various cultural forms. One such example, which Polley was involved with in a consultancy capacity, was the National Youth Theatre’s Olympic heritage project, White City/Black Country. This two-year enterprise which concluded with a new play which premiered in August 2011, celebrated the significant role played by the Black Country in the 1908 and 1948 Olympic Games. Polley, as the project’s historical consultant, helped the young cast to explore the social and historical background to the two Games. The play’s director praised his workshops which were ‘both informative and engaging, and provided our cast with an excellent contextual knowledge of the time periods and events that our production was concerned with…in a way that was relevant to the project, and…accessible to all.’ Polley has also shared his knowledge and enthusiasm for the Olympic Games with a younger age group, working with St Bede’s Church of England Primary School on their creative writing project, Voices.

Alongside his academic commitments and consultancy work, Polley has been involved with numerous films, television and radio projects. These include such documentaries as The Game of Their Lives (Verymuchso/BBC 4), The First True Olympians (BBC 4) The 1960s (UKTV History) and Word of Mouth (BBC Radio 4).