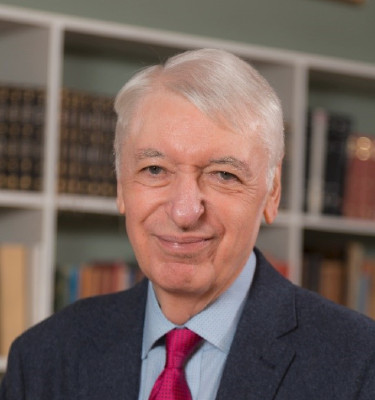 Robert Jackson is an expert on religious and intercultural education and Founding Director of the Warwick Religions and Education Research Unit (WRERU).

Robert Mason David (‘Bob’) Jackson was born on 11 June 1945 in Ilkeston, Derbyshire. He attended Hallcroft School, before reading theology at St David’s College, Lampeter. Following this, he took a Postgraduate Certificate in Education at Fitzwilliam College, Cambridge. At Cambridge, he was a member of Footlights, the famous university theatrical club.

Jackson’s first teaching post was at Nottingham High School, where he worked from 1967 to 1971. He then moved to Coventry College of Education, beginning his long involvement in the study of education as a specific discipline. At this time, he completed an MA degree in philosophy. In 1978, Coventry College of Education was incorporated into the University of Warwick as the Westwood campus. Jackson became part of the Department of Arts Education (later the Institute of Education and then the Centre for Education Studies). His PhD, awarded in 1994, concerned the interrelationship between religious education and religious studies. Also, in 1994, Jackson became the first director of WRERU, the Warwick Religions and Education Research Unit. He was promoted to Professor of Religions and Education in 1995. He remained at WRERU until his retirement in 2012; he is still involved in the work of the unit. He was awarded a DLit by University of Wales, Lampeter in 2006 for a selection of his published work. He holds honorary doctorates awarded by the Norwegian University of Theology (MF), Oslo, and by the Norwegian University of Science and Technology (NTNU), Trondheim.

Jackson argues that if education is about understanding the full breadth of human experience, this must include religion. He sees religious education as significant for students’ personal and social development. His earliest research was ethnographic work on Hindu families in Britain, undertaken with Eleanor Nesbitt. Following this, he wrote a series of books on Hinduism, including Approaches to Hinduism (1988, with Dermot Killingley); Religions through Festivals: Hinduism (1989), and Listening to Hindus (1990, with Nesbitt).

Jackson published Religious Education: An Interpretive Approach (Hodder and Stoughton) in 1997. He argued that, rather than following Ninian Smart’s ‘phenomenological’ approach to religious education, a fruitful methodology might be found in anthropology. Jackson’s interpretive approach examines the dynamic relationships between individual people, the groups they relate to, and wider religious traditions. There is also a reflective element, where the student considers the implications of the new learning for their own development. In Rethinking Religious Education and Plurality (RoutledgeFalmer, 2004), Jackson suggested that the educational potential of the study of religion in state-funded schools had been underestimated. Community schools should be seen as providing a pluralist context for educational development, rather than places of secular learning. The diversity of religions and lifestyles in state schools offers a huge scope for dialogue.

Jackson has been heavily involved in the Council of Europe’s work on policy for religion and education. His role has included contributing to the Council’s work on teaching about religions, intercultural education and citizenship. In particular, he conducted a study for the Council, exploring the feasibility of a European educational centre; part of its remit would be studies of religious diversity. In response to this, the European Wergeland Centre opened in Oslo in 2008. It describes itself as a resource centre on education for intercultural understanding, human rights and democratic citizenship. Jackson became its first professor, holding a visiting professorship at Oslo and Akershus University College, where it was originally located.

In addition, Jackson was a co-organiser of the first Council of Europe Exchange between leaders of faith communities and humanist associations. This was held in Strasbourg in April 2008. He was also part of the team that drafted the Recommendation by the Council of Ministers on teaching about religions and non-religious convictions, (published in 2008). His book Signposts: Policy and Practice for Teaching About Religions and Non-Religious Worldviews was published by the Council of Europe in 2014 to support those implementing the Council’s recommendations.

Jackson was elected a Fellow of the Academy of Social Sciences in 2010. In 2013 the Religious Education Association (USA) presented him with the William Rainey Harper award, (awarded to outstanding leaders whose work in other fields has had a profound impact on religious education).  Jackson was also given life membership of the REA. He is a life member of the Association of University Lecturers in Religious Education. In 2017 Jackson was awarded honorary doctorates from the Norwegian University of Science and Technology in Trondheim and the Norwegian School of Theology (MF) in Oslo. He is also a visiting professor in the Department of Humanities and Social Sciences Education at Stockholm University.

As a complement to his academic activities, Jackson is a keen jazz musician. He played jazz while at Lampeter with the Teifi Valley Jazz Band. Since the 1980s, he has played trombone for a band, Spicy Jazz. In 1987, he proposed the band leader and trumpeter, Humphrey Lyttelton, for an honorary doctorate from Warwick University. Lyttelton then played as a guest with Spicy Jazz and wrote the sleeve note for their recording, Coming of Age. After Lyttelton’s death in 2008, Jackson became a patron of the Humph Trust, established to raise money for young jazz musicians. Jackson is also a poet; a selection of his work has been published in Narrowboat Music (Grevatt & Grevatt).

University of Warwick. (2020). Professor Robert Jackson. Retrieved May 29, 2020,  from: https://warwick.ac.uk/fac/soc/ces/research/wreru/aboutus/staff/rj.

Jackson, R. (2015). Inclusive study of religions and other worldviews in publicly-funded schools in democratic societies. In: Stoekl, K. (ed.) The future of religious education in Europe. European University Institute, 2015. Retrieved from: https://cadmus.eui.eu/bitstream/handle/1814/37735/FutureReligiousEducationEurope_2015.pdf?sequence=1&isAllowed=y.

The European Wergeland Centre. Retrieved May 29, 2020, from: https://theewc.org/