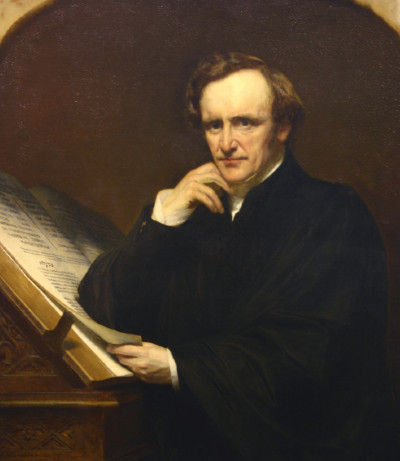 Rowland Williams (1817-1870) was Vice-Principal of St David’s College Lampeter for twelve years. He is famous as the man said to have introduced rugby to Wales. In complete contrast, he was also tried for heresy.

Williams was the second surviving son of a Welsh clergyman, another Rowland Williams, and his wife Jane (née Jane Wynne Jones). The younger Rowland was born at Halkyn, Flintshire. He went to Eton as king’s scholar in 1828 and became Newcastle medallist in 1835. He next entered King’s College, Cambridge; he was awarded Battie’s university scholarship in his first year. He was elected to a fellowship at King’s in 1839.

After graduating, he travelled in Europe and worked for a short time as assistant master at Eton. He was ordained deacon in 1842 and priest in 1843. In 1842, he went back to King’s College, where he worked as classical tutor for the next eight years. He was awarded an MA in 1844 and a BD in 1851. He also became interested in oriental studies; in 1848 he won a prize for a dissertation which compared Christianity and Hinduism.

Through his time at Cambridge, Williams remained very conscious of his Welsh identity. He was in active contact with London Welsh circles, wrote poetry under the pseudonym Goronva Camlan, and campaigned successfully against the proposed merger of the dioceses of Bangor and St Asaph. In 1849 and 1850, he wrote articles for the Quarterly review on Methodism in Wales and on the church and education in Wales.

The chance to become Vice-Principal as well as professor of Hebrew at St David’s College was attractive therefore. He could combine improving the educational standards of future Welsh clergy with his own academic work. At this time, he was widely expected to become the first Welsh-speaking bishop for 150 years. However, the college had always been handicapped by an inadequate financial base and there were allegations of administrative incompetence. Williams worked hard to improve the administration, scheme of work and academic standards of the institution. He was markedly successful, as well as being popular with the students.

Williams quickly introduced a set of college rules. Rule 5 told students ‘not to spend their time and money, or to risk their health and memory, in the practice of smoking’. Rule 6 said that ‘whatever time a student may require for relaxation, should be spent in healthful exercise, rather than in clownish lounging about the shops or market-place’. The Cambridge Football Club had been founded in 1839, whilst Williams was a student. At Lampeter, he is said to have introduced rugby, cricket and fives to the college. Therefore, St David’s College was the cradle of Wales’ national sport.

However, Williams could also be controversial. Influenced by F.D. Schleiermacher, Julius Hare and Samuel Taylor Coleridge, he held views that were many years ahead of their time. A gifted linguist, he was one of the few British theologians of his day to be fully abreast of the latest developments in German scholarship. In 1854 Williams was appointed select preacher at Cambridge; he gave a series of sermons in which he argued that everything doubtful in the Bible could be given up with little or no detriment to Christian essentials. The next year he published a selection of his sermons in a volume entitled Rational godliness. The reaction was fast and hostile. People asked whether Lampeter was a suitable place for ordinands to be trained; Williams was forced to resign his post as examining chaplain in the diocese of Llandaff. He tried to defend his views in Lampeter Theology (1856), but in doing this only made matters worse.

Also in 1856, Williams published Christianity and Hinduism, an extended version of his old Cambridge prize essay. The book is composed of a dialogue in which three Europeans and three South Asians, (a Buddhist, a Hindu and a Vedantist), debate the respective merit of Indian and other religions. The youngest of the Christians, Blancombe, is generally thought to represent Williams’ own views. Williams was awarded his DD in 1857.

Williams sparked even greater controversy by contributing an essay to the infamous Essays and Reviews. Seven leading scholars attempted to present the case for a new and critical approach to the Bible and to Christian doctrine. Williams wrote a review on his friend Baron von Bunsen’s work, entitled Bunsen’s Biblical Researches. He commended the critical approach to the Bible, already well-established in Germany. He also suggested a more acceptable interpretation of some traditional Christian doctrines, as well as emphasizing his favourite theme, that Old Testament prophecy is not predictive.  The volume produced an outcry. Together with H.B. Wilson, Williams was tried for heterodoxy before the Court of Arches of the Province of Canterbury. He was accused of denying the inspiration of scripture. The judgement sustained three charges against Williams, but dismissed the others. He and Wilson appealed against the verdict; in February 1864 the court reversed their judgement. The two men had won the right to academic freedom. The judgement has been said to be ‘the most momentous single judgement of that series which enabled Anglican clergymen to adjust their teaching in the light of modern knowledge.’

Meanwhile, back at Lampeter, Williams was involved in another row. A scholarship had been controversially awarded to George Lewellin, the son of the College Principal Llewelyn Lewellin. Williams regarded this as the theft of a scholarship by the Principal. He sent his version of events to the local press, without first warning the Principal of his intentions. A correspondence between the two men, conducted in the Welshman, followed. The row grew more and more acrimonious, involving the college visitor, Bishop Connop Thirlwall.  By the end of his time in Lampeter, Williams was ostracized in the college.

In 1858 Williams accepted the King’s College living of Broad Chalke with Bower Chalke and Alvedistone, near Salisbury; initially he limited its demands to the vacations. The next year he married Ellen, the daughter of Charles Cotesworth, a Liverpool merchant. There were no children of the marriage. Williams left Lampeter in 1862; he preached his farewell sermon in the college chapel on the text, ‘Princes have persecuted me without a cause,’ (Psalm 119:161). No member of college staff attended the service.  He spent most of the remainder of his life at Broad Chalke, where he was an active clergyman. Still he was resolutely Welsh. His last work, published after his death, was a poem ‘Owen Glendower.’

Williams was never robust and it was said he was rarely seen not smoking a cigar. He died prematurely on 18 January 1870 and was buried in the churchyard at Broad Chalke.  The west window of the church contains stained glass dedicated to his memory. There are also memorials to him in the college chapel at Lampeter and at King’s College Cambridge. In 2016, a sculpture of a rugby ball, celebrating the 150th anniversary of his introduction of rugby to Lampeter and therefore to Wales, was unveiled outside the campus library.