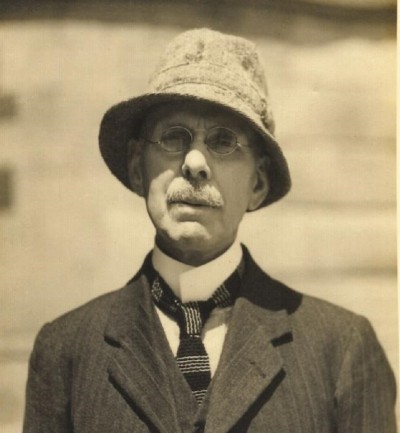 Thomas Stanley Roberts was born in the late summer of 1868, tragically just months before his father, Captain Thomas Roberts, was lost at sea off the coast of South America. The youngest of three siblings, Mary (1858-1876) and Gwynne (1860-1940), Roberts first attended the Fishguard National School, before enrolling at St David’s School in Lampeter.

In 1889 he began his academic career at St David’s College and although he was not a sportsman, he entered fully into college life regularly taking part in both the English and Welsh debating societies. In 1890 he was elected as the college magazine's sub-editor, following which he was appointed on to the Magazine's Committee. In his final year Roberts was selected as Senior Scholar, a role which carried additional responsibilities and duties within the college. He graduated with second class honours in history, having won two history scholarships during his college career. His education continued at Peterhouse, the oldest of the Cambridge colleges, founded by Hugo de Balsham, Bishop of Ely in 1284 and granted its charter by King Edward I. He studied for the Historical Tripos (the honours BA) and was awarded a first class pass in the examinations in Easter term 1897. He graduated BA in 1897 and MA in 1900, having been awarded the Prince Consort Prize in 1900, for the best dissertation involving original historical research.

Roberts continued at Cambridge as one of its Lecturers in History until 1903, when he was appointed to the vacant lectureship in history at St David’s College. His syllabus included the new subject of Welsh history, a topic which had previously been rather neglected by the college. However, Robert’s earlier teaching position at Cambridge was to have a significant influence on his later academic career. When David Davies, Lord Davies of Llandinam, a liberal politician and philanthropist, offered to endow Aberystwyth University with a chair in Colonial History, he stipulated that his former Cambridge tutor should be appointed to the chair. In October 1907 Roberts accepted the position, curtailing his career at his former college, although he evidently had a lifelong commitment to his Alma Mater, later serving on the College Council from 1929-1935.

On a personal as well as an academic level, 1907 proved to be significant for Roberts, being the year that he married Dorothy Susanna Johns with whom he had three daughters, Elizabeth, Dorothy and Ann. Professor Roberts, known affectionately by his students as ‘Stanley Bobs’ taught at Aberystwyth University for twenty-seven years, before retiring in 1934. During his career he contributed articles to the Ceredigion Historical Society and Aberystwyth Studies, a journal published by the university. Sadly, he died suddenly of a heart attack at his new Pembrokeshire home less than a year after his retirement.

One of his obituaries remarked that he was a devout yet unusually tolerant Anglican layman, with a sympathetic interest in Nonconformity. Roberts was a theologian and a Medievalist, intimately acquainted with the controversies of the Reformation, well informed on the history of the papacy as well as the English clergy and baronage of the eleventh and twelfth centuries. Professor Hugh Walker of St David’s College, claimed he was one of the most notable Welshmen of his generation and ‘… the most original historian I have ever known’.