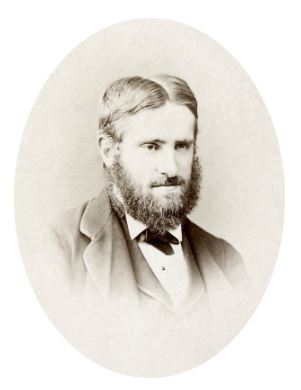 When in 1880 the Revd John James Lias, Professor of English at St David’s College, Lampeter, retired, his successor was a Fellow of Magdalen College, Oxford, William Augustus Brevoort Coolidge. Although his time at Lampeter was short, there is no doubt that he enjoyed it while it lasted, threw himself enthusiastically into its life, and, as a donation to the College’s Building & General Extension Fund in 1889 testifies, retained an affection for it after he had left.

Coolidge took up residence in Lampeter in September, 1880, in readiness for the Michaelmas Term, and his first impressions of the area were favourable: “It is a very pretty place and the walks among the hills very enjoyable”. There was one caveat: “the language is the great difficulty”. He quickly settled into the college, and his correspondence with his friend at Magdalen, the distinguished liturgical scholar Henry Austin Wilson (1854-1927), refers to the Library – “it has some very curious old books but there is no catalogue”. In addition to his teaching responsibilities, as well as English, these included History, Coolidge took on the editorship of the St David’s College Magazine, contributing himself, “A Visit to the Pays de Neff”, to the November, 1880 issue.

Then the unexpected happened; Coolidge had retained his Fellowship at Magdalen (in fact, he was to do so until his death), and in the Spring of 1881 he was called back to the college to undertake, initially unspecified, duties; this, sadly, involved resignation from his Lampeter chair, a resignation which was greeted with dismay both by the College Board and the student body. He left St David’s College towards the end of March, 1881.

So who was Professor Coolidge? He was an American, born in New York on 28 August, 1850. His father, Frederick, was a Boston merchant, and his mother, Elizabeth Brevoort, a member of a New York family which had made a fortune in the fur trade. One descendant of what became a widespread family was Calvin Coolidge (1872-1933), who was, from 1923 to 1929 President of the United States of America. Professor Coolidge’s father is a shadowy figure; the young boy was brought up by his mother, and her sister, Marguerite (‘Meta’) who was to be a formative influence, introducing him to his lifelong love affair with climbing in, and writing about, the Alps. Meta was one of the first female mountaineers and she and her nephew frequently climbed together.

Coolidge was educated firstly at St Paul’s School, Concord, New Hampshire, but, after his mother, sister Lil, and aunt moved to Europe, at Elizabeth College, Guernsey, before entering Exeter College, Oxford in 1869. He was elected a Fellow of Magdalen in 1875, and for twenty years taught History in the university, apart from the short period he was in Lampeter. He was ordained in the Church of England, as Deacon in 1882 and Priest in 1883, assisting, as his other duties and interests permitted, at St Laurence’s Church, South Hinksey (his only parochial experience) until he left Oxford in 1896. After 1896 Coolidge made his home in his beloved Alps, at the Chalet Montana at Grindelwald, and here he died in 1926. Chalet Montana was built for Coolidge, and here he amassed a comprehensive library of Alpine literature numbering some 26,000 volumes. By this date his personal climbing days were largely over; the ‘70s and ‘80s saw his greatest activity, and there were few peaks in the Swiss, French and Italian Alps that he did not climb. The lasting legacy of this activity was the astonishing number of his publications, in books and articles, on regions and mountains. He was completely fluent in French and German, as well as English, and this is reflected in the list of his works. In this latter year the University of Berne recognized his scholarly contributions to the history and geology of Switzerland with the award of an honorary Doctorate in Philosophy.