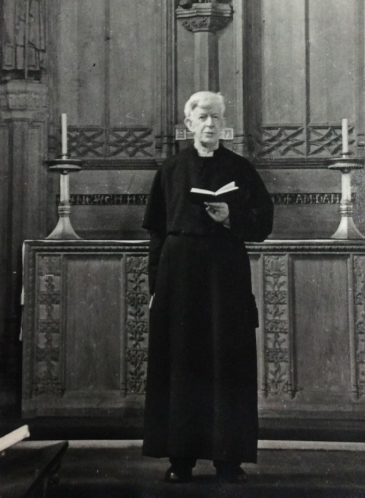 William Henry Harris (1884-1956) was associated with Lampeter for much of his life, either as a student or an academic.

Harris was born on 28 April 1884 in Pantysgallog, just outside Merthyr Tydfil. His parents were John and Anne Harris. He attended Merthyr Tydfil County School, and then did a variety of jobs after he left school. He started studying at St David’s College at the age of twenty-three. At Lampeter, he was Treharne and Senior Scholar, as well as English and Welsh (Creaton) Essay Prizeman. He graduated with a first-class honours BA in Welsh in 1910. He went on to Jesus College Oxford as Meyrick Research Scholar. There, he gained a B.Litt degree, and a BA and MA in Theology.

Harris was ordained deacon in 1913 and priest in 1914. His first curacy was at Ystradgynlais, on the River Tawe. He became assistant priest of Christ Church Swansea in 1917 and of All Saints Oystermouth in 1918. Then, in 1919, he returned to Lampeter. He was appointed lecturer in theology; he was promoted to professor in 1940. In 1941, to his great satisfaction, he was appointed professor of Welsh. Generations of students referred to him as ‘Pa Bill.’

Although he came from nonconformist stock, Harris became one of the leading Anglo-Catholics in Wales. At Lampeter, he was active in St David’s Catholic Guild. It was largely due to his influence that a daily eucharist in the college chapel was established in 1925, and that eucharistic vestments were worn from 1933 onwards. In addition, Harris wrote two penny pamphlets in 1931, Yr Eglwys Gatholig and Gweinidogaeth yr Eglwys.

Harris was a member of the committee of Emynau’r Eglwys (The Welsh church hymnal) from its beginning in 1934. The hymnbook, published in 1941 and 1951) contains his translations of hymns from Latin and Greek, as well as some from English. The book took an extreme Catholic viewpoint and was therefore controversial. Harris was a member of the Liturgical Commission established to revise the Book of Common Prayer. He also translated ‘The Office of Compline’ into Welsh, Cwmplin, Gwasanaeth diwedydd, (1941).

He was elected Prebendary and Canon of St Nicholas, Penffos at St David’s Cathedral in 1937 and treasurer in 1948. He was a fine preacher, drawing crowds to St David’s during his residence as canon. He was twice Special Preacher of the Welsh Festival at St Paul’s Cathedral, London. In the college chapel at Lampeter, he was said to preach sermons ‘which were very light soufflé, embellished with lashings of Anglo-Catholic cream’. His obituary in The Bulletin of the Lampeter Society commented ‘He read his sermons from piles of what looked like scrap paper and never varied a word from his manuscript.’

However, Harris was also a man of strong views. On 10 November 1940, the day after Neville Chamberlain’s death, Professor A.E. Morris, an alderman, attended the mayoral service in the Unitarian Chapel in Lampeter. Two weeks later, Harris prefaced his sermon in college chapel with the Trinitarian verses of the Athanasian Creed and the Collect for Trinity Sunday. He described this as an act of reparation for the action of ‘some among us [who] have recently associated themselves in public worship with those who deny the doctrine of the Trinity.’ The dispute that followed this took up a huge amount of time over the next eighteen months. In March 1941, Morris, who was later to be archbishop of Wales, threatened legal action against Harris if he did not apologize.  Most other staff were drawn into the fight, and the arguments dragged on until February 1942.

Unexpectedly, Harris was an enthusiast for Esperanto and even ran a weekly class in it at Lampeter. He preached in Esperanto at an Anglican High Mass in Birmingham in 1920, and also produced a Welsh-Esperanto dictionary. More predictably, he was a member of the Gorsedd of Bards, with the bardic name ‘Arthan’. 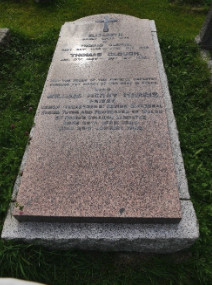 Harris married Dorothy Clough in 1924; they had two daughters, Llywela and Elizabeth. Dorothy’s wedding dress was used to make a set of clerical vestments for her husband. Harris’s daughters presented these to the college chapel in 2005; they are now housed within Special Collections. Harris stayed on the staff of St David’s College until his death on 23 January 1956. He died in hospital in London and was buried at Ruislip, Middlesex. He is commemorated in the college chapel by a chalice and paten.

Yates, N. (2009). From the ‘naughty nineties’ to the ‘swinging sixties’: the strange phenomenon of Anglican Ultra-Catholicism and Lampeter, Wales and the Oxford Movement. University of Wales, Lampeter