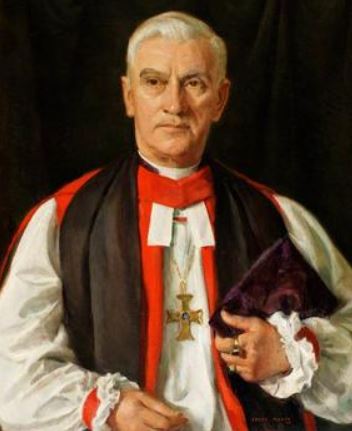 Alfred Edwin Morris (1894-1971) said of himself, ‘I was the first Englishman to become archbishop of Wales and probably I shall also be the last.’

Morris came from Lye, near Stourbridge. He was the eldest of the four sons of Alfred Morris, a jeweller, and his wife Maria Beatrice, née Lickert. His first school was at Stambermill, Worcestershire; he went on to St David’s College School, Lampeter. He served in the Royal Army Medical Corps during the First World War.

Once the war was over, Morris was awarded a senior scholarship to study at St David’s College, Lampeter. He became senior scholar taking a first in Theology in 1922. During his time there, he won the Hebrew prize twice, plus the Bates prize and the theological prize. He moved on to St John’s College Oxford, where, two years later, he gained another first in Theology. At Oxford, he won the junior Septuagint prize in 1923 and the junior Greek Testament prize in 1924. His next move was back to Lampeter, where he was appointed Professor of Hebrew and Theology to follow Tyrrell Green. He was ordained deacon at St David’s Cathedral later that year and priested in 1925. Also in 1925, he married Emily Louisa Davis; the couple had four sons and one daughter.

In 1932, Morris took his BD degree at Lampeter; Price wonders if this is the only example of a head of department becoming a postgraduate student in his own department!  Morris could be controversial and there were some clashes with other members of staff. One colleague accused him of attempting to learn Welsh with a view to becoming a bishop. He at once gave up his efforts to acquire Welsh. In an unpublished autobiography, Morris commented ‘The innuendo wounded me so deeply that I resolved there and then that I would never lend any colour to it, and I at once dropped my attempt to learn Welsh.’ Morris was also involved in a longstanding quarrel with Professor William Henry Harris.

Morris remained at Lampeter until he was appointed bishop of Monmouth in 1945. This was the first time he had been employed by the church; he was never a parish priest. In his new role he wrote three books in fairly quick succession, The Church in Wales and Nonconformity (1949), The Problem of Life and Death (1950) and The Catholicity of the Book of Common Prayer (1952). In 1957, he was elected archbishop of Wales, (remaining bishop of Monmouth). Bishop W. Glyn H. Simon of Llandaff was critical of his appointment, regarding Morris as thoroughly English. However, he was forced to admit that Morris was a good theologian.

Again, Morris was not afraid of controversy. He had firm views and only rarely suppressed them to preserve the peace. Preaching in Westminster Abbey in 1952, he said that the oath the queen would take at her coronation was a state document. It did not follow that members of the Church of England should accept the phrase ‘the Protestant reformed religion established by law’ as a description of their own faith. He also described nonconformists and Roman Catholics as intruders, arguing that the ‘Church in Wales is the Catholic Church in this land, and we cannot, without denying our very nature, yield one iota of this claim.’ In 1961, he waded into a ‘church v chapel’ controversy about whether pubs should open on Sundays. He published a booklet arguing that alcohol was a gift from God, although for some people it was dangerous and should be avoided. ‘There is no difference in drinking on Sunday and in drinking on any other day,’ he said.

Morris was widely known as upright, independent and courageous. He formed his own views, after spending a considerable time in study and those views were always clearly expressed. He was a better writer than speaker; his expository style was rather dull. Even those who opposed him trusted his integrity.

Morris was a very strong supporter of St David’s College all his life; he once said he loved the institution ‘from the bottom of his heart’.  He retired in 1967, moving back to Llanfair Clydogau, just outside Lampeter. He died at Hafdir, Lampeter, on 19 October 1971.