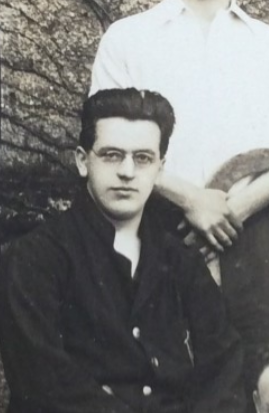 David Daniel Bartlett (1900-1977) was a member of St David’s College, Lampeter, as student, lecturer and then professor. He then served as Bishop of St Asaph for the last twenty years of his working life.

Bartlett was the son of a tailor, Thomas Bartlett, and his wife, Mary Anne. A native of Carmarthen, he was baptized in St Peter’s Church, Carmarthen. He attended Queen Elizabeth Boys Grammar School in the town. He is said to have entered St David’s College aged only sixteen. He became a Welsh Church Scholar and Senior Scholar from 1919 to 1920. However, he also managed to play rugby for the college. After graduating from Lampeter with a first in theology, he went on to further study at St John’s College, Oxford. In Oxford, he became a Casberd Scholar and was again awarded a first in theology. Still only in his early twenties, he returned to Lampeter in 1923 to become Lecturer in Theology. He was ordained deacon in the same year and priest in 1924. He took his MA in 1926, before obtaining a Lampeter BD in 1930. He also contributed the chapter on the Old Testament book of Numbers to New Commentary on Holy Scripture, edited by Charles Gore.

In 1931, Bartlett moved on to become Vicar of the challenging parish of Pembroke Dock, with Nash and Upton. The St David’s College magazine commented, ‘Pembroke Dock is a very important parish, but no better incumbent could have been chosen, and we feel sure that it will flourish under his guidance. In the Lecture Room, Mr Bartlett’s thoroughness and painstaking in explaining to us difficult problems – such as the North and South Galatian theories! – have always been appreciated. One reason for his success as a lecturer is the frankness with which he deals with any question that his class may desire to discuss.’

In 1938 Bartlett also became examining chaplain to the Bishop of St David’s, examining candidates for ordination and advising the bishop as to their suitability. During the war, he became officiating chaplain to the military establishments based in his parish. He remained at Pembroke Dock until 1946, when he returned to Lampeter to become Professor of Hebrew and Theology in succession to A.E. Morris. He was active in college life, chaplain to the college SCM, a member of the Lampeter branch of Toc H and a keen supporter of all the sports clubs. It was said of him, ‘His very example of humility, godliness and learning was the best guidance for which we could ask.

Bartlett stayed at St David’s College for four years, before being elected Bishop of St Asaph. His consecration service was held at Brecon Cathedral on 21 September 1950; a copy of the order of service is held in UWTSD archives. Sadly, his elder brother, Canon A.J. Bartlett, who was to have preached, died only a few days before the service.

Bartlett relied on pastoral influence, rather than the power of his office. His interest in the lives of his clergy and laity is described as having been ‘quite phenomenal.’ He had a kind and gentle outlook on life, quietly getting on with the job in hand. He would often think about a question from every angle, before coming to an opinion on it. He was a close confidant of Archbishop Morris, his old colleague at St David’s College. He also tended to be the bishop who represented Wales on central councils of the Church of England. Bartlett remained at St Asaph until his retirement at the end of 1970. He was awarded an honorary doctorate of the University of Wales in 1971. He also served as a member of council for St David’s University College.

Bartlett died on Easter Day 1977; his funeral was held in St Asaph cathedral on April 15. He was survived by his wife Lali and son John. It was said of him that he was honourable, trusted, modest and much appreciated.