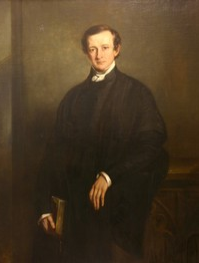 Edward Harold Browne (1811-1891) was second Vice-Principal of St David’s College Lampeter, before becoming bishop of Ely and then of Winchester.

Browne was the youngest son of Colonel Robert Browne and his wife Sarah Dorothea née Steward. He was born in or near Aylesbury. He was educated at Eton and then at Emmanuel College, Cambridge. He graduated BA in 1832 as twenty-fourth wrangler. He won the Crosse theological scholarship in 1833, the Tyrwhitt Hebrew scholarship in 1834 and the Norrisian prize in 1835. He was ordained deacon in 1836 and priest in 1837. In terms of his churchmanship, he was an enthusiastic Tractarian.

Browne held a fellowship at Emmanuel College for three years, before becoming a curate of Holy Trinity Stroud for a few months in 1840. Also, in 1840, he married Elizabeth Carlyon, a native of Truro. He next moved on to posts at St James’s, Exeter, and then at St Sidwell’s, Exeter. At St Sidwell’s, he offended many of his parishioners by preaching in a surplice.

Browne was appointed Vice-Principal and Professor of Hebrew at St David’s College Lampeter in 1843. The Principal, Llewelyn Lewellin, warned him ‘In this remote country it is well to be, in some degree at least, independent of external resources as to society.’ Mrs Browne later admitted that ‘we knew nothing of Lampeter, not even being quite sure as to where it was.’ It was a difficult time in mid-Wales; the Rebecca riots were in full swing, with angry farmers attacking toll-houses and toll-gates. The Vice-Principal’s house was close to a toll-gate; a rioter broke a window by throwing a turf through it.

Alongside the distress in the wider community, Browne found that St David’s College was in a poor condition. There were problems in the administration of the college, with everything under the Principal’s personal control. Browne later pointed out to Lewellin, ‘… the principal is at once tutor, bursar, steward, and even farmer and butcher …’ The college did not have an adequate endowment and many of the students were of a low standard. In 1847, Browne secured Oxbridge external examiners to ensure high academic standards; this was to be important for the future. Before he left, he offered a series of suggestions for the reform of the failing institution. He felt responsibility for management and finances should be shared, as in other university colleges, and that the records of college business should be open to inspection.

More happily, Browne was a good lecturer, devoting a great deal of time to his students. He lectured in dogmatic theology, church history, Hebrew and New Testament Greek. His lectures are said to have been ‘all that first-rate lectures should be.’ He later published his lectures in dogmatic theology in his Exposition of the Thirty-Nine Articles, (J.W. Parker, 1850-53). This became a standard work on the subject, going through many editions and being used as the textbook for candidates for ordination in the Church of England. Browne also managed to learn Welsh during his time in Lampeter.

Generally, however, Browne’s years at Lampeter were unhappy. He and Elizabeth lost three children there, including a daughter, Edith Dorothea, who died from scarlet fever. By the end of 1848, Mrs Browne was saying ‘If Harold remains here longer he will go mad!’ Browne left Lampeter in 1850 to become vicar of Kenwyn, just outside Truro. Alongside this, he was bishop’s chaplain for Cornwall. In 1854, he returned to Cambridge to be Norrisian professor of divinity.

Theologically Browne was generally conservative. He opposed many of the views expressed in the Essays and Reviews (1860); this controversial volume attempted to acclimatize in the Church of England the critical and historical study of the Bible. Browne contributed to Aids to Faith, (John Murray, 1861), a conservative response defending the traditional view of the Bible. In Browne’s article, ‘Inspiration,’ he argued that the church fathers and reformers differentiated between what we know of ourselves and what is revealed. His essay has been described as ‘the most judicious and perhaps the most important‘ contribution to the book. Two years later, Browne published The Pentateuch and the Elohistic Psalms, (Parker, Son, and Bourn, 1863), opposing John William Colenso’s views on the origin of the Pentateuch.

Browne was consecrated bishop of Ely in March 1864. In his new role, he sought to develop a recognisably modern infrastructure of oversight and organisations. Despite his high church sympathies, he worked tirelessly to enlist the help of lay people in every activity. He believed that a fundamental part of church governance was for clergy and laity to co-operate together, to meet regularly and to consult with each other semi-formally. This was innovative; he pioneered what would become the standard means for the Church of England to transact business. He was also a pioneer in his belief in a role for women, independent of their status as clergy wives or daughters. He was an early supporter of deaconesses. The Ely Diocesan Deaconess Home was established in Bedford in 1869.

In 1873, Gladstone nominated Browne as bishop of Winchester; he was enthroned on 11 December that year. There he continued many of the policies he had followed at Ely. In particular, he sought to develop the ministry of suffragan bishops. When Archibald Campbell Tait died in 1882, Browne was regarded as a strong candidate to succeed him as Archbishop of Canterbury. However, although he would have been a ‘very safe’ appointment, his age and health told against him.

Browne resigned from his bishopric in 1890, due to ill health. He died at his home in Shales, near Bitterne, Hampshire, on 18 December 1891. His obituary writer in The Times commented, ‘A man of kindly heart, gracious manners, and dignified demeanour, he realized some of the best ideals of an ecclesiastical ruler.’

Kitchin,  G.W. (1895). Edward Harold Browne, D.D., Lord Bishop of Winchester, and Prelate of the Most Noble Order of the Garter. A Memoir. Retrieved February 26 2021 from https://www.google.co.uk/books/edition/Edward_Harold_Browne_D_D/IeEKAAAAYAAJ?hl=en&gbpv=1&dq=%22edward+harold+browne%22&printsec=frontcover