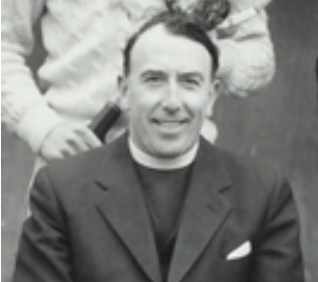 Charles Raymond Renowden (1923-2000) both studied and lectured at Lampeter, as well as serving in the Intelligence Corps and meeting Emperor Hirohito.

Renowden was born in Trealaw, in the Rhondda; his father, Charles, was the vicar there. Raymond’s younger brother, Glyndwr, also a graduate of St David’s College, eventually became chaplain-in-chief of the RAF. The family moved to Cardiganshire and Raymond attended Llandysil Grammar School. He joined St David’s College, Lampeter in 1941. At this time, pupils from Wycliffe College School in Stonehouse, Gloucester, had been evacuated to Lampeter. Many of the college facilities were actually out of bounds to undergraduates. Students had to live in lodgings and lectures were held in various halls round the town. Apart from studying in the library, attending chapel and possibly using the principal’s house, many students never entered the college buildings.

Renowden joined the Home Guard. He recollected that he was issued with ‘trousers up to my neck, … battledress top like a loosely hanging jacket and a helmet hanging over my ears at all angles. In addition, I was issued with a ‘rifle’ which had no trigger! It was presumably to be used as a club …’ He volunteered for RAF air-crew service in 1943. However, his service was deferred and he completed his final undergraduate year as a Pilot-Navigator-Officer cadet.

Renowden left Lampeter with a first-class degree in theology. Transferring to the army, he trained in the Grenadier Guards and the Army Intelligence Service. As a member of the Intelligence Service, he served first in India and then in Japan. During his time in India, he became fluent in Japanese. One of his first duties in Japan was to accompany the Emperor Hirohito on a visit to the ruins of Hiroshima, just after the dropping of the atomic bomb. Renowden noticed a small flower growing amidst the destruction and interpreted this as a sign of hope. However, he was later to suffer from the ill effects of the radiation, necessitating a serious operation on his shoulder later in his life.

After his return home, Renowden went as a scholar to Selwyn College, Cambridge and then trained as a priest. From 1951 to 1955, he worked as curate at Hubberston, near Milford Haven. He also married Ruth Collis in 1951; they had one son and two daughters.

Renowen next went back to St David’s College, Lampeter to work as philosophy lecturer. He became head of his department in 1957 and then senior lecturer in Philosophy and Theology in 1969. He was particularly interested in the intersection of philosophy and religion. None of his students were able to escape the big questions about the truth of Christianity.

In 1956, his wife Ruth, became a lecturer in mathematics, the first woman to be part of the permanent staff of the college. 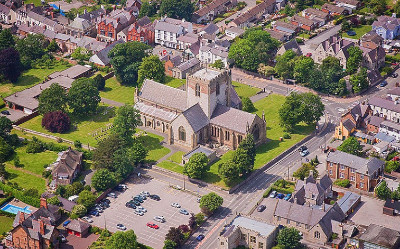 After sixteen years of outstanding teaching, Renowden left Lampeter in 1971 to become dean of St Asaph. As well as academic ability, he brought the skills of a Welsh-speaking pastor to his new role. During his time as dean, the cathedral increasingly the centre of diocesan life. He was heavily involved in committees and councils. He was responsible for the refurbishment of the cathedral library, allowing it to be used for meetings and conferences as well as research. He worked with Professor William Mathias to establish the North Wales Music Festival, launched in 1972 and held in the cathedral. Furthermore, for most of this period, Renowden was also vicar of St Asaph parish church and of two nearby villages. Yet he found time to write several books, including New patterns of ministry (1973) and The role of the cathedral today and tomorrow (1974). After retirement in 1992, he wrote an academic biography of one of his predecessors, A genial kind of divine: Watkin Herbert Williams, 1845-1944 (1998).