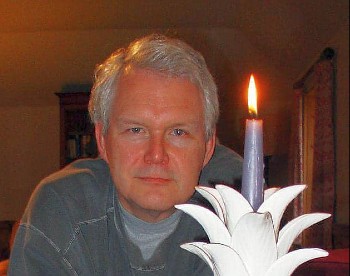 Craig Jamieson is Keeper of Sanskrit Manuscripts in the University of Cambridge.

In 2000, he brought out A Study of Nāgārjuna’s Twenty verses on the Great Vehicle (Mahāyānavimśikā) and his Verses on the heart of dependent origination (Pratītyasamutpādahrdayavyākhyāna), (Peter Lang). Jamieson produced critical editions of three texts attributed to the second century CE Buddhist scholar Nāgārjuna. Alongside these were English translations, based on the surviving Sanskrit originals but in the light of the more complete Tibetan versions and commentaries.

In The Perfection of Wisdom (Penguin / Frances Lincoln, 2000), he selected and translated extracts from the Aṣṭasāhasrikāprajñāpāramitā. Probably composed around 100 BCE, the text covers many significant Mahāyāna topics, including the career of a bodhisattva, the nature of emptiness and the development and application of the Perfection of Wisdom.  The teachings are presented in the form of a dialogue between the Buddha and one of his disciples, the arhat Subhūti. Jamieson’s text is lavishly illustrated with images from two palm-leaf manuscripts in Cambridge’s collection, the 10th century (985 CE) MS Add. 1464 and the 11th century (1015 CE) MS Add. 1643, manuscripts over one thousand years old.  The Dalai Lama wrote an introduction to the volume, explaining its relevance to Buddhist thought and to his own life story.

Jamieson was involved in Buddha’s word: the life of books in Tibet and beyond, Cambridge’s first museum exhibition of Tibetan art and artefacts displayed with manuscripts and printed books. The exhibits included early illuminated Buddhist manuscripts, specimens of skilfully illuminated wooden covers, scroll paintings brought back from the infamous Younghusband expedition and a gift from the Dalai Lama. Some of these had never been on display before. Items were gathered from Cambridge’s Museum of Archaeology and Anthropology, the Sedgwick Museum of Earth Sciences, the Fitzwilliam Museum, the University Library and Emmanuel and Pembroke Colleges. Jamieson has also curated many more traditional library exhibitions of books and manuscripts over the years.

He edits the Cambridge Buddhist Institute series, is a commissioning editor for the publisher Hardinge Simpole and serves on NACIRA, the National Committee on Information Resources for Asia.  Outside work, he has gone on Arctic expeditions in the Canadian High Arctic, Greenland, and Norway, he is interested in the music of Bob Dylan, he is a senior editor at the publisher EDLIS Café Press and coordinates a Dylan academic research group producing books such as Bob Dylan’s Hibbing (2019). He is also the badger videographer for the Wildlife Trust’s Overhall Grove.

Museum of Archaeology and Anthropology. (2020). Buddha’s word: the life of books in Tibet and beyond. Retrieved October 26 2020 from https://maa.cam.ac.uk/buddhas-word-the-life-of-books-in-tibet-and-beyond/