Edmund Simons is a heritage specialist, who has worked with Historic Royal Palaces, researched prehistoric food and helped develop a whaling station in South Georgia into a new science base.

After completing his masters, Simons spent the next six years working as Project Officer Historic Buildings for Oxford Archaeology. Oxford Archaeology is one of the largest independent archaeology and heritage practices in Europe. It undertakes a range of heritage related services, including commercial archaeological fieldwork ahead of development. Much of Simon’s work was associated with preparing Conservation Management Plans. The buildings he was involved with included Orford Castle and Framlingham Castle, Tyntesfield, Hampton Court Palace and Worcester city walls.

In 2006, Simons became head of the Built Heritage department of AOC Archaeology Group. During his time there, AOC became leaders in innovative survey techniques particularly laser scanning. After this, Simons worked as Principal Built Heritage and Conservation Consultant for MOUCHEL plc (2010 to 2011) and then Principal Built Heritage Consultant for Atkins (2012 to 2014) and URS Corporation (2014-2015). At Atkins, he was involved in large-scale Environmental Impact Assessments for major infrastructure projects, including the High Speed 2 rail scheme.

Alongside his commercial roles, Simons was involved in Historic Royal Palaces in a variety of capacities from 2000 to 2014. In particular, he was part of the Food History Team. He has also been an expert, a project mentor and a project monitor for the Heritage Lottery Fund.

In 2015, Simons became a Reader in Industrial Heritage at the University of Dundee. At the same time, he was appointed the first Heritage Director of the South Georgia Heritage Trust. South Georgia is a remote and inhospitable island in the southern Atlantic, about 800 miles south east of the Falklands. More than half of it is permanently ice covered and it is still accessible only by boat. It is also a relatively pristine environment, with major populations of seabirds and marine mammals.

Simons was particularly involved in the plans to develop the former Grytviken Whaling Station. The station was the first shore-based whaling station built for Antarctic whaling in the modern era. This means it is internationally important. Moreover, the settlement is closely associated with Sir Ernest Shackleton, who is buried in its cemetery. Simons developed a plan for the development of the whaling station. The Main Store, dating from around 1920, had been used to store spare parts, nuts, bolts, pipes and fittings for the whalers. When the whalers left Grytviken in the mid-1960s, they expected to return for another season. The tools and equipment in the store were left as they were when the whalers departed. As such the store provides a real insight into how the whaling station functioned. 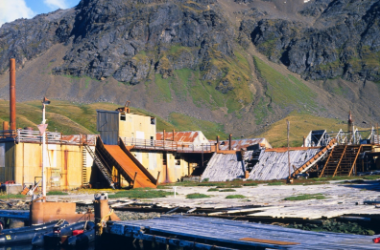 Having returned to Britain, Simons is currently working with English Heritage on a project concerning prehistoric foodstuffs. Consuming Prehistory aims to provide a prehistoric perspective on how foods were treated in Neolithic Britain. The project particularly focuses on bones and artefacts excavated from the Stonehenge monumental complex. Simons often works with the media, either as an expert advisor or on-screen. He was involved in the S4C series, Y Llys (2014), in which seventeen people stepped back in time to 1525. Set in Tretower Court near Crickhowell, the group lived, dressed and worked as people did in the reign of Henry VIII.  In Channel 4’s Timecrashers (2015), hosted by Sir Tony Robinson, ten celebrities were dumped in a different ‘time zone.’ The subjects time travelled to six periods, ranging from the Iron Age to the Edwardian period. Simons notes that he got ‘great reviews for shouting at celebrities.’

Simons has been the heritage masterclass tutor for the Royal Town Planning Institute since 2013. He is a fellow of the Royal Geographical Society and a Fellow of the Society of Antiquaries of London.