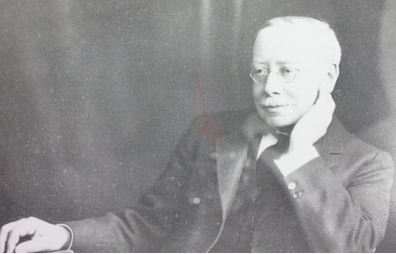 Thomas Frederick Tout (1855-1929) was possibly the most productive English medieval historian of his day.

Tout was the only child of Thomas Edward Tout, a wine merchant, and his wife Anne Charlotte née Finch. Thomas Frederick was born in Norwood, Surrey, and attended St Olave’s Grammar School, Southwark. He became head of the school and then, in 1874, won the Brackenbury History  Scholarship at Balliol College, Oxford. He achieved a first-class degree in history, followed by a second-class in literae humaniores (in ancient history, literature and philosophy).

After his graduation, Tout worked as a private tutor in Oxford for two years. Then, in 1881, Tout was appointed professor of English and Modern Languages and Lecturer in Logic and Political Economy at St David’s College, Lampeter. In 1885 he became Professor of History. His years at Lampeter were the making of Tout; he first trialled there most of the ideas with which he was later associated in Manchester. He appears to have taught for up to twenty-eight hours a week, sometimes to as many as eighty people. The students covered a huge range of abilities, from Welsh speakers who knew English as very much a second language to outstanding scholars. Before an extra history lecturer was appointed in 1884, Tout taught the entire history syllabus. He learned to master enormous stretches of history and to lecture without notes.

In 1883 Tout revised the curriculum, producing a complementary combination of extensive outline modules and intensive, themed, special-subject courses. The specialist courses used original sources. Gibson writes that Tout’s special subject course was a way of generating specializations together with deep knowledge gained from an insight into the relevant primary sources. Tout also pioneered a more demanding assessment system, using questions that required interpretation rather than merely reciting knowledge. He was later to argue that ‘the undergraduate training which is best for the education of the historian is also best for the politician, the journalist or the ordinary cultivated member of society.’

Tout was a prolific writer; it was at Lampeter that he began to publish. His first articles were book reviews for the St David’s College magazine, followed by reviews for the English Historical Review. He developed a strong interest in Wales and his first major article, on Welsh counties, was published in Y Cymmrodor. Paradoxically, he also contributed an article on Wales to the Dictionary of English History. However, Tout’s greatest contribution to scholarly writing at this time was his work on the Dictionary of National Biography. By 1900, he had written 240 entries, the equivalent of a single volume of the whole work. His writings included entries for three English kings, Edward II, Henry IV and Henry VI. However, his articles tended to concentrate on magnates and senior ecclesiastics, with a bias towards Wales and the Welsh marches. In contrast, Tout also wrote a number of successful textbooks, including a standard History of England for schools (in conjunction with F. York Powell).

Tout was college librarian at Lampeter from 1883 to 1890. His book budget was only £28 a year, but he was astute in begging books from other sources, for instance the 300 volumes of the Rolls Series donated by the government. With the external examiner, C.H. Firth, he also created a new library catalogue. However, his great contribution was the rescue and restoration of the Tract Collection, which although of huge significance, had been sadly neglected. He and Firth rearranged some of the contents, disposed of some that were too dilapidated to be saved, and had a large number of volumes rebound.

In 1890, Tout left Lampeter to move to Owens College, the future University of Manchester. The appreciation of his work was huge. On returning to the town for a testimonial dinner in November 1890, he is said to have been met at the station by a large number of students who took the horses from the carriage that had come to meet him so they could drag him to the college themselves. At Manchester, he worked hard to develop the small but promising school of history. He was able to implement the ideas about the pedagogy of history teaching he had developed in Lampeter. Again, students would study a special subject, through which they would be taught how history is made. In 1902, he persuaded the University Council to establish a publishing press, so the work of postgraduates could be disseminated. He was thus the founder of Manchester University Press, and Chairman of the Committee from 1902 until his retirement.

Tout’s most significant historical writing came late in his career. In 1908 he reviewed Eugène Déprez’s Études de la diplomatique anglaise, 1272-1485 in the English Historical Review.  This triggered an interest in administrative history, demonstrated in The Place of the Reign of Edward II in English History (1914) and Chapters in the Administrative History of Medieval England (6 volumes, 1920-31). He attempted to describe the running of the administrative machinery of government, for instance the Wardrobe and the Chamber, rather than concentrating on the king and parliament. His systematic calendaring and indexing of neglected sources were also to increase the productivity of other historians. It is said that his knowledge of the relevant material in the Public Record Office was such that even its own staff began to envy him. Tout continued his work on administrative history until a few months before his death.

Tout was president of the Historical Association from 1910 to 1912; he was elected a fellow of the British Academy in 1911.

Tout married Mary Johnstone, one of his early Manchester students, in 1895. The couple had two sons and a daughter, who lived to adulthood; sadly their eldest son died in infancy. Tout retired in 1925; to celebrate this his colleagues published Essays in Medieval History presented to Thomas Frederick Tout. Eleven of the twenty-nine contributors to the volume had been his pupils. Tout chose to return to his native London, settling in Hampstead. It was an active retirement. He was president of the Royal Historical Society from 1926; in 1928, he undertook a lecturing tour of the United States and Canada, including delivering the Messenger lectures at Cornell University.

Tout died at home in Hampstead on 23 October 1929. He had had a full, energetic, useful and happy life.