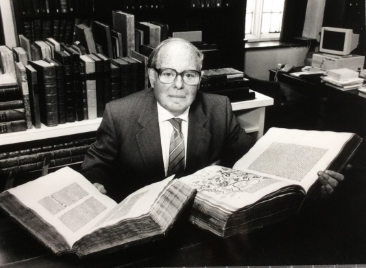 Rider was a native of Cambridge; he was later to name his home in Lampeter Caergrawnt, after the Welsh name for his home town. He attended the Perse School, before studying classics at Trinity College. After graduating in 1953, he worked as cataloguing assistant at the Institute of Education library, Southampton University, and then as assistant librarian at Queen’s College, Dundee. Alongside this, he worked for his professional qualifications; he was appointed Fellow of the Library Association in 1959.

He became Sub-Librarian at St David’s College in 1961, and therefore responsible for all aspects of library operation. His task was enormous. Before this, the library had been run by members of the academic staff, assisted by students. On one hand, the stock was priceless, containing medieval manuscripts and early printed works, plus a unique collection of 17th and 18th century pamphlets. However, the collection, at that time still housed in the Old Building, was haphazard and mostly uncatalogued. Rider’s most pressing task would be to set up and run a modern academic library for the members of the college.  The systems and procedures he introduced were used until the adoption of automation in 1989. They included developing a counter service, introducing photocopying facilities and reorganizing the library’s holdings. Having catalogued most of it, he knew his stock well!

A new library, designed to house 85 000 volumes and seventy-five readers, was opened by the Duke of Edinburgh in July 1966. However, it was soon found to be too small, and was quickly enlarged. Prince Charles re-opened the remodelled building in 1984. The rare book stock remained in the Old Building in what became known as the Old Library, (later renamed the Founders Library).

In 1989, the college appointed George Lilley as librarian, at professorial level. Rider continued as an able and loyal deputy until 1989, when he took early retirement. This enabled him to return to his first love, the magnificent rare books collection. For the next five years, he was Honorary Curator of the Founders’ Library.

Sadly, Rider died suddenly at his and his brother’s home in Lampeter on 4 January 1995. He was aged only sixty-three. For his funeral, a service was held at his home, following by a public service at St Peter’s Church, Lampeter. It was said of him, ‘Robin was a committed professional librarian of the utmost integrity, an incisive mind and wise and independent judgement, for whom nothing was ever too much trouble.’ Fittingly, a volume of essays, The Founders’ Library University of Wales, Lampeter, Bibliographical and Contextual Studies (Trivium Publications, 1997) was issued in his honour. In addition, he left unfinished a survey of printing and publishing in Lampeter and the surrounding area.