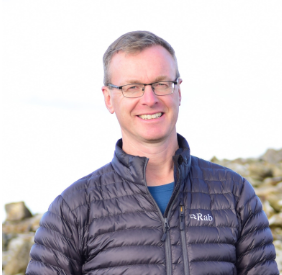 Toby Driver is an archaeologist and prehistorian.

Driver studied archaeology at the University of Southampton, before joining the Royal Commission on the Ancient and Historical Monuments of Wales in 1995. His job title is Senior Investigator (Aerial Survey); he has managed the Wales-wide reconnaissance programme for over twenty years.

Aerial photography is one of the most effective ways of recording sites and landscapes; indeed, it is sometimes the only means of discovering monuments. It includes observing and photographing the landscape from above, and then interpreting and mapping sites from the images produced. The use of a light aircraft means that several hundred miles can be surveyed in a few hours. Working from such a high viewpoint helps to clarify the layout of complex sites and to show up features which may be invisible from ground level.

In particular, the long, hot summer of 2018 provided perfect conditions for aerial archaeology. Many long-forgotten sites were revealed again as ‘cropmarks’ or patterns of growth in ripening crops and parched grasslands. In seven weeks of flying across Wales, Driver took around 5 700 photographs. Just from the Roman period, his finds included new marching camps at Five Lanes in Monmouthshire and Three Cocks at Gwernyfed Park, Powys, as well as forts at Carrow Hill, Monmouthshire; Three Cocks, and Graig-Olway Farm, near Usk.

Driver’s PhD, awarded by the University of Wales Lampeter in 2005, was entitled The hillforts of North Ceredigion: architecture, landscape approaches and cultural contexts. This group of over one hundred hillforts was little known and virtually unexcavated. Analysing the individual sites, Driver demonstrated that they were ‘sophisticated three dimensional spaces.’ He then built on this work by publishing Architecture, regional identity and power in the Iron Age landscapes of Wales, (BAR British series, 2013). At a more popular level, he has also published The hillforts of Cardigan bay, (Logaston Press, 2016). As he explains in the book’s acknowledgements, much of the content was shaped by questions he had been asked during lectures or guided walks.  He describes the people who built and then lived in the hillforts, writing about their patterns of daily life and discussing the artefacts discovered.

Driver’s Pembrokeshire – Historic landscapes from the air (Royal Commission, 2007) was also aimed at a non-specialist audience. He introduced aerial photography, and then examined six sub-regions of the county. Austin described the book as ‘a major contribution both to the academic study of Pembrokeshire landscapes and to public access to the archaeology and history of this beautiful part of the world.’ The volume is also beautifully illustrated.

Driver has co-directed excavations on Skomer Island, off the coast of Pembrokeshire, and at the Abermagwr Roman villa. On Skomer, he and his team discovered previously unknown Neolithic and Bronze Age ritual stone settings. They also demonstrated that the field systems may date back to at least the later Bronze Age. The site at Abermagwr, about eight miles south east of Aberystwyth, is the only recorded villa in Ceredigion, as well as the most remote villa thus far discovered in Wales. It was established around AD 230, but abandoned around AD 330 following a major fire. The building was comparatively rustic, with open fireplaces and clay floors. However, its contents included fragments of a high-quality cut-glass vessel, produced in the Rhineland.

In May 2021, Driver took part in the BBC programme Great British Railway Journeys, guiding Michael Portillo around Pen Dinas hillfort, on the edge of Aberystwyth. He explained the history and significance of the excavations of the site in the 1930s, and then talked about the ways in which new technology, including drones, are helping archaeologists explore the area today. Driver has also contributed to Derek Brockway’s Weatherman Walking. Away from antiquity, he was shown visiting Llandudno Pier in May 2021; his great grandfather designed its ornate metal work.

Driver is currently involved in the six-year EU-funded Ireland-Wales CHERISH project, examining climate change and coastal heritage in Wales and Ireland. The programme aims to raise awareness and understanding of the effects of climate change, increased storminess, and extreme weather events on the cultural heritage of reefs, islands and headlands of the Welsh and Irish regional seas. In particular, it focuses on the headlands and islands around Pembrokeshire, Cardigan Bay and the Llŷn Peninsula, as well as sites along the south and east coasts of Ireland.

Driver is a trustee of the Cambrian Archaeological Association and a fellow of the Society of Antiquaries of London. He has also taught for UWTSD’s archaeology department. He is married to Becky; they have two sons, Aric and Charlie.

Royal Commission on the Ancient and Historical Monuments of Wales. (2018). Abermagwr: the remote Welsh Roman villa which produced a unique cut-glass bowl and early evidence for the slater’s craft in Wales. Retrieved June 22 2021 from https://rcahmw.gov.uk/abermagwr-the-remote-welsh-roman-villa-which-produced-a-unique-cut-glass-bowl-and-early-evidence-for-the-slaters-craft-in-wales/