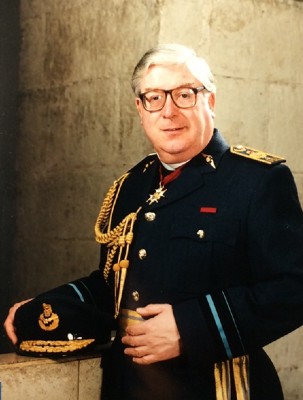 Brian Lucas grew up in Port Talbot, South Wales surrounded by extended family and living in a house which was ‘always full of laughter’. He came to St David’s College in 1959 and fully immersed himself in collegiate life. He joined the Dramatic Society, was elected as college representative to the National Union of Students and became one of the directors of Gownsman Publications, a limited company which administered the college magazine.

Upon graduating with a BA in humanities in 1962, Lucas studied theology for two years at St Stephen’s House, Oxford. He was ordained deacon in 1964 and priest in 1965, when he embarked on his first three years of ministry at Llandaff Cathedral, Cardiff. In 1967 he moved to the parish of Neath, where he was tasked with the challenge of building and establishing a new church on a large housing estate. He describes these three years as a period which prepared him ‘in full measure for what was to come.’

However, a fascination with aviation and his role as Honorary Chaplain to the Neath Squadron of the Air Training Corps, changed the direction of Lucas’s career. In June 1970, following the consecration by the Archbishop of Wales of the new church of St Peter and St Paul in the Cimla district of Neath, he was commissioned into the Chaplains’ Branch of the Royal Air Force. The following year he was posted to RAF St Mawgan in Cornwall as station chaplain. A second posting in 1972 took Lucas to RAF Luqa, Malta where he served for three years, before returning to Britain to take up a post at RAF Honington, East Anglia. 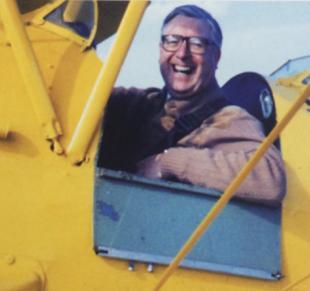 In 1979 Lucas was appointed Staff Chaplain to the Chaplain-in-Chief at the Ministry of Defence, a role which was followed by tours in Cyprus (1982-1985) and RAF College Cranwell, Lincolnshire (1985-87). Promotion to Assistant Chaplain-in-Chief resulted in Lucas’s final posting abroad, this time to Headquarters RAF Germany (1987-89). His chaplaincy responsibilities ranged from Viborg in the North of Denmark to Munich, and from Berlin to Sardinia.

After returning to take up his post as Assistant Chaplain-in-Chief at Headquarters RAF Support Command, Brampton, Lucas was appointed an Honorary Chaplain to Her Majesty The Queen (QHC). In 1991 he was promoted to the rank of Air Vice-Marshal, appointed Chaplain-in-Chief (RAF) and, by the Archbishops of Canterbury and York, as Archdeacon for the Royal Air Force. In November the same year he was installed as the Prebendal Canon of St Botolph in Lincoln Cathedral. Two years later, in the New Year’s Honours list, Lucas was made Companion of the Most Honourable order of the Bath.

Lucas retired from the RAF and resigned his Cannonry at Lincoln in 1995. The Archbishop of Canterbury granted him the title of Archdeacon Emeritus of the RAF. In 1996, the Bishop of Lincoln appointed him Canon Emeritus of Lincoln, when he was appointed to the Rectory of the Benefice of Caythorpe, Fulbeck and Carlton Scroop with Normanton in the Diocese of Lincoln. He retired from full-time ministry in 2003.

Despite the pressures of his professional career, Lucas was Honorary Chaplain to the Bomber Command Association, Coastal Command Association, the Worshipful Company of Horners (now Emeritus), and for many years, was Honorary President of No.3 Welsh Wing, Air Training Corps. Between 1998 and 2008 Lucas was Honorary Secretary of the Savage Club in Whitehall, having been elected a member in 1996, and was made an Honorary Life Member in 2018. In 2011 he was elected Chairman of the Governing Body of Sir William Robertson Academy, Welbourn, which he resigned from in 2018, when he was elected the first Chairman of the Board of Trustees of the Aspire Schools Trust.

Lucas has also found time to publish his memoirs, Reflections in a Chalice, two volumes on the great Gothic Cathedrals of France, A Glimpse of Glory and a selection of his sermons, Alive in Christ. He is married to his wife Joy, who is a graduate of the universities of Swansea and Hull, and they have three children and seven grandchildren.

Lucas, B (2011). Reflections in a Chalice. The Memoirs of a Practical Priest. Adastral Books.

About the Author (n.d.), Publisher Biography.