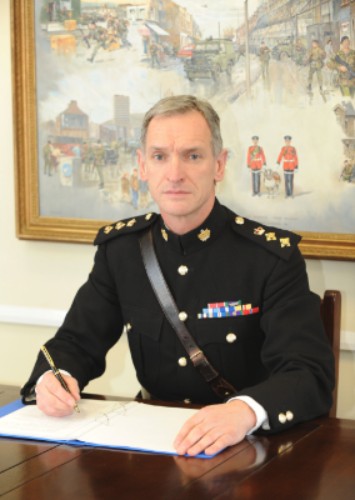 Andrew Williams was brought up in Gloucester before enrolling at St David’s University College in 1980 to read geography. He loved the remoteness of Lampeter.

Living in Esgairdawe, he often ran the many miles to and from the College to conduct his studies, a passion that set the tone for the rest of his life. He represented the College at Cross Country running, and captained the 2nd XI Soccer team.  Joining the University of Wales Officer Training Corps in his second year, he quickly rose to be a Junior Under Officer, before deciding upon a career in the Army.

He commissioned into the Gloucestershire Regiment in 1984. His early regimental duty was spent in the UK, Kenya and Berlin, together with several months each year leading the Regimental Biathlon Team in Norway. Short tours followed in the jungles of Brunei and Belize, as well as commanding a multinational company for the United Nations in Cyprus.

His junior staff appointments included those as the G3 operations captain in HQ 39 Infantry Brigade in Belfast for which he was awarded the Queen’s Commendation for Valuable Service, the G3/G5 operations/plans major in HQ Northern Ireland for which he was appointed an MBE, and as Military Assistants to both the Military Secretary and the Adjutant General.

He has considerable operational experience, initially in Northern Ireland as a platoon commander, and more recently in the Balkans, Iraq and Afghanistan.  He commanded the Staffordshire Regiment between 2003 – 2005 including operations in Kosovo and Iraq. He was upgraded to an OBE for his distinguished leadership in Iraq.

Joint credentials include being an instructor at the Joint Services Command and Staff College, and the Deputy Assistant Chief of Staff J5 (Policy and Plans - Middle East) at the Permanent Joint HQ. There he was primarily responsible for drafting options for the UK military contribution to Iraq between 2006 and 2008.

He joined the Royal College of Defence Studies after a year as a colonel within the predominantly US Combined Security Transition Command-Afghanistan.  There, he was specifically responsible for the reform and future design of the Afghan Ministries of Defence and the Interior. He was awarded the US Bronze Star Medal for this contribution.

On promotion to Brigadier in 2010, Andrew commanded 49 (East) Brigade before three and a half years as the Deputy Military Secretary – responsible for the career management of the Army.  During this time in Glasgow, he also became a representative on the committee of Combat Stress (Scotland).  He assumed command of The School of Infantry in June 2015 before early retirement to assume an advisory position with the global strategy firm Kearney in the Middle East.

In addition to his degree from the University of Wales, he is a graduate of the Army Staff College, and has a Master’s Degree from Cranfield.  Appointed by HM The Queen to the honorary position of Colonel, The Mercian Regiment in 2013, he sadly relinquished these responsibilities upon moving overseas.  He is married to Jacs – a former Army Nursing Officer he met whilst in Belize, and they have three grown up children. He still participates competitively in triathlons, and other cycling and running endurance events. He has regularly won various categories of several Mountain Marathons, the Scottish Islands Peaks Race, and is a previous winner of the Three Peaks Sailing/Fell Running Race, perhaps testimony to his early running days in the Welsh hills of Ceredigion.