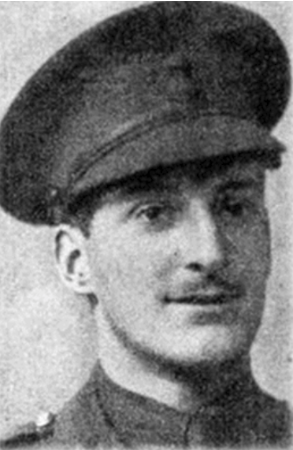 Charles Herbert Morris was born in 1892 in Welshpool, the youngest child of seventeen born to William and Jane Morris. Most of the Morris family worked in the local clothing industry, employed variously as drapers, dressmakers and milliners.

Charles, though, did not plan to follow in the family trade and having previously studied at the College School, he enrolled at St David’s College in 1912 with the intention of taking Holy Orders. Charles’ academic career was marked less by his academic achievements than by his sporting prowess. During his time in Lampeter Charles played for the 2nd XV rugby team, the hockey team, and the association football team; he earned his colours with the football 1st XI. As an individual athlete he took second place in the hurdle at the College sports day of 1914, and came first in the high jump.

Just five months after competing in the sports event, Charles left his studies and joined the North Wales Pals Battalion. He received a commission to the Royal Welsh Fusiliers with whom he served in many of the engagements on the Western Front. In 1916 he fought at the Somme in the Battle for Mametz Wood, where his regiment suffered an appallingly high number of casualties and deaths. In the summer of 1916, Charles was attached to the Royal Flying Corps as an observer in 59th Squadron, and the following spring he was detailed to photograph targets for the Royal Artillery in the area around Étaing in support of the Arras spring offensive.

The month of April 1917 would later become known in the Royal Flying Corps as ‘Bloody April’. The RFC suffered casualties of over a third and the average life expectancy of a new subaltern on the front line dropped to just eleven days. Charles’ RE8 two-seater reconnaissance and bomber biplane was one of six from Charles’ squadron which was shot down in a single day by a group of six technically superior German Albatros Scouts. Led by Rittmeister Manfred von Richthofen, ‘The Red Baron’. Charles was reported missing on 13 April 1917 and his body was never recovered. He was twenty-five years old.

He is commemorated on the Flying Services memorial in Arras, on the College Roll of Honour, and on the war memorial in Rhyl where his sister lived. Charles’ brother Edwin had died the previous year fighting with the Canadian Forces, and both brothers are jointly honoured on a plaque erected by their family at Christ Church in their home town of Welshpool.

“Lieutenant Morris has been in much fighting on the Western Front and took part in the taking of Mametz Wood, in which engagement he was one of three officers in his regiment who came out unscathed.”