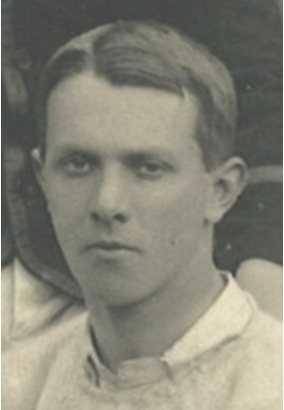 Frederick ‘Fred’ Seaton Smith was born in Monkseaton in Northumberland to Frank and Mary Smith. Frank’s occupation is recorded as a coffee plantation owner in the Tutor’s Register. Fred had been a border at St. Peter’s School in York before he enrolled at St David’s College in 1910. A keen sportsman, Fred played for the Cricket 1st XI, the Rugby 2nd XV, and the Hockey Team. He was also Captain of the Tennis Club.

During the Easter holidays of 1911 Fred married Martha Lilian Boyden, whose father, John Augustus Charles Boyden, was a Druggist and Chemist and the first Master of Beacon Lodge in Pocklington, in the East Riding of Yorkshire. Shortly after his marriage Fred’s academic career was suspended when, in June 1911 he and an ‘accomplice’ were sent down for twelve months for breaking into a student’s room and causing damage, an incident known as ‘ragging’. The severity of the punishment caused dissent among the wider student body and, in defiance of the College authorities, the guilty pair were carried on the shoulders of their fellow students in a grand procession towards the train station, from where they commenced their period of exile. This resulted in further punishments being meted out to the students who had taken part in the procession. The story appeared in local newspapers and postcards of the spectacle were printed as souvenirs.

On his return to Lampeter in 1912 Fred again made the local papers, on this occasion as one of a group of six students accused of attacking a fellow student during a heated debate concerning the disestablishment of the Church in Wales. When the case came to court the charges were dismissed and the complainant made to pay the costs, but the papers were full of the story for weeks. When Fred left Lampeter with a third class degree in 1913, he had certainly left his mark on the college.

Later that year he was ordained to the Curacy of St John’s in Bradford and in 1916 took up the curacy at All Saint’s Church, Leeds. For most of the duration of the war Fred remained a civilian but, in early 1918, he joined the Army Chaplains Department and was attached to the 13th Battalion of the York and Lancaster Regiments, the 1st Barnsley Pals.

The Battalion was attached to 94 Brigade, 31st Division which saw heavy fighting and suffered terrible casualties during the German offensive of 21 March 1918. The Division was moved to Flanders to rest, but was caught up in a fresh German offensive where they played a part in the Defence of Nieppe Forest. Following this they moved to Ypres and were involved with the Action of Tieghem. Fred was wounded at Ypres during the final days of the war and although he was evacuated to hospital for treatment at Wimille, he died of his wounds on 15 November 1918, four days after the Armistice was signed. He was thirty-one years old.

Fred was buried at Terlincthun British Cemetery, Wimille, in France and his headstone bears the inscription:

Fred is commemorated on the St Peter’s School War Memorial in York and on the College Roll of Honour.