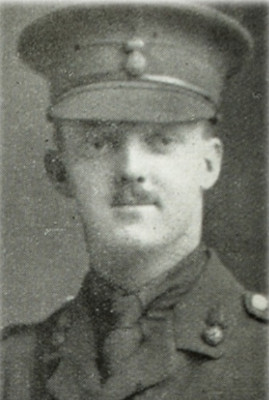 John Edmunds-Davies was born in Lampeter in 1893 to Walter and Agnes. He was an only child, his three siblings having died in infancy. Walter was an important local figure who owned the local drapers and in 1911 served as Mayor of Lampeter. John was educated at St David’s College School, Brecon College and Towyn County School. When war broke out John was enrolled at St David’s College.

John enlisted with the London Regiment of the Universities and Public Schools ‘Pals’ Battalion in September 1914 as a private but soon received a commission to the 10th Battalion of the Royal Welsh Fusiliers. In 1916 John left for France and was made the bombing officer of his battalion which, during that year, was engaged in many of the battles for the Somme.

Having survived the horrors of the Somme, John briefly returned home to Wales and, in October 1916, he married Olive Gwynedd Davies from Carmarthen; they honeymooned on the Gower at Langland Bay.

The following spring John’s battalion was involved in the Battle of Arras which took place between 9 April and 16 May 1917. John was mortally wounded at Vimy Ridge on the first day of the fighting. The newspapers reported that “he was injured by shrapnel, and although he came through an operation, he afterwards had a relapse and succumbed”. His parents and young wife had set off immediately for France but by the time they reached London they were informed of his death. John had died in Abbeville Hospital on 12 April at the age of twenty-three.

John’s obituary described him as “of a genial and kindly disposition and greatly liked by all who knew him. During his short career he had made a host of friends, by whom he will be sadly missed. He was a good all-round athlete and obtained his caps at school and college. He was a keen batsman and when playing his colours match at Towyn he performed the double hat trick, obtaining six wickets in one over, a unique feat”.

John is buried in Abbeville Communal Cemetery in France and memorialised on both the College Roll of Honour and the Lampeter Town Memorial. A bookcase and collection of books, now in the Founder’s Library, were given to the college in ‘affectionate remembrance’ by his parents and aunts. A stained glass window of ‘Justice and Sacrifice’ was installed in his memory in the local parish church of St Peter.

“When the news was received it cast a gloom over the town, the young Lieutenant being a favourite”