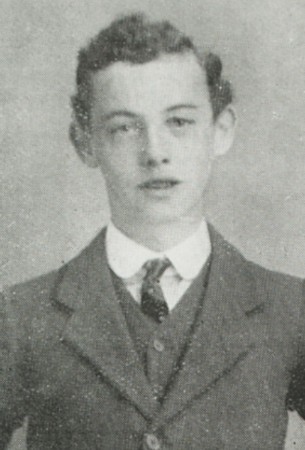 John Stanley Jenkins was born in Paddington, London, in 1896 to Welsh-born parents, Mary and David. Mary died when John was a young boy and with David’ second marriage John gained five siblings. By 1911 ‘Johnny’ was living with relatives in Lampeter. His aunt Elizabeth worked in a ‘fruiterer’s’ business while his Lampeter-born uncle, David, was employed as the ‘College Scout’.

John was a pupil at the College School where he played for the First XV rugby team, also acting as their Honorary Secretary. He entered the College ‘proper’ in October 1914 but his college career was to last just one term. John was a small man at 5’ 2¾” and at the outbreak of the war the height restriction was 5’ 3”. This was soon raised to 5’ 6” but then successively reduced as demand increased for reinforcements at the front. When, in December 1914, the height was reduced back to 5’ 3”, John’s stature was clearly near enough to the regulations to satisfy the recruiting officers. John wrote to his father to gain permission to join up asking: ‘You would not have me be a coward, would you?’ He enlisted with the Royal Naval Volunteer Reserve in January 1915.

John served initially as an Ordinary Seaman in the Benbow Battalion but was soon promoted to Able Seaman. In June 1915 he was transferred to the Anson Battalion which sailed for the Base Depot at Mudros, a strategically important location for the Allies as they attempted to seize control of the Dardanelles Straits. The Division was engaged in the fighting at Gallipoli and in February 1916 John was wounded and admitted to hospital at Mudros, before being transferred to the Hospital Ship H.S. Somali. In April he was well enough to return to the Base Depot.

John’s division was transferred from the authority of the Admiralty to the War Office and re-designated the 63rd (Royal Naval) Division. The Division left Mudros and sailed for Marseilles in May 1916 to join the fighting on the Somme. In November 1916 the Division fought in the Battle of the Ancre including the attack on Beaumont Hamel. The battle resulted in the deaths of 22,000 people in five days. John was among that number, killed in action on 13 November 1916 at the age of twenty.

John has no known grave but is commemorated on the Thiepval Memorial in France, the Lampeter Town War Memorial and on St David’s College Roll of Honour.

“a bright and charming young man”

From The Cambrian News and Merionethshire Standard, 22nd December 1916