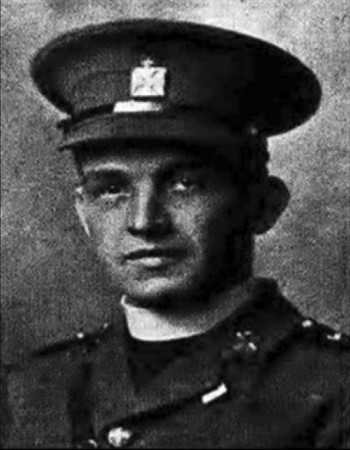 Thomas Glasfryn Jones was born seven miles north of Lampeter in Llangeitho in 1884. The third child of John and Mary Jones, his mother was the daughter of Lewis Davies, a Lampeter carpenter, and his father worked as a stone mason. Thomas attended Tregaron County School before enrolling in St David’s College with an entrance scholarship in 1902.

He studied for a BA in History with a Theology specialism and having graduated from Lampeter in 1905 he continued his studies at St Michaels Theological College in Aberdare. Following ordination Thomas was appointed Curate of Mostyn near Holywell where he remained for the next nine years.

In 1916 Thomas was offered the curacy of Bylchau near Denbigh but chose instead to enlist; he joined the Pembroke Yeomanry as a commissioned Chaplain 4th Class in the Army Chaplain’s Department with the 11th Battalion South Wales Borderers. Over five thousand army chaplains served in WW1 of whom 179 lost their lives. Their non-military task was to attend to the spiritual and emotional needs of the soldiers, but they were frequently embroiled in the thick of the battle, witnessing the death and the destruction of war and experiencing the same atrocious conditions as their charges.

Thomas’ division was engaged in battles in France and Flanders throughout the following year and on 24 March 1917, while ministering in the field to a wounded soldier, Thomas was hit by a sniper’s bullet. Gunshot wounds to his lungs and spine left him paralysed and he was evacuated to the Empire Hospital. Originally established to provide care to fee-paying patients from overseas, the London hospital had been commandeered by the War Office for the treatment of officers suffering from traumatic paraplegia, and brain injuries caused by bullet and shrapnel wounds. Less than three weeks after his admission Thomas died of his wounds. He was thirty-three years old.

Thomas’ body was returned to Llangeitho for burial in St Ceitho’s Churchyard. He is commemorated on the College Roll of Honour and on memorials in Llangeitho and Mostyn. Thomas is also remembered on the Roll of Honour at Holy Trinity Oswestry, the church of his fiancé Miss P. Roberts, and on the War Memorial gates at Cae Glas Park in Oswestry. During his time in Mostyn he had lodged with the Bithell family and when in 1925 Mr Bithell built a new family home, the house was named ‘Glasfryn’ in his honour.

“a good man and true, an eloquent and earnest preacher, and one who

made the great sacrifice, and who shared all the perils and dangers of the

men to whom he administered at the front”

From the report of the funeral, County Herald April 1917