Peter Wilkinson is a naval officer, who rose to be Deputy Chief of Defence Staff as well as National President of the Royal British Legion.

Wilkinson was born in Leytonstone, Essex, but due to family moves, attended the Royal Grammar School, High Wycombe. On leaving school, he joined the Royal Navy, studying at the Britannia Royal Naval College, Dartmouth. At the same time, he read geography at Lampeter, in the days when the Geography Department was the largest in the College.  He played rugby and squash and was Captain of the sailing club.  He was Treasurer of the College Rugby Club which meant he organised the distribution of tickets for Wales’ International games at Cardiff Arms Park.  He was also elected to the Executive Committee of the Students’ Union.

After graduating from SDUC and passing out of Dartmouth, Wilkinson joined submarines, serving in both diesel powered and nuclear vessels.  He undertook a range of duties as a junior officer and in 1987 was selected to attend the Commanding Officers Qualifying Course.  After this, he commanded HMS Otter, HMS Superb and HMS Vanguard. His final submarine, HMS Vanguard, was the first of the Vanguard-class ballistic missile-armed submarines. At a length of 150 metres with 15 900 tonnes displacement, it is one of the largest submarines manufactured in the UK.  Wilkinson has described the vessel’s slow movement round the oceans that enabled it to remain undetected.  (Higher speed means more noise!) On a patrol, the crew’s days passed in a schedule of keeping watch, sleeping and eating, with a variety of exercises and drills.  Contact with the outside world was extremely limited. The 150 members of the ship’s company received some information, including daily extracts from the newspapers and short weekly messages from family members; however, strict ‘no transmission’ rules meant that the crew were unable to send any replies or greetings home. 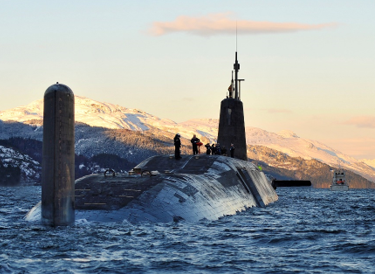 Wilkinson’s last operational assignment was as Captain of the 2nd Submarine Squadron based in Devonport.  Following this came a range of staff appointments in London and Portsmouth.  In 2001 he became Director of Naval Service Conditions, responsible to the Second Sea Lord for a range of retention policies. Three years later, he was promoted to Rear Admiral and became Naval Secretary, responsible for the career management of 40,000 Naval Service personnel from Able Seaman to Admiral.  His next posting was as Defence Services Secretary based both in the Ministry of Defence working for the Chief of the Defence Staff, and in Buckingham Palace working for HM Queen’s Private Secretary.  In 2007, he was promoted to Vice Admiral and became Deputy Chief of the Defence Staff (Personnel) charged with producing sufficient, capable and motivated personnel in all three services for operations, as required by the government of the day.

Wilkinson retired from the Navy in 2010, becoming the Clerk to the Worshipful Company of Cooks, one of the oldest of the city of London livery companies, in 2011.   Alongside this, he has been involved in a number of armed forces charities. He was National President of the Royal British Legion from 2012 to 2016, serving as its representative at national events such as the Cenotaph Service and the Festival of Remembrance.  He has been chairman of the maritime charity ‘Seafarers UK,’ a vice president of Combat Stress, chairman of the Forces Pension Society and a trustee of the Armed Forces Memorial.  He was president of the Royal Navy Football Association for six years and also an honorary vice president of the Football Association. He is currently chairman of the Submariner Memorial Appeal raising the necessary funds to build a new Memorial at the National Arboretum in Staffordshire.

Wilkinson was made a Commander of the Royal Victorian Order in 2007 and a Commander of the Order of the Bath in 2010. He was invested as an Honorary Fellow of UWTSD in 2013. He is married to Tracey (nee Ward), another Lampeter graduate; they have two adult daughters, Kate and Hilary. He lists his hobbies as genealogy, gardening and watching all sports.