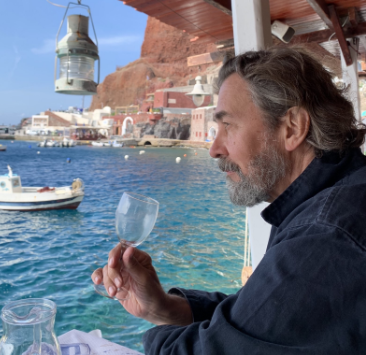 Adrian Mourby is best known as a journalist, travel writer and novelist, as well as a producer of plays and operas.

Mourby’s father, Roy, was a school teacher from Welshpool, who had served in the Air Ministry; his mother was Peggy, née Bradshaw. The family lived in Birmingham. Adrian entered St David’s College, Lampeter, in 1975. Intent on a career in film, he was involved in the New Rhymers Club, where he directed shows. He also produced short films and tape slide shows on campus. After graduating, he went on to Bristol University Film School. While a student he had a brief acting career, playing a barman in three episodes of the detective serial Shoestring.

He next moved to the BBC and rose to become a producer and director of television and radio plays. In particular, he produced a television adaptation of Sir Kingsley Amis’ The old devils, which won a number of international awards. At a less highbrow level, he both wrote for and was editor of The Archers.  In 1992 he left the BBC to become a freelance writer and occasional director of opera.

Mourby is the author of three published novels, and currently working on a six novel sequence. His first work of fiction was We think the world of him, (Hodder and Stoughton, 1995). Following redundancy, Duncan Lewis becomes a house husband; his wife returns to work full time. Mourby followed this with The four of us (Sceptre, 1997), featuring David Mosford, a history lecturer at a Welsh university. Wishdaughter (Seren Press, 2004) is a darker book. An opera correspondent, Bill Wheeler, travels to Israel to investigate Richard Wagner. He discovers a letter said to be so inflammatory that it will ensure Richard Wagner’s works will never be played in Israel. Mourby is currently working on a six novel sequence; of these, Dancing in the desert, Faithful in my fashion and A dark & knowing forest are complete and awaiting publication.   He is also currently writing a short story, A cruel country, about what it was like to be a student at Lampeter in 1976. He comments 'I'm aware that everyone who has ever been to Oxford has written a novel about the undergraduate experience. This is my contribution to the almost non-existent Lampeter oeuvre in English'.

Mourby wrote two series of BBC Radio 4’s comedy Whatever happened to …?, describing the afterlife of various characters from children’s fiction. The ugly sisters, played by Prunella Scales and Eleanor Bron, present themselves as victims of character assassination by Cinderella’s secret police. The Big Bad Wolf, killer of Little Red Riding Hood and the Three Little Pigs, is declared innocent. As a window salesman, the wolf has every right to be on the roof of the pigs’ house. Miss Hood’s grandmother is portrayed as ‘a bit of a goer’ who enjoys being tied up. Mourby won the Sony Silver Award for Creative Writing on Radio for the series. He followed up with a book Whatever happened to …?: the ultimate sequels (Souvenir, 1997). The characters featured included Jane Eyre, Jim Hawkins from Treasure Island and Dorothy Gale from The wonderful wizard of Oz.

Mourby is a prolific traveller and travel writer, visiting over twenty countries in 2008 for instance. He has walked on the Great Wall of China, set foot in Antarctica, sat with gorillas in Rwanda and gone on safari in Tanzania, Botswana and Namibia. In 2017 he published Rooms of one’s own: 50 places that made literary history, (Icon Books). He followed his literary heroes round the world, attempting to explore the living and working spaces of famous writers. The places featured ranged from J.R.R. Tolkien’s Oxford to Somerset Maugham’s Bangkok through James Joyce’s Paris and George Sand’s Venice. The volume was highly commended in the Best Narrative Travel Book category of the 2018 British Guild of Travel Writers’ awards. In Rooms with a view: the secret life of grand hotels (Icon, 2018), Mourby told the secret stories of fifty of the world’s grandest hotels. He has also written AA guides to Venice (2007) and to Brussels and Bruges (2008), as well as contributing to several Dorling Kindersley Eyewitness guides.

Mourby is possibly best known as an opera buff. He has produced several operas, including Handel’s Semele, (staged in Malta, 2002); Mozart’s Così fan tutte (Oxford, 2004), and Mozart’s Marriage of Figaro (Blewbury Festival, 2006). Mourby has also written many programme essays; the companies he has worked with include the Royal Opera Covent Garden, English National Opera, Welsh National Opera, the Wienerstaatsoper and the Grand Théâtre de Genève. He is a columnist for Opera now magazine and was the creator and writer of Tristan and Matilda, a long-running comic strip in that magazine. In 2007 he won the Fondazione Festival Pucciniamo’s annual Special Award for Opera Journalism. He leads opera tours to Italy nearly every summer.

Mourby has written for most of the British ‘quality’ newspapers, including many, many articles in The Independent, Guardian and Times Educational Supplement. Mourby says that, like just about every British writer, he lives in North Oxford with his wife and two cats!

Mourby, A. (2013, Jun 15). The Guardian: Family: 'I'll never measure up to my dad': My father had a dignity that few men show these days, says Adrian Mourby. He was a good husband, parent and grandfather. In short, he was a grownup. Guardian, The (London, England). Retrieved from https://infoweb.newsbank.com/resources/doc/nb/news/146F01BEC286B698?p=UKNB

Mourby, A. (2013, Nov 30). The Guardian: Family: A celebration of Roy and Peggy: After his mother's death, Adrian Mourby had to sort out the house in which he'd grown up. It was a challenge, dismantling what was left after more than 60 years of an exceptionally happy marriage. Guardian, The (London, England). Retrieved from https://infoweb.newsbank.com/resources/doc/nb/news/14A6B860D7F96F98?p=UKNB