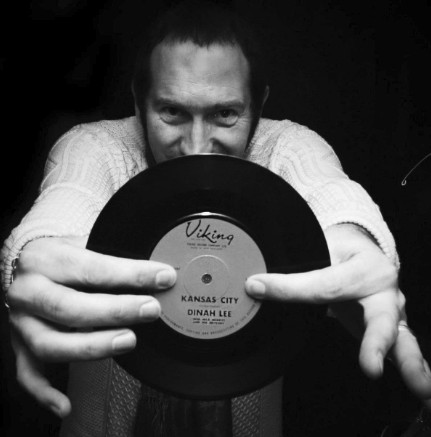 Andy Lewis is a disc jockey, musician and record producer; his achievements include playing bass with Paul Weller.

Lewis’ interest in music began early; his boyhood dream was just to be able to stand up and play for people. He thinks he did his first proper gig at a youth club in a church hall, when he was about fourteen. He came to St David’s University College Lampeter in 1988 to study History and Victorian Studies. He used to DJ as a student. He remembers that he had two things no-one else had: a car and a massive collection of records. He would drive to Andy’s Records in Aberystwyth and persuade Andy to get him promos to play at the Student Union discos. Lewis played a mixture of 1960s and indie material. He comments that it was a fantastic time to be discovering new music. However, he also says, ‘I was the only mod in the village.’

After he graduated, Lewis went home to London. Alongside working as a postman, he got a guest spot to DJ at Wendy May’s Locomotion. This was his first big break. Wendy May’s club night on Friday evenings, at Kentish Town’s ‘Town & County Club’ regularly pulled in 2000 clubbers. It features in Nick Hornby’s book 31 Songs. In 1993, Lewis helped to set up what became known as Blow Up, a Saturday night event in a room above the Laurel Tree, a pub in Camden Town. Before long, it was filled to overflowing every Saturday night. Blow Up influenced the style and sound of a generation. Time Out’s London Calling described it as ‘the breeding ground of the Brit Pop sound.’ Forrest commented that it pushed you to the ground and kicked cool in your face. The clientele of Blow Up included members of the band Blur. They were impressed enough to take Lewis as support DJ on their Parklife tour. He packed his record decks into the back of his car, and followed their minibus. In 2001, he began to present a weekly show, The Andy Lewis Indulgence, for the Internet broadcaster www.soul24-7.com. This led to offers of work from all over the world.

However, Lewis’ first love was always making music; he plays bass guitar and occasionally cello and keyboards. With Pete Twyman, Miles Chapman and Wesley Doyle, he formed the Britpop bank Pimlico. Their LP, Housebound, came out in 1998. Later, Lewis, Twyman and Chapman, together with Alex Richards, made up the Red Inspectors. Their first album Are we the Red Inspectors? Are we? came out in 2011. It covers a wide variety of styles – from mod through eastern influences to easy listening. Lewis says, ‘My own personal take on it is that it’s a bit like watching an episode of The Sweeney – there’s incidental music, then someone doing a turn in a pub, etc.’ He has also played for Spearmint.

In 2005, Lewis signed for the Acid Jazz record label as a solo artist. His first album on his own was Billion Pound Project; this featured a number of guest vocalists, including Keni Burke, Bettye Lavette and Reg King. The album was successful, selling around 10 000 copies worldwide. However, Lewis still needed to do ordinary work This included roadying for the band Dogs, at the time touring as a support act for Paul Weller. Lewis’ old acquaintance Phil Jupitus introduced him to Weller and eventually Lewis showed the former leader of The Jam  a copy of Billion Pound Project and a CD with some demos on it. Weller offered to contribute to Lewis’ next album, (You Should Be Hearing Something Now, 2007). They collaborated on a hit single, “Are you trying to be lonely?” Following on from this, Lewis repaid the favour by playing bass and cello on Weller’s album 22 Dreams. After this, Weller invited him to join his live band as bass player; he played his first gig in March 2008. Lewis comments that he went from being a fan of Paul Weller to playing with him. As well as performing live, he contributed to the albums, Wake up the Nation and Sonik Kicks, He left Paul Weller’s band in 2016.

In complete contrast, Lewis has also made an album, Summer Dancing, with Judy Dyble, a founding member of the folk rock group Fairport Convention. Lewis commented ‘with Judy’s words and my bucolic melancholia this was the kind of record I always wanted to make.’ Jude Rogers commented in The Guardian, ‘Together, this odd couple have made a fittingly odd, sweetly sunlit album, full of psychedelic pastoralism edging nervously into atmospheric electronics, sounding like a shyer take on cult late 60s bands …’

Behind the scenes, Lewis produced Magnus Carlson’s Swedish language but Northern Soul influenced LP, Den långa vägen hem. This shot to the top of the Swedish charts. He has worked with Bluetones, Lisa Stansfield, Louis Philippe and even Gabriella Cilmi, as well as remixing many others. He still keeps his hand in as a DJ; he presents a weekly online show on Soho Radio. He says of himself, ‘I just plan to keep making records that people will like … As long as I can keep playing records and making music, I’ll be happy.’