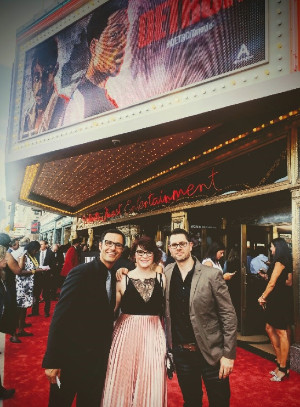 Cara Tallulha Davies works as a visual effects producer in the film industry.

Davies was born in Bridgend and studied Media Production at the University of Wales Lampeter. When she graduated in 2007, she found work at the London studio, Framestore. Cara started out in CG Animation as a production assistant, before moving into VFX as a coordinator in 2009, eventually working up to becoming VFX Producer in 2016 at Image Engine in Vancouver, BC. Visual effects are defined as the alterations made to the visual component of a work through special photographic techniques, optical printing, or post-production digital effects. These are mostly effects that are too expensive, too dangerous or physically impossible to achieve by conventional photography. They may include computer generated images, character animation, 3D animation, 3D modelling and digital matte painting.

The first film Davies worked on was The Tale of Despereaux, (2008). Based on a children’s book by Kate DiCamillo, the animated movie describes an unusually brave mouse who makes friends with a gentleman rat. The mouse then helps to restore happiness to a sad kingdom. The cast included Matthew Broderick as the voice of Despereaux, also Dustin Hoffman, Emma Watson and Robbie Coltrane.

Davies worked as visual effects coordinator on the science fiction blockbuster Avatar (2009), directed by James Cameron. The film features a paraplegic ex-marine, played by Sam Worthington. His consciousness is implanted in an alien “avatar” sent to befriend a peaceful tribe, whose habitat is threatened by exploitative mining. The film is broadcast in 3-D. The actors were turned into blue aliens, and a vivid landscape of exotic flora and fauna, fantastic creatures and epic battle scenes was added. Among its multiple awards, Avatar won an Oscar for visual effects and a BAFTA film award for best special visual effects. Davies commented, ‘For me it was a great learning curve and I gained a lot from working on a James Cameron film. 3D has been around for quite a while but I think this is the only film that you can really see how much of a difference it makes.’

Davies’ next studio, after several projects at Framestore,  was Aardman Animations, in Bristol, where she worked as a Technical coordinator on The Pirates! Band of misfits (2012) for 19 months.

In 2012 she moved to Vancouver BC, to be Senior VFX Coordinator at Image Engine.

During her time at Image Engine she has been able to continue her career progression further, moving into a Production Managers role. In “American Sniper”, she got to meet and collaborate with Clint Eastwood and Bradley Cooper. She then progressed to producing her first project, “Independence Day: Resurgence”

As a VFX Producer, she manages the overall show set up and budget, plans and executes the schedule with the Manager, carries out client communication, oversees and directs supervisors and production as needed, and ensures the team is on track for delivery within creative and financial briefing and budget. When not on a show, a Producer typically bids shows for the studio - from script breakdowns to finished shoot visuals with prospect clients.

The films she has worked on include Logan (2017), directed by James Mangold, the third instalment in the Wolverine trilogy. Wolverine, the lead character, and his mutant companion, Charles Xavier, defend a young mutant, Laura, from the villainous Reavers.  Although Logan is a comic book movie, the visual effects needed to emphasize the story, rather than to overwhelm it. The Image Engine team, including Davies, delivered almost 300 shots. They created lifelike digi-doubles of the film’s main actors, as well as mutant powers and adamantium claws. Logan is a violent film, with every punch and kick hitting home. To ensure the safety of the actors, Image Engine made full digi-doubles for the film’s stars, as well as for the numerous stunt actors who filled in for them. Writing in The Times, Kevin Maher described Logan as a work of genius.

In a complete change of style, Davies worked on Detroit, (directed by Kathryn Bigelow and also issued in 2017). The period crime drama examines the race riots that shook Detroit in July 1967, following a police raid on an unlicensed club. Image Engine contributed to 199 ‘invisible’ visual effects shots. They augmented locations from outside Detroit and added effects including blood, fire and smoke to the developing riot scenes. Much of the film was shot in Boston, Massachusetts; Image Engine used computer-generated images to recreate 1960s Detroit, often working from contemporary black and white photographs.

More recently, Davies has been involved in the Netflix drama, Lost in Space and the Disney+ series The Mandalorian. Part of the Star Wars franchise, The Mandalorian begins five years after the events of Return of the Jedi. The Mandalorians are a warrior people who have often clashed with knights of the Jedi order. The series stars Pedro Pascal as a lone gunfighter in the outer reaches of the galaxy, far from the authority of the New Republic. The visual effects have included creating androids and digital doubles, as well as vast digital environments and deadly man-eating arachnids.

Now hugely experienced, Davies is both detail-oriented and passionate about her work.

Maher, K. (2017, March 3). A Wolverine to wolf down – the big film. The climax to the X-men franchise is a significant work of movie genius, says Kevin Maher. The Times. Retrieved June 18 2021 from https://infoweb-newsbank-com.ezproxy.uwtsd.ac.uk/apps/news/document-view?p=UKNB&docref=news/162E6ABB310F0948