Graham Hoyland is a writer, documentary maker, sailor and mountaineer. He was the fifteenth Briton to climb Everest.

Hoyland grew up in the very rural county of Rutland. He remembers climbing into an old bath tub, when he was around seven years old. He sailed down a small river, brushing past branches and seeing new vistas downstream. He decided then that he wanted to be an adventurer. He studied at Oakham School, a leading independent establishment.

Hoyland went on to read English literature at St David’s University College. At Lampeter, he was a member of the student mountaineering club and also the Roof Ramblers. This was later to lead him into climbing Everest. After graduating, he joined the BBC as a producer and director. He worked on a wide variety of programmes, ranging from Dragons’ Den to Around the World in 80 Faiths and The Other Boat Race.

Alongside this, Hoyland’s fascination with mountains continued.  When he was thirteen, he had met his distant relative, the mountaineer, surgeon and missionary, Howard Somervell, (known in the family as Uncle Hunch). Somervell had been a close friend of George Mallory and a member of the 1924 Everest expedition. Somervell had attempted to reach the summit with the expedition leader, Edward. F. Norton. They got within 1 000 feet of the summit, before taking the decision to turn back. On their descent, they met Mallory with his climbing companion, Sandy Irvine; Mallory outlined plans for his own attempt on the summit. He had also forgotten his camera; Somervell lent him his Vest Pocket Kodak camera. Mallory and Irvine were never to return; their fate remains mysterious. Years later, Somervell told the young Hoyland ‘So if my camera was ever found, you could prove that Mallory got to the top.’ The lad was entranced by the tale.

Hoyland says of Everest ‘I have spent over two years of my life on that mountain, returning there again and again,’ and ‘It is a moral crucible in which we are tested, and usually found wanting. … Twice Everest has nearly killed me. But I find it utterly addictive.’ He first climbed the mountain in 1993, only the fifteenth (or seventeenth) Briton to do so. He has commented that the summit is little bigger than a dining room table. 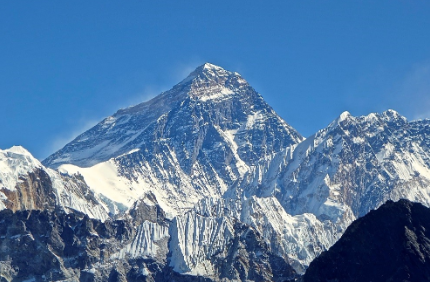 Hoyland eventually persuaded the BBC to fund an expedition to search for Somervell’s lost camera; the programme was commissioned in 1998. If successful, it would inevitably involve finding the body of either Mallory or Irvine. Furthermore, Kodak, the manufacturer of the camera, believed that if the film had been exposed and then kept at sub-zero temperatures, it was likely any photographs taken could be developed. In 1975, Wang Hung-bao, a Chinese high-altitude porter was said to have found the body of an ‘English dead,’ at an altitude of around 26 000 feet. This could only have been either Mallory or Irvine. The American-British expedition, involving the BBC, set out to search for this corpse. Sadly, Hoyland was hit by altitude sickness and so forced to return to Base Camp. However, his fellow climbers did indeed find Mallory’s corpse, face-down at the bottom of a scree slope. Having removed his possessions, they buried his body in the rocks and read over it a formal Committal Service.

In 2006, Hoyland went back to Everest, this time dressed as Mallory had been. Using the fragments recovered from Mallory’s corpse, two tailors created exact replicas of Mallory’s clothing in forensic detail. One suit, made to Mallory’s measurements, was to be exhibited. The other set of garments was made for Hoyland; he was to test them to see if they were adequate for a successful attempt on the summit. He said ‘First impressions were of beautiful natural materials … There were something like eight layers of material around my waist and yet it all felt warm, light and comfortable.’ Hoyland discovered too that he still had great freedom of movement. He believed that provided the weather remained fine, ‘Mallory and Irvine could have reached the summit comfortably wearing this clothing.’ However, in the end, Hoyland reluctantly concluded that appalling weather conditions and low barometric pressure meant that Mallory and Irvine could not have completed their ascent. He has written of Mallory ‘What he didn’t know was that the rapidly falling air pressure was effectively making the mountain higher, and that the incoming blizzard was going to make his clothing very thin indeed.’

Hoyland is an accomplished sailor, as well as a mountaineer. He comments that the two activities have some similarities, saying that ‘Both … involve uncomfortable battles with the elements interspersed with short moments of pleasure, and both seem to attract similar personalities.’ Having climbed Everest and Denali (formerly known as Mount McKinley) and sailed across the Southern Ocean to Antarctica, he conceived an ambition to complete a voyage across the seven seas and to the top of the seven summits. His ‘Seven Seas, Seven Summits’ project involves him climbing the highest mountain in each continent, alongside sailing the seven oceans. He hopes to be the first person to achieve this. In 2009, he purchased a second-hand sailing boat; he used this to sail the North Atlantic.  Thus far, he has achieved five of the seven peaks, with only Mount Vinson in Antarctica and Carstensz Pyramid in Australasia remaining. For the oceans, he has sailed the Arctic, Southern, North Atlantic and Indian Oceans, with the South Atlantic and North and South Pacific Oceans still to go. He has said ‘The sea scares me more than mountains. It can really feel like it’s out to get you and sometimes you feel very vulnerable.’

Hoyland is the author of four books. As well as The last hours on Everest: the gripping story of Mallory and Irvine’s fatal ascent, (HarperCollins, 2014), he has written Yeti: an abominable history (HarperCollins, 2019). After describing finding unexplained footprints in the snow, he chronicled supposed sightings of the mythical seven-foot tall beast with feet said to point backwards. He then went on to discuss other beasts featured in contemporary folklore, including the Loch Ness monster, and Bigfoot, the North American version of the yeti. Writing in The Times, Richard Morrison commented ‘So Hoyland’s book is not so much an abominable history of the yeti as of human gullibility.’

In complete contrast, Hoyland realized that the English season of Spring moves north at around the speed of a person walking. He decided to walk from the south coast to the Borders for the joy of seeing the Spring emerge in the various areas he passed through. Starting in Christchurch, a few miles east of Bournemouth, he reached the Scottish border at Gretna Green on June 20, the last day of Spring. Walking along a labyrinth of ancient footpaths, he marked every mile by planting an acorn. He described his journey in Walking through Spring, (HarperCollins, 2016).

Hoyland’s most recent book, Merlin: the power behind the Spitfire, Mosquito and Lancaster: the story of the engine that won the battle of Britain and WWII, (HarperCollins, 2020), was timed to mark the eightieth anniversary of the start of the Battle of Britain. He told the story of the Rolls Royce Merlin engine that powered all the most iconic planes of the war and probably prevented Hitler from invading. Greenwood commented in The Spectator, ‘Hoyland marries the drama and excitement with a clear focus on the technical: he puts you in the cockpit and into the very guts of the machines.’

Hoyland has written for The Times, The Mail on Sunday and The Independent. He has lectured on Mount Everest and his books at a variety of venues, including the Smithsonian, the Alpine Club, the Royal Geographical Society and the Duke of Edinburgh’s Gold Award Ceremony at St James’ Palace.

Hoyland, G. (2010, August 27). Mystery at the top of the world – Viewspaper Did George Mallory make it to the summit of Everest before he died? Graham Hoyland argues that he couldn’t have – due to a deadly combination of bad weather and worse luck. Independent. Retrieved December 7 2020 from https://infoweb-newsbank-com.ezproxy.uwtsd.ac.uk/resources/doc/nb/news/131DDD8D30201180?p=UKNB

Hoyland, G. (2002, February 23). High places: climb every mountain, sail every sea – there’s nothing mountaineers like more than absurd challenges, says Graham Hoyland. So he has risen to the occasion and devised a conquest to put them in seventh heaven. Independent. Retrieved December 7 2020 from https://infoweb-newsbank-com.ezproxy.uwtsd.ac.uk/resources/doc/nb/news/132A8F901AD264E0?p=UKNB

Morrison, R. (2018, May 26). The hairy hoax in the Himalayas – our willingness to believe that the yeti exists is a perfect example of human gullibility says Richard Morrison. Book of the week. The Times. Retrieved December 7 2020 from https://infoweb-newsbank-com.ezproxy.uwtsd.ac.uk/resources/doc/nb/news/16C28FEABB1C5AD0?p=UKNB