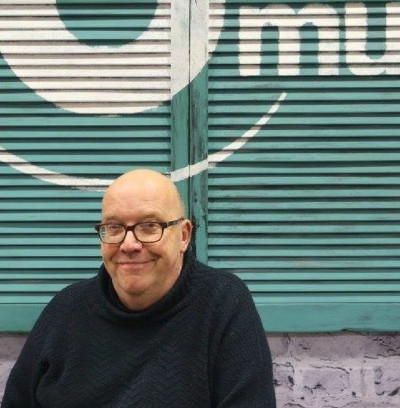 Ian Marchant is a writer, broadcaster and performer.

He grew up in Newhaven on the East Sussex coast, where he attended a comprehensive school. His father worked on the docks and his mother in a supermarket. He was the only person in his year at school to go straight on to university, without a gap period. In 1976 he entered St David’s University College to study philosophy; it was as far away from the south-east as he could manage! He has since said he was looking for a place that was more real than the south. He describes the area around Lampeter at that time as the wild west, a centre of hippie culture. This was the era of the emergence of punk rock and Marchant sang in the first punk band in mid-Wales, The Repeaters. He also occasionally attended chapel, sometimes to support friends who were ordinands. However, as he had gone to university to get away from home and to enjoy himself, he did very little academic work. He recalls a professor calling him into his office and telling him ‘Mr Marchant, you’ve been with us almost three years, yet we have no record of any written work from you.’ Ian left Lampeter without a degree! Ten years later, he returned to education, to study the History of Science with a minor in Creative Writing, at Lancaster University. This time, motivated by interest in the subject, he succeeded! He did eventually achieve a qualification from Lampeter, a ‘Certificate of Post-graduate Education,’ (with a distinction!)

In his youth, Marchant did an assorted variety of jobs. He worked as a bookmaker’s cashier, as well as selling second-hand records and smokers’ accessories on Llandrindod Wells market. By the end of the 1990s, he was living in a caravan on allotments in Lancaster, writing a novel. However, his first novel, In Southern Waters, was published by Victor Gollancz in 1999. Writing in The Times, Teeman described it as a story of love, life and outrageous misadventure among a bunch of Brighton hippies. For him, it was ‘one of those curios that deserves to become a cult.’ Marchant’s second novel was The Battle for Dole Acre (Weidenfeld & Nicolson, 2001). In it, TV chef Terry Whittaker is drawn into a fight to save the local donkey sanctuary from becoming a car park.

Deciding that reality is more unpredictable than made-up things, Marchant started to write non-fiction. Parallel Lines was published by Bloomsbury in 2003; Marchant describes it as a book about railways that has re-invented contemporary train spotting. The two parallel lines are the romantic railways of enthusiasts’ dreams, and then the real failing network of leaves on the line and the wrong kind of snow. Marchant travelled around Britain on all kinds of trains, from narrow-gauge steam railways to overcrowded commuter trains and the London Underground. He combined his railway odyssey with family memoir and social history. Nicholas Lezard’s review in The Guardian described the book as a little classic.

Then, in 2004, Marchant and an accompanying photographer, embarked on a month-long pub crawl, starting at The Turk’s Head on St Agnes in Scilly and finishing at The Baltasound Hotel in Shetland. His companion was a friend from Lampeter days, Perry Venus aka Paul Williams, the bass player in the Repeaters. En route they visited as many as possible of Britain’s 60 000 hostelries. Marchant described his journey in The Longest Crawl, (Bloomsbury, 2007). Lezard commented, ‘So he has a way of telling a story, a pleasing tone, and a way of shoving in a lot of information – and philosophy, too, at one point – without a trace of lecturing.’ Simon Armitage called it ‘drunkenly funny, obsessively factual, soberingly poignant.’ The Longest Crawl achieved the unusual double of being book of the month for September 2007 in both The Sunday Sport and The Church of England Newspaper.

Something of the Night, (Simon & Schuster, 2013), is another semi-autobiographical book, this time exploring Britain’s night-time activities. Marchant wrote about bonfires and fireworks, life at motorway service stations, and drunken nights out. He interviewed shiftworkers, night garage attendants and observers at asteroid lookout points. The book is scattered with details about sleep, dreams and circadian rhythms. As ever, Marchant also wrote about his own past, including his student years in Lampeter.

Later Marchant was shocked to discover that many undergraduates were alarmingly ignorant of large parts of recent British cultural history. He tried to rectify this with A Hero for High Times: a Younger Reader’s Guide to the Beats, Hippies, Freaks, Punks, Ravers, New-Age Travellers and Dog-on-a-Rope Brew Crew Crusties of the British Isles, 1956-1994, (Vintage, 2018). The story of British counterculture is told through the prism of Marchant’s friend Bob Rowberry, who lives in an old school bus in a wood in Wales. Marchant writes the story of the hippies for those too young to have been there. Writing in The Times, Roger Lewis described the book as ‘a masterpiece for oddballs.’

Marchant has presented a variety of programmes for Radio Three and Radio Four; the subjects range from a history of barbed wire to how to take an alpaca for a walk. In between come living off grid, hair loss and the disappearance of the Sussex iron industry. He has written for most of the quality press and is a regular diarist for the Church Times.

Between 2002 and 2006, Marchant was co-centre director for the Arvon Foundation, a charity that encourages creative writing, based at Totleigh Barton in north Devon. He now teaches creative writing at Birmingham City University. He performs stand-up comedy as the elderly Bohemian poet, Lionel Spume FRSL. For many years, he also played with his friend Chas Ambler in the semi-legendary band, Your Dad. He lives in Presteigne, near the boundary between England and Wales, saying ‘I’m a Radnorshire man, even though I’m from Surrey … Borders are where writers should be.’

Marchant, I. (2018, April 13). A late arrival to the Church of England. Church Times. Retrieved from https://www.churchtimes.co.uk/articles/2018/13-april/faith/faith-features/a-late-arrival-to-the-church-of-england

Lezard, N. (2007, July 7). The Guardian: Review: Nicholas Lezards paperback choice: Round Britain with a pint. The Guardian.  Retrieved from https://infoweb.newsbank.com/resources/doc/nb/news/11A4070ED5A365F0?p=UKNB

Lewis, R. (2018, February 10). When the kids were all revolting - This mad, sweary history celebrates the lost counter-culture of Britain, says Roger Lewis. The Times. p. 13. Retrieved from https://infoweb.newsbank.com/resources/doc/nb/news/16A0816037D55D90?p=UKNB