Andrew ‘Tim’ Timothy (1912-1990) was the original announcer of The Goon Show, before becoming a BBC newsreader and then assistant head of presentation.

Timothy was the oldest son of the Reverend Thomas Evans Timothy and his wife Alice Spencer, née Comber. He was born in Marylebone and christened Thomas Eifion Andrew Comber. However, while he was still a small child, the family moved to Merionethshire in North Wales. After public school, Timothy was educated at King’s College London and then St David’s College, Lampeter. He followed his father into the priesthood, working as a curate in Hoxton, north London, and as an army chaplain, reaching France with the Parachute Regiment on D Day plus one.

Timothy married Gwladys Marian Hailstone in Kensington in 1939. Their son Christopher, later to star as James Herriott in the TV series All Creatures Great and Small, was born the next year. However, the marriage quickly ended in divorce, meaning that Timothy had to find work outside the church. He worked for the Rank Organisation, before auditioning for the BBC in 1948. He was employed as a temporary announcer, joining the permanent staff three months later. Listeners soon grew used to his voice on the Light Programme and the Home Service.

Timothy became the original announcer of The Goon Show, the BBC’s iconic and surreal radio comedy series starring Peter Sellers, Harry Secombe, Spike Milligan and Michael Bentine. Timothy was announcer and warm-up man from 1951 to 1953, (series 1 to 3, plus episodes 1 to 5 of series 4). He left, saying he feared for his sanity; his replacement was Wallace ‘Bill’ Greenslade, who stayed with the show until it came to an end in 1960. The members of the Goons commented that ‘Our Tim is the best talking monocle in the business.’ In 1972, after Greenslade’s death, Timothy returned to take part in The Last Goon Show of all, celebrating the fiftieth anniversary of the BBC. The show was broadcast from the Camden Theatre, with Prince Philip and Princess Anne in the audience. 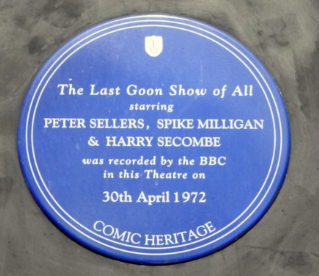 In complete contrast, Timothy became a news reader; his performance there was measured, authoritative and free of false emphasis and dubious pronunciation. He was made assistant head of presentation in 1959; he remained in this role until he retired in 1973. Brian Matthew remembered him as a warm and friendly man, but also as a real professional who demanded high standards.

In 1979, The Listener included an article by Timothy’s former colleague, Alvar Quan Lidell, lamenting deteriorating standards of speech at the BBC. Timothy was one of three people appointed by the corporation to monitor the service’s output for a month; the other experts were Robert Burchfield, chief editor of the Oxford English Dictionaries, and Professor Denis Donoghue, Professor of Modern English and American literature at University College Dublin. Timothy felt that although the standard of the BBC’s spoken English occasionally fell short, ‘the good often passes unnoticed, and comment and complaints pour in about the not so good.’ He was most concerned about non-British proper nouns, with difficult names sometimes being pronounced several ways in one bulletin. He said of Ayatollah Khomeini, ‘I have heard at least four versions of this, two in one news story. If we are going to mispronounce the name, let us at least be consistent.’ In response, BBC executives agreed to ask its staff to make more use of the Pronunciation Unit.

Like many announcers, Timothy did a great deal of work for the Royal National Institute for the Blind; after his retirement he continued to read for them.  He was married three times. Following the failure of his first marriage, his second wife was Florence Watkins (1915-1990). In 1970 he married Brigid Stevens, who outlived him. Timothy died in a nursing home in Horsham on December 9 1990.