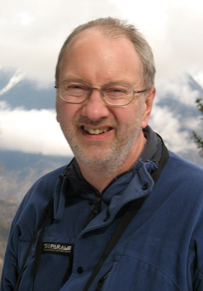 Richard Else is a writer, photographer, television producer and academic; in particular, he is a leading remote location filmmaker.

Else was educated in Leicester; his first job was recycling tapes at BBC Radio Leicester.  He studied English at St David’s University College, Lampeter. After graduating, he worked in local radio and TV in Cardiff, before moving to Newcastle upon Tyne to work in TV features.

In 1982, Else started work on a documentary about the notoriously reclusive Lakeland fell walker and writer, Alfred Wainwright. As Wainwright had repeatedly refused to appear on television, the programme would examine his books and contain interviews with his friends. However, surprisingly Wainwright told his publisher, ‘It sounds like an obituary. I think I ought to take part.’ The first time A.W. met Else, he told him ‘I think you’ve got a scoop, young man.’ Wainwright appeared for seven minutes at the end. The programme was well received; a couple of years later, Else persuaded Wainwright to participate in a series ‘Wainwright’s Lakeland & England’s North Country.’  Wainwright would act as a guide to the fells, staying as true to his books as possible. (As he did not want to be pestered by people who suddenly recognized him, only two of the programmes were actually set in the Lake District.) The presenter working with A.W. was Eric Robson, an experienced broadcaster but also a Cumbrian sheep farmer. Wainwright was reluctant to talk and preferred the camera to be on the Fells rather than on himself. Still, he became an unlikely star. Some of the programmes were popular enough to enter BBC 2’s top twenty for the week they were broadcast. Else thinks ‘We found a silent majority, we appealed to viewers who like slow, thoughtful people.’ He made two more series with Wainwright, Wainwright’s Coast to Coast Walk and Wainwright in Scotland. Else later described the ten years and 5000 miles he spent with Wainwright in his book Wainwright Revealed, (Mountain Media, 2017).

Deciding he wanted to concentrate on extreme adventure programmes, Else followed this up with The Climbers. Chris Bonington presented a series of programmes about the development of modern mountaineering. It was also while filming Bonington’s attempt on Mount Elbrus, Europe’s highest mountain, that Else met his future collaborator, Cameron McNeish.

In 1994, Else made The Edge, a series on the history of Scottish mountaineering. The schedule was tight; they had only four months to film and deliver six programmes. Else comments ‘It was tricky to arrange, tricky to film, and we had very little time to capture the action.’ McNeish, who presented the series, remembers that almost everyone in the crew was a climber. He comments that they worked incredibly long hours in difficult conditions to get the right climbing action. They were also sensitive to the needs of other mountain users. The series featured the most stunning action footage of Scottish climbing that had ever been taken. The second episode, featuring W.H. Murray and the years before the Second World War, won a Scottish BAFTA.

Following on from this, Else worked with McNeish again on Wilderness Walks. In each episode, McNeish combined a hike with an interview with a public figure. Chris Brasher, the co-founder of the London Marathon, climbed Ben Macdhui in the Cairngorms with him, and Donnie Munro, the former lead singer of Runrig, ascended the Red Cuillins of Skye. In one programme, the American explorer, Matty McNair, undertook a 90 mile journey by dog sled through Baffin Island in winter. Allowing for the wind chill, the temperatures were as low as minus one hundred degrees Celsius. After this, he moved to new lightweight cameras and home office editing. This produced significant savings in time and money. Else commented that his company Triple Echo did projects that were seen around the world, and were right at the forefront of technology, but were based at his own house.

In 2008, Else started producing The Adventure Show; he became executive producer in 2011. The programme, going out monthly, has gradually grown into an integral part of BBC Scotland’s prime time schedule. It describes itself as a visually stunning series built around Scotland’s thriving adventure sport scene – from mountain biking and kayaking, to adventure racing, surfing and mountain marathons.  Many episodes have featured one of the presenters taking part in a race of some kind; indeed, in 2012, Deziree Wilson was third in the women’s section of the Goat Fell Hill Race on the Isle of Arran. The Adventure Show has been accompanied by a number of ‘specials.’ The Great Climb, broadcast in 2010, showed climbers Dave MacLeod and Tim Emmett successfully ascending Sron Ulladale, a magnificent overhanging cliff in a remote part of Harris. This is said to be one of the toughest rock faces in the world, as well as the finest inland precipice in Britain. Although the climb and therefore the broadcast lasted five and a half hours, it got astronomically high viewing figures; some climbers considered it the best programme ever made about the sport. Dave MacLeod wrote, ‘If you watched the program, you saw some of the problems we dealt with as climbers to get to the top – a painful ankle and wet rock. But you won’t have seen all the equally hard work, good judgement calls and quick thinking that made it all happen behind the camera.’ Else commented ‘The Great Climb is arguably the most complex programme ever mounted by BBC Scotland.’ It won a Scottish BAFTA for live event programme.

Else has combined broadcasting with a career in academia. He was the inaugural Head of Media at both Sheffield Hallam and Teesside Universities; as well as devising undergraduate and postgraduate courses, he secured considerable external investment. He is currently a Professorial Fellow at St Chad’s College, Durham University. He is particularly interested in the relationship between the media and social justice and inclusion. Else has undertaken research and professional practice for a wide variety of clients; recent projects have received funding from the Big Lottery, Media Box, the Churches’ Regional Commission and the Joseph Rowntree Foundation. He has also worked closely with the Fairtrade charity Traidcraft, documenting their work in many countries.

Else has won over thirty major awards worldwide; as well as the two Scottish BAFTAs, he has been honoured by the Royal Television Society and by film festivals in Canada, the United States, Japan and mainland Europe. He was the second winner of the Scottish Award for Excellence in Mountain Culture. He is one of the few Europeans to feature in the National Geographic’s Voices from the Summit. He has written eight books on the outdoors, including The Sutherland Trail (Mountain Media, 2009), The Skye Trail (Mountain Media, 2010), and Scotland End to End (Mountain Media, 2012), (all written with Cameron McNeish).

Else has lived in the shadow of the Cairngorms for the last twenty years. For the past twenty-five years, he has worked alongside his wife, Margaret Wicks, another Lampeter graduate.

Wells, C. (n.d.) And now for something Else. Retrieved January 27 2021 from http://www.scottishoutdoors.co.uk/outdoors/template_files/triple_echo.cfm.htm