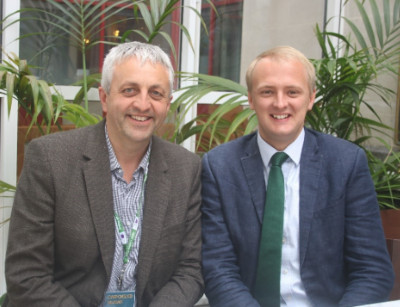 Richard ‘Dick’ Cole is leader of the Cornish national party Mebyon Kernow and one of Britain’s longest serving political leaders.

Cole is thoroughly Cornish. His family have lived around the parish of St Enoder, a few miles south east of Newquay, for generations. His great, great grandfather John Cole was the first clerk of St Enoder in the late 1800s. Dick Cole spent his childhood just outside the village of Indian Queens. He attended Indian Queens Primary School and then Newquay Treviglas School. Between 1983 and 1988, he worked as a farm labourer and gardener near the village of Summercourt. However, he also passed three A-levels, studying by correspondence course.

Cole read archaeology and history at St David’s University College, Lampeter, from 1988 until 1991. After graduating, he stayed in Lampeter for three more years, doing postgraduate research and some teaching. At university, Cole was involved in Plaid Cymru; he was the secretary of the university branch for a couple of years and took part in his first political debates. It was also at Lampeter that Cole met his wife Ann Reynolds, another archaeologist; they married in St Enoder Church in 1999.

Cole went back home to Cornwall in 1994, joining Cornwall County Council’s archaeological unit. He produced over 80 reports. The projects he was involved in included excavations at St Piran’s church, Perranzabuloe, which had been engulfed by sand dunes; the Romano-Cornish enclose at Killigrew, near Trispen and the Glasney College at Penryn.

Cole joined Mebyon Kernow, the Party for Cornwall, in 1988; he became their Press and Campaigns Officer four years later. He was elected party leader in 1997. Mebyon Kernow was founded in 1951 at the Oates temperance hotel in Redruth. Its original aims included to ‘study local conditions and attempt to remedy any that may be prejudicial to the best interest of Cornwall,’ to ‘foster the Cornish language and literature,’ and ‘by self-knowledge to further the acceptance of the idea of the Celtic character of Cornwall, one of the six Celtic nations.’ The party campaigns for a Cornish assembly with legislative powers, as part of a rebalancing of democracy within the United Kingdom.

In 1999, Cole was elected as a member of the borough council of Restormel, representing his home parish of St Enoder.  The next year he produced the Declaration for a Cornish Assembly; this called for a devolved Cornish assembly and a referendum on self-government. Although it was signed by more than 50 000 people, over 10% of the Cornish electorate, the petition was disregarded by Tony Blair’s government. Cole commented, ‘They ignored us. That has been the real sadness of the last 20 years … Central government just doesn’t get Cornwall in the way it gets Wales and Scotland … Partly it’s a matter of geography – it’s a long way from London and Conservative MPs seem to see Cornwall as a good place to go on holiday but don’t understand the detail of the place.’

Cole kept his seat on Restormel Borough Council until it was abolished and a new unitary authority, Cornwall Council, was formed. Employees of a local authority are not permitted to be elected members of it; he was forced to choose between his profession as an archaeologist and his involvement in Cornish politics. He resigned from Cornwall Archaeological Unit, but was elected councillor for the St Enoder division, achieving a remarkable 78% of the vote. He was re-elected in 2013 and 2017; in 2017 his majority of 947 was the largest of any candidate in Cornwall.

In 2014 the Cornish were declared a national minority under the European framework convention for the protection of national minorities. Thus, they joined the Welsh, Scottish and Irish as official members of Britain’s Celtic fringe. Cole has campaigned for ‘Cornish’ to be listed as a distinct nationality in the UK census forms, with its own tick-box. In the 2011 census, 73 000 people or 14 % of its population described themselves as Cornish. Over a long period, Cole has campaigned vociferously against changes to parliamentary constituencies leading to the possible creation of a ‘Devonwall’ seat, including land in Devon as well as Cornwall. He has written, ‘Cornwall is a historic nation with its own culture, traditions and language, while the Cornish are recognised as a national minority … I submitted evidence to the Public Bills Committee and formally requested that MPs ensure the Cornish border, which has been in existence for more than one thousand years, is respected in all future boundary reviews and Cornwall’s territoriality is not breached.’

Cole was one of the three co-authors of Mebyon Kernow and Cornish nationalism, (Welsh Academic Press, 2003), the first academic study of Mebyon Kernow and its place in the wider Cornish movement. Cooper describes it as an important text for anyone interested in the history of the modern British state and of historic European nations. Furthermore, he comments that the close link between the book’s authors and the politics they describe is one of the volume’s greatest strengths.

In 2018, Cole and his wife Ann Reynolds produced a book about the seventy-three men from their local area who died in the First World War. Entitled Trusting fully trusting. Remembering the men of Fraddon, Indian Queens, St Columb Road and Summercourt who lost their lives in the First World War, it won Gorseth Kernow’s Holyer an Gof Cup (for the best non-fiction Cornish book published in 2018). Also, in 2018, Cole was made a bard of Gorsedh Kernow, with the bardic name Gwythyas an Tir, (Guardian of the Land). This was in recognition of his campaigning work to protect the geographical and cultural integrity of Cornwall.

Cole has a reputation, even amongst his opponents, as a tireless campaigner for local issues and as a champion of the powerless. He has been involved in a wide range of campaigns related to housing and planning, including pushing for a more sustainable housing target and a stronger focus on providing genuinely affordable homes for local residents. He has fought for fair funding for public services such as hospitals and schools and for greater protection of the environment. He has been personally responsible for more than 40 successful applications for funding on behalf of groups in his home parish of St Enoder, raising over £600 000. His colleague Loveday Jenkin has said of him, ‘Dick’s long-standing commitment to Cornwall and its people is extraordinary. He has been at the heart of so many campaigns and it is truly remarkable that he has found so much energy to battle for Cornish communities over such a significant period of time.’