Helen Wynne Thomas (16 August 1966 to 5 August 1989) is remembered as the Greenham Common martyr. Hers was the one death that occurred there as a result of the peace protests.

Greenham Common, in Berkshire, was the site of a US airbase; at the height of the Cold War, NATO planned to install 96 ground-launched cruise missiles there. Each of these missiles would have sixteen times the power of the bomb that destroyed Hiroshima. In the late summer of 1981, the Welsh group ‘Women for life on earth’ marched from Cardiff to Greenham Common to protest.  They set up the Women’s Peace Camp there; as the protest grew, other camps were established around the perimeter fence. There tens of thousands of women were to protest against war and nuclear weapons. The women lived in very basic conditions and under constant harassment and the ongoing threat of eviction. They organized ongoing peaceful protests, ranging from decorating and cutting the perimeter fence to blockading the roads.

Helen travelled to India for six weeks, where she met Mother Theresa. After she came back, she spent time working for Cardiff Women’s Aid and various other charities. She also joined the Campaign for Nuclear Disarmament. At the beginning of 1989, she moved to the Yellow Gate camp at Greenham Common. Her mother said, ‘They had been short of women at that time and she wanted to get involved,’ and ‘She wrote back to us and would tell us what an incredible inspiration the women were and how she really wanted to give her time to peace.’  A keen Welsh speaker and campaigner, Helen translated a Greenham publicity pamphlet into Welsh and inspired several of her fellow protestors to investigate Welsh nationalist politics.

Helen was killed in a road accident at the camp on Saturday 5 August 1989. She was hit by the wing mirror of a passing West Midlands police horsebox, while she stood on the safe zone, waiting to cross a road to post two letters. The horsebox was taking four horses to a charity display in Chichester. The inquest at Newbury Magistrates Court determined that the death was accidental. Although Helen’s family felt her death was not properly investigated, they were unable to get the inquest re-opened. 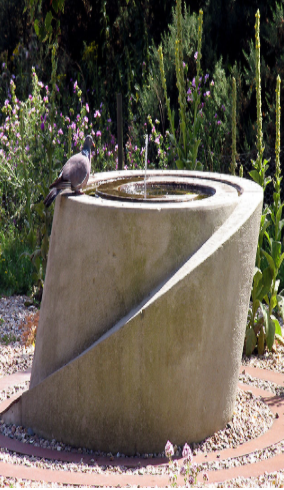 As the Cold War came to an end, the missiles and American military personnel were returned to the United States between 1990 and 1992. The Women’s Peace Camp closed on 5 September 2000.  A peace garden there was opened to the public two years later. It includes a simple garden for Helen, the only woman mentioned in the site. Her garden features a circle of seven stones, brought from Welsh quarries, around an eternal flame sculpture. There is also a bench dedicated to Helen’s memory, by the town clock in her home town of Newcastle Emlyn; the folk singer, Dafydd Iwan has written a song, entitled Cân i Helen, in her memory.