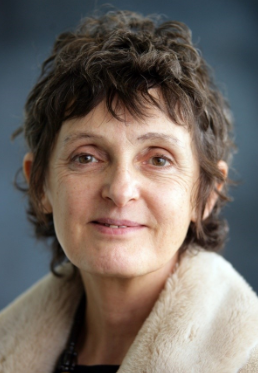 Sue Slipman was the first woman president of the National Union of Students. Since then, she has become a veteran campaigner, working in a wide variety of public sector roles.

Slipman was the grandchild of Jewish immigrants from Russia. She has commented, ‘The Holocaust was very close to my family. … There were plenty of members of the family who didn’t make it out. So that sense of terrible injustice was part of what I grew up with.’ Slipman and her two elder sisters grew up in Brixton, South London. Her father was variously a merchant seaman, an ice-cream salesman and a cabbie, as well as running a kosher pie- and- mash shop. Sadly, both Slipman’s parents died when she was in her early twenties.

In complete contrast to Brixton, Slipman studied English at St David’s College, Lampeter. While at Lampeter she joined the Communist Party. However, she had little opportunity to be involved in student politics. She has said ‘There wasn’t much student politics in Lampeter; once you’d given out a hundred leaflets, there were only sheep to give them to.’ She graduated with a first-class degree and then moved to the University of Leeds for postgraduate study. She has said of her time in Leeds, ‘It was meant to be on eighteenth century literature but it actually turned out to be about student poverty.’ She worked as full-time secretary of the National Union of Students for two years and then served as its president from 1977 to 1978, representing the Broad Left.  Nicknamed ‘Red Sue’, she gained endless media attention. However, even in those days, she was more interested in making things work than in political chat. Her priority was to run a large organization that negotiated with the government and with vice chancellors. She has said ‘I was learning to chair conferences of 2 000 people, about a third of whom were baying for your blood. So you got used to the real rough and tumble of how to manage difficult situations, of negotiating with ministers, of a lot of media exposure.’ Slipman was succeeded by Trevor Phillips; the first woman NUS president was followed by the first black president.

On leaving the NUS, Slipman started work as a negotiator for the militant National Union of Public Employees, (now part of UNISON). Despite clashing with the hierarchy, she managed to stay at NUPE from 1979 to 1985.  However, in 1981 she became a founder member of David Owen’s newly formed Social Democratic Party. She has commented ‘The SDP was about thinking through effective strategies to improve social justice in a way that was economically viable.’ When the SDP and the old Liberal Party merged in 1990, she was one of the few to remain with David Owen in the ‘continuing’ SDP.

In 1985, Slipman became director of the National Council for One Parent Families. She transformed an old-style pressure group, said to be more interested in campaigning than in results, into a slick and influential organization with an annual turnover of over a million pounds. Slipman introduced targets and a business plan. The NCOPF was instrumental in pushing through the Family Law Reform Act, which removed the stigma of illegitimacy, and in getting childcare allowance for those on family credit. She also led the resistance to John Major’s government’s repeated attempts to stigmatize single parents. Yet, Slipman was also able to negotiate a big contract with the same government for the NCOPF to run training schemes to help unemployed women re-enter the labour market. She has said of her work ‘Too much of the voluntary sector still approaches issues as if the answer to everything were a change of government. You have to take a long-term view, and look to the incremental changes that can be made.’

While at the NCOPF, Slipman herself became part of a one-parent family. Her son Gideon was born in 1987.

Slipman was director of the Gas Consumers Council from 1996 to 1998 and then became External Relations and Compliance Director for the Camelot Group, the operator of the National Lottery. She set up a social and ethical audit of the company to test its commitment to good works; she also formed a panel of experts to advise on social responsibility. She commented ‘With a government that is never going to tax and spend, you have to look at how you raise the maximum amount of money in order to do good things.’ She also said of this role ‘… my obsession throughout my career has been holding organisations to account, asking how you can marry commercial values of enterprise and industry with social responsibility.’

Alongside her role at Camelot, Slipman was non-executive chairman of the Financial Ombudsman Service for two years from 2003 to 2005. It is the responsibility of the ombudsman to resolve disputes between consumers and financial services companies. On average, it deals with 55 000 cases a year. Slipman went on to work for the Foundation Trust Network representing foundation trust hospitals, (now known as NHS Providers), first as director and then as chief executive. At that time, she was delighted to get aboard ‘the rollercoaster of system change in health,’ seeing her role as another chance to explore how economic efficiency could be united with new forms of democratic accountability.

Slipman left the Foundation Trust Network in 2012. Since then, she has been non-executive director of Kings College Hospital Foundation Trust. She was a trustee of the National Employment Savings Trust from 2010 to 2015.

Slipman has been described as a down-to-earth dynamo with an irreverent sense of humour.  She is a pragmatist, feeling her style is ‘knowing the art of the possible and trying to work with the grain.’ She was awarded an OBE in 1994.

Brindle, D. (1999, Apr 28). The Guardian: At arm's length: finance: If charities get too chummy with government, is there a danger of losing independence? David Brindle listens to people in the field. The Guardian. Retrieved from https://infoweb.newsbank.com/resources/doc/nb/news/0F26DB97EB5FD8F7?p=UKNB

Doward, J. (1999, Feb 21). The Observer: Business: Still a crusader after all these years: Mammon: Sue Slipman was a union radical. Now she's been drafted by the Lottery. She reckons she can be radical again. The Observer. Retrieved from https://infoweb.newsbank.com/resources/doc/nb/news/0F26D755C1F01849?p=UKNB

Bedell, G. (1994, Apr 3). Profile: A militant moderate: Sue Slipman: The champion of the single parent is in need of a new challenge, says Geraldine Bedell. The Independent on Sunday. p. 019.. Retrieved from https://infoweb.newsbank.com/resources/doc/nb/news/131FE8CFE0DA7A08?p=UKNB