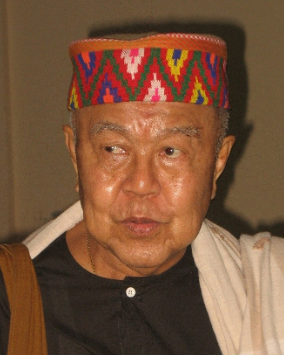 Sulak Sivaraksa is a Buddhist intellectual and social activist, who has twice been nominated for the Nobel Peace Prize.

Sulak was born into a prosperous and aristocratic family in Bangkok in 1933; his father was an accountant for the British-American Tobacco Monopoly. Towards the end of World War Two, Sulak spent two years as a novice monk in a Buddhist monastery. After this, he completed his secondary education at Assumption College, a Catholic school in Bangkok.

On leaving school, Sulak moved to Britain to study at St David’s College Lampeter. He was one of very few foreign students; in October 1959, only nine of the 189 students at Lampeter were from overseas. Sulak has since commented, ‘Once, in Carmarthen, two ladies saw me. One said to the other: ‘Black man!’ I turned to her and said, ‘Not quite, madam.’ He took a full part in college life, even including regularly attending chapel. College life at that time was characterized by lectures and tutorials in gowns, as well as daily formal dinners with a Latin grace. Following his time in Wales, Sulak moved to London to study law, becoming a barrister-at-law in 1961.

Sulak returned to Thailand in the 1960s to be a lecturer at the Thammasat and Chulalongkorn Universities. At this time he was still a defender of the Thai monarchy. In 1963, he founded and edited Social Science Review, a major forum for critical reflections on Thai society.  While he was editor, Sulak met the progressive Thai Prince Sitthiporn. The Prince challenged him by asking, ‘Do you know anything about farmers? They suffer and you know nothing about it!’ Sulak began to visit villages, temples and rice fields, so he could understand what people’s living conditions were. He realized that to address a situation of suffering it was necessary to go and be with the suffering. Sulak was gradually transformed into a grassroots campaigner for social justice.

Sulak is credited with starting Thailand’s indigenous NGO movement. He launched large numbers of foundations, charities and activist groups. These included the Komol Keemthong foundation, the Pridi Banomyong Institute, the Slum Childcare foundation and the Coordinating Group for Religion and Society. In addition, he opened Suksit Siam, the first alternative bookshop in Thailand and a hub for social discussions and activism. Not surprisingly, Sulak’s activities brought him into conflict with the authorities. A coup happened in Thailand in 1976, while Sulak was visiting Britain. He says, ‘I was in London and found out from the newspaper that I had been arrested in absentia. They burnt all my books. They would have burnt me alive too, so, like a brave man, I stayed away.’ Sulak spent the next two years outside Thailand, working as a visiting professor at the University of California Berkeley, Cornell University and the University of Toronto.

In 1984, Sulak was arrested and accused of criticizing the king in his book Unmasking Thai Society and in interviews; he was released following international protests. Then, in 1991, he gave a speech at Thammasat University, entitled ‘The regression of democracy in Siam.’ Following this, a warrant was issued for his arrest and he was forced to take refuge inside the German embassy. Eventually, he was able to flee to Laos and eventually reached Stockholm. After returning to fight the charges against him, he won his case in 1995.

Sulak’s activism is founded on Buddhist teachings. He believes that ‘Buddhist practice inevitably entails a concern with social and political matters … To attempt to understand Buddhism apart from its social dimension is mistaken.’ In his most widely read book, Seeds of Peace (International Network of Engaged Buddhists, 1992), he developed what he called small “b” Buddhism. People should develop their character based upon the Buddha’s teachings of mindfulness, tolerance and interconnectedness. Sulak also reinterpreted the classic five precepts, taking them beyond individuals to society at large. For instance, the first precept forbids the taking of life; Sulak challenged his readers to examine how their actions might support wars, racial conflict or the breeding of animals for human consumption. He rejects western concepts of development in favour of an approach growing out of indigenous culture. Indeed, he has said that  ‘globalisation is a demonic religion imposing materialistic values’ and ‘a new form of colonialism.’ In 1989, Sulak was one of the founders of the International Network of Engaged Buddhists.

Sulak was nominated for the Nobel Peace Prize in 1993 and 1994. In 1995, he was awarded the Right Livelihood Award, (dubbed the Alternative Nobel Prize), for his ‘vision, activism and spiritual commitment in the quest for a development process that is rooted in democracy, justice and cultural integrity.’ He became an Honorary Fellow of the University of Wales Lampeter in 1996 and was awarded the Niwano Peace Prize in 2011.  He has written over one hundred books in Thai and English.

Byrnes, S. (2011, May 8). Breathe in, breathe out, and drop the coke – ArtsBuddhist economist Sulak Sivaraksa has advice for Western capitalist societies. Sholto Byrne slows down and listens. Independent on Sunday. Retrieved May 29 2021 from https://infoweb-newsbank-com.ezproxy.uwtsd.ac.uk/apps/news/document-view?p=UKNB&docref=news/13719489D4DF2B90.