Alexander Goldwyer Lewis (1849-1904) was a local man who became Archdeacon of Bombay.

Goldwyer Lewis was born in Llandilo, Carmarthenshire; his parents were Thomas and Marie Victorie Lewis. The 1851 census return lists his mother’s place of birth as Grenada. Thomas is described as a solicitor and high bailiff for Cardiganshire. After attending school in Brecon, Alexander entered St David’s College, Lampeter.  It was later said of him that he would have shone in any university. He became senior scholar, as well as winning the classical prize. He graduated in June 1871 with first-class honours in Classics. Despite his academic achievements, he also found time to be active on the sports field and as chairman of the debating society. (He later took his BD degree at Lampeter in 1884, while at home on furlough. He was also to become a fellow of the University of Bombay.)

Lewis was ordained deacon by the Bishop of St Asaph, Joshua Hughes, in 1872 and then priest in 1873. His first clerical post was as curate at Erbistock, a few miles south of Wrexham. After this, he worked as a curate in Oswestry from 1874 to 1875. Also in 1875, he married Annie Blaikie; the couple had a son and two daughters.

The next twenty-one years of Lewis’ life were spent in India. He went east as chaplain in the Bombay Ecclesiastical Establishment. (The East India Company’s charter had been renewed in 1813; this had included creating a diocese of Calcutta and an ecclesiastical framework. Following this, the dioceses of Madras and Bombay were established in the 1830s. St Thomas’, consecrated in 1718 and one of the oldest churches in India, became the Anglican cathedral of Bombay.)

Lewis became chaplain of Neemuch on 4 June 1875. Neemuch is in Madhya Pradesh, in central India, and situated on an upland plateau, 500 metres above sea level. Twenty-years before it had been a centre of disturbance during the Indian mutiny. 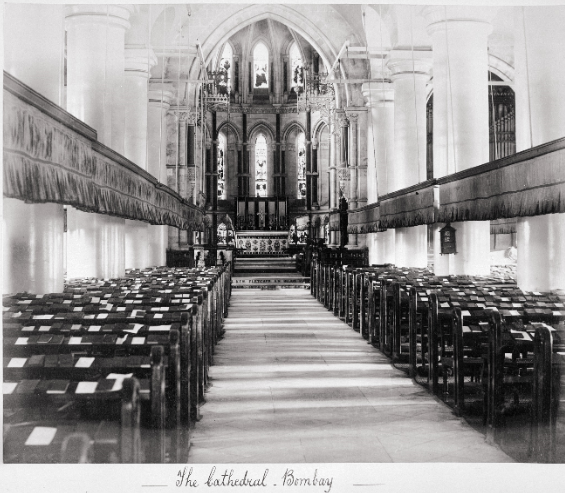 Lewis then became acting garrison chaplain at the presidency in April 1876. He also spent some time working in Quetta. Bishop Louis George Mylne made him acting archdeacon and Bishop’s commissary in 1888. He became Archdeacon of Bombay in 1890, serving in this role until 1896. In 1894 he was commissioner in charge of the diocese. At this time, Bombay (or Mumbai) was a major centre for import trade, particularly aided by the opening of the Suez Canal in 1869. The first Indian railway, from Bombay to Thana, had opened in 1853 and the first spinning and weaving mill was established in 1857. The city quickly became the centre of India’s cotton industry. However, as the population increased, so did poverty; overcrowded and insanitary conditions became more widespread.

During his time in India, Lewis wrote a pamphlet entitled The position and prospects of the Anglican branch of the Catholic church in India. In it, he expressed the hope for an Indian church, with its own ecclesiastical machinery and its own native leadership. In order to achieve this, he felt that ‘much must be done in a way very different from that which is unhappily the stereotyped method of missionary work.’ He also criticized the missionaries’ common policy of directing their efforts towards the members of the lower castes, making few efforts to convert those of higher rank. The booklet was published by A.R. Mowbray sometime in the 1880s. A copy is held in UWTSD’s special collections.

On his return home in 1896, Lewis became rector of Aldford, near Chester. He moved to the rectory of Davenham, near Northwich, in 1903. He represented former students at the seventy-fifth anniversary celebrations of St David’s College in 1902. He remained a keen supporter of missionary work and of the Society for the Propagation of the Gospel. He was described as a vigorous and eloquent preacher, and as a moderate high churchman, ‘but with views broadened and softened by wide experience of men and life generally.’

Lewis was not to live to old age. He died after a three months illness at the home of his sister-in-law, near Oswestry.

Ancestry. Retrieved 13 May 2020, from: https://www.ancestrylibraryedition.co.uk/