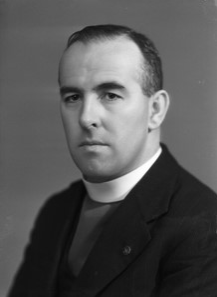 From Lampeter student to Bishop to the Diocese of Argentina, Eastern South America with the Falkland Islands.

Daniel Ivor Evans was born on 5th July 1900, the seventh child of David Hugh Evans and Mary Rowlands. His father was a cabinet maker and the family resided at 24 Bridge Street, Lampeter. Evans attended the College School and at the age of sixteen he joined the Royal Navy Volunteers Regiment. At the end of the war, he attended St David’s College graduating in 1922. He was ordained by Bishop Bevan in 1924, serving as curate at St. John-Juxta-Swansea. After three years he was transferred to St Martin’s, Roath under Chancellor Dr. Hopkins James;  he served there until 1930 when he journeyed to South America. For the next five years he worked as assistant chaplain to Archdeacon W. H. Hodges at St John the Baptist (Pro-Cathedral) in Buenos Aires.

During that time, Evans undertook a considerable number of additional duties. He was S.P.G. chaplain of Cordoba 1930-34, nominated Secretary to the Diocesan Synod and Standing Committee in 1931, appointed domestic chaplain to Bishop Every 1932-1937, Hon. Assistant Padre of Toc H. in 1932 and chaplain of Western and Central Provinces in 1935. Between 1936 and 1938 he was chaplain to the parishes of Hurlingham and Ville Devote and in 1936 was made an Honorary Canon of St John’s Pro-Cathedral. In 1938 Evans moved to Rio de Janeiro where he was rector of Christ Church for the next eight years.

In 1939 Evans briefly returned to Britain; on 24th February, St Matthias Day, he was consecrated Bishop at Westminster Abbey by the Archbishop of Canterbury. St David’s College proudly recorded this event in the School Magazine under the heading ‘Lampeter’s new Bishop’, ending the article with the promise that they would ‘not fail to remember him in our prayers, along with the many other Lampeter men working in the Church overseas’.1

In October of the same year, Evans assumed the duties of assistant to Bishop J. R. Weller and undertook an exhaustive pastoral visit to the missionary districts in the Argentines and Paraguayan Chaco, all the chaplaincies in Brazil, Argentina, Uruguay, the Falkland Islands and even to South Georgia. The map below provides an indication of the distances travelled by Evans, accompanied by Rev G.K. Lowe as they spent nearly a month travelling on horseback and by boat visiting farms and settlements.

In 1940 Evans married Leone Ernestine Helene Lefeure. In August that year he resumed his duties at Christ Church, also undertaking the superintendence of the northern Archdeaconry. This involved making periodic visits to the River Plate for confirmation services. Brazil’s participation in the Second World War, fighting alongside the allies, imposed new demands on him. He was commissioned to act for the American Episcopal Church ministering to United States troops in Brazil. He visited the troop ships and was involved with the Mission to Seamen.

In 1946 Evans succeeded Bishop Weller as Diocesan Bishop in Argentina and Eastern South America with the Falkland Islands (and Dean of Port Stanley). He was enthroned on 2nd August 1946 in St John’s Pro-Cathedral and on 3rd March 1947 in Christ Church Cathedral, Stanley. The scale of his diocese meant his role involved a considerable amount of travelling by sea, railway, aeroplane and horseback. In 1950 it was recorded that of the two hundred and seventy-five days occupied by visits outside the River Plate region, seventy were spent visiting the Falkland Islands.

However, Evans found time to contribute a chapter on St John the Baptist to The Apostle’s doctrine and fellowship: a symposium on the Christian year, the sacraments and services, some aspects of the outreach of the church, published in 1958. He acquired three languages besides his native Welsh and English, and gave frequent broadcasts to the Welsh colony in Patagonia. In 1952 Evans was awarded the CBE. He died in post at the relatively young age of sixty-two on 30th July 1962, on the journey home from the service of ordination of four priests.

Despite his many years in South America, Evans did not forget his hometown. The  university archives hold an illuminated address from the Mayor, Aldermen and Burgess of the borough of Lampeter on his elevation to the See of Argentina and Eastern South America, thanking him for his continual support and financial contributions to the town.