Noël Debroy Jones (1932-2009) was a larger than life character, who became Admiral of the Fleet and then bishop of Sodor and Man.

Jones was born on Christmas Day 1932 to Brinley and Gwendoline Jones. He was educated at Haberdashers’ School, Monmouth and then St David’s College, Lampeter.  After graduation, he studied for ordination at Wells Theological College.  He worked as a curate at St James’s, Tredegar and then St Mark’s, Newport.

His next move was to northern Nigeria; he became vicar of Kano, where he is said to have made a great impact in a short time. In an Islamic region, he was noted for his openness to some other Christian traditions. As he invariably wore a cassock, except when playing sports, he was an unmistakable figure.

In 1962, Jones was posted to Singapore and Brunei as a naval chaplain. This was a difficult period for the Inshore Flotilla of coastal minesweepers, as it became involved in the Brunei uprising, (against Brunei’s proposed inclusion in the state of Malaysia). Jones established a remarkable rapport with the sailors; it is reported that men berthed in minesweepers away from the one in which he was conducting the Sunday service would hire water taxis to hear him preach. In Singapore, he performed the first of his naval baptisms, using the upturned bell of HMS Puncheston as a font.

Next Jones served in the Royal Marines, where he worked in 42 Commando and was involved in the withdrawal from Aden. (He was proud of having passed the Royal Marines Commando Course!) Jones’s unit was the last to leave. Jones told a story of visiting a hospital expecting to find wounded men. Instead he encountered the enemy, recognizing them by their turbans and guns. He said that he immediately ‘turned and ran like a madman for a low wall, which I hopped over just in time’

In 1969, Jones married Joyce Leelavathy Aralanandam in Singapore. The couple had two children, Vanessa and Ben.

Jones spent three years as staff chaplain at the Ministry of Defence; then from 1977 to 1980 he was Senior Chaplain for the British forces in Hong Kong. In this role, he would visit every sailor’s family and introduce himself as ‘your vicar’. On one occasion some excitable Chinese workers engaged in building on the HMS Tamar site started to riot. Jones calmly disarmed the axe-wielding leader!

By the time the Falklands War broke out, Jones was back in Britain. He had the difficult task of breaking sad news to next of kin. He is said to have done this with great compassion and skill. He was appointed an honorary chaplain to Queen Elizabeth II in 1983 and Chaplain of the Fleet and Archdeacon of the Royal Navy in 1984. He assisted at the marriage of the Duke and Duchess of York at Westminster Abbey in 1986. 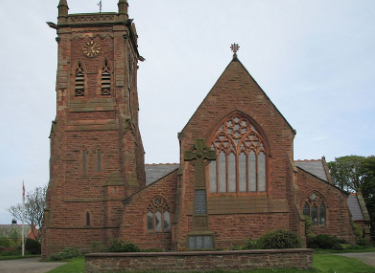 Picture: Peel Cathedral, Isle of Man, where Jones was bishop

In complete contrast, in 1989, Jones was appointed Bishop of Sodor and Man, (the Isle of Man and its adjacent islets). This is an unusual diocese; the bishop is a full voting member  of the island’s parliament, the Tynwald, but no right to a seat in the House of Lords.  At first the post was something of a culture shock, but Jones was soon able to engage with the whole community. In this small community, it was said that everyone knew the bishop, in his purple cassock at the airport and supermarket, as well as in church. He is remembered with affection as the ‘bishop in the pink dress.’  He was very active in local affairs and reputedly ran the diocese ‘like an aircraft-carrier!’

Jones was Anglo-Catholic in his churchmanship and a leading traditionalist in the debates about the future of the Church of England. He became a staunch opponent of women’s ordination. He would listen to the arguments, but always conclude by saying ‘I just have this gut feeling that it is wrong.’  He also opposed church remarriage for divorcees, saying he wanted to prevent couples committing perjury at the altar. He felt the person being remarried is effectively saying ‘I didn’t really mean it last time.’

After retirement, Jones became an assistant bishop of York, as well as assisting in local parishes and at All Saints’, York. He died from cancer at St Christopher’s Hospice, Scarborough, on 28 August 2009.

Obituary of the Right Reverend Noel Jones outspoken and conservative Bishop of Sodor and Man who went supermarket shopping in his purple pomp. (2009, September 11). Daily Telegraph. Retrieved from https://infoweb-newsbank-com.ezproxy.uwtsd.ac.uk/resources/doc/nb/news/12AACE63D3FC64E0?p=UKNB.