Timothy Rees was the first diocesan bishop in the disestablished Church of Wales with only a Lampeter degree.

Rees was a local man. He was born in Llanon on 15 August 1874. His parents were David and Catherine Rees of Llain Llanon. The family were Welsh-speaking and Rees spoke Welsh before he learned English. Indeed, in public speaking, he was always most at home in Welsh. Rees was educated at Ardwyn School, Aberystwyth and St David’s College School, Lampeter, before winning a scholarship to St David’s College. In Lampeter, he quickly made a mark in the Literary and Debating Society; it was said of him ‘It was felt that a Welsh speaker of the first rank had entered college that year.’ Rees graduated with a BA in 1896. After that, he trained for the ministry at St Michael’s College, Aberdare. He was ordained deacon in December 1897 and priest a year later. He was a curate at Mountain Ash from 1897 to 1901. He then went back to St Michael’s College, Aberdare, where he was chaplain from 1901 to 1906.

Rees’ next move was to the Community of the Resurrection, Mirfield, West Yorkshire, an Anglican monastic community. He made his profession as a monk in 1907. He became increasingly well known as an evangelistic preacher, in Britain and overseas. He conducted missions in New Zealand, Canada and Sri Lanka.

In 1915, Rees was one of eighteen Mirfield fathers to become army chaplains. He served on a Gallipoli hospital ship, in Egypt and on the Somme. It was said of him ‘Along the shattered trenches he would go, seeking the wounded, encouraging the living, burying the dead … Constantly sniped at, always in danger from shell fire, in acute discomfort, he worked unceasingly to ease the lot of the wounded.’ As well as being twice mentioned in dispatches, he was awarded the Military Cross in 1917 for his work rescuing and aiding wounded soldiers on the Somme. After that, he was stationed at a hospital caring for men suffering from venereal disease. Like other army chaplains, his own theology developed over this time and he engaged with the then controversial concept of a suffering God. His most famous hymn, ‘God is love, let heaven adore him’ includes the lines:

‘And when human hearts are breaking,  Under sorrow’s iron rod,  That same sorrow, that same aching,  Wrings with pain the heart of God.’

Rees was warden of the College of the Resurrection, the Mirfield community’s theological training centre from 1922 to 1928. There he ensured the college was secure and built on a good foundation. Several of his hymns were included in the 1922 Mirfield Mission Hymn Book.

Unexpectedly, Rees was appointed bishop of Llandaff in 1931. It soon became apparent that Rees, an unassuming man of very simple tastes, was less a prelate and autocrat, than a pastor and evangelist. He was an outstanding bishop, a Catholic Evangelical with a profound spirituality, a social conscience and a pastoral heart.

The industrial depression had hit South Wales particularly hard and this was its most acute point. Unemployment figures ranged from 23% to 65%; Rees had to face the problems caused. He was definitely on the side of the working man and he worked hard to reduce the distress caused by extended periods of enforced idleness. In April 1932, he launched the Bishop of Llandaff’s appeal, asking readers of the Church Times to contribute. He regularly held open house at Llys Esgob (Bishop’s House) for groups of unemployed people, mixing freely with his guests and making sure a good meal was cooked for them. He formed a ‘band of young missioners’, a small group of unmarried clergy, who were sent to the poorest parishes to help with relief work. Rees was chairman of the Llandaff Industrial Committee, where he discussed ways of helping the situation with local politicians and industrial leaders. As first president of the South Wales and Monmouthshire Council of Social Service, he was prominent in promoting occupational clubs and other activities for the jobless and their families. Lady Rhys Williams said of him:

‘Bishop Rees was among the first to see the great moral wrong committed by the British people as a whole against the people of the depressed areas in the 1930s … The part played by him in remoulding the political thought of his time and risking the censure of the county well may have been more significant than we know.’

He was also a magnificent orator, both in English and Welsh.

Sadly, Rees’ health failed. He died after a long illness on 29 April 1939. Fittingly, his hymn ‘God is love’ was sung at his funeral. He was buried close to the cathedral; there is a brass memorial to him in the floor of the Lady Chapel. 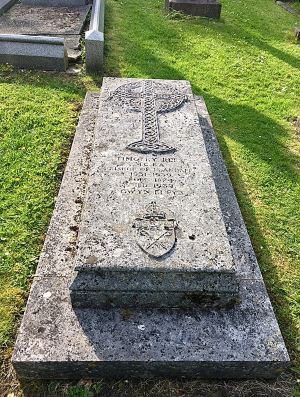 Parker, L.M. (2013). Shell-shocked prophets: the influence of former Anglican army chaplains on the Church of England and British society in the inter-war years. (Doctoral thesis, University of Birmingham, United Kingdom). Retrieved from https://etheses.bham.ac.uk/id/eprint/4495/