Daniel Parry-Jones (1891-1981) was a clergyman and author, best known for recording country tradition.

Parry-Jones came from a farm at Llangeler, Carmarthenshire, about eighteen miles south-west of Lampeter.  As the second son of the family, he was named after his maternal grandfather. He was one of ten children; he and his brothers and sisters grew up working on the farm. His father Thomas was a church warden in the Church of England; his mother Mary, a very religious woman, was a Nonconformist.

Daniel started school when he was five, walking almost three miles each way. For a Welsh-speaking child, it was not a good experience. He commented, ‘We were taught everything through the medium of a foreign tongue of which we knew nothing but the negative and the affirmative. … The dreadful result was that we were taught neither our own tongue nor the English tongue. Of our own, it was assumed it did not exist, of English, that it was well known and familiar.’ A few weeks later he started going to Sunday school, where he learned the alphabet and the basics of Welsh. In complete contrast, he loved the class and his lessons. He later wrote, ‘The Sunday schools were the means that above all else contributed to the preservation of the Welsh language.’

Parry-Jones left the day school when he was fourteen. However, he loved reading and his family realized that he would not make a good farmer. He moved on to the Grammar School at Pencader, therefore. It was only then that he was taught English as a subject. He recollected reading his first English book of any size about that time, Manco, the Peruvian Chief, by W.H.G. Kingston. He also carried with him a notebook in which he recorded unfamiliar words with their Welsh equivalent.

Parry-Jones entered St David’s College on his eighteenth birthday in 1909. His book Welsh Country Upbringing included an account of his time there. At this time, scouts looked after the needs of students, doing jobs like lighting fires, making beds and washing up after meals. The students ate breakfast, tea and supper in their own rooms.  Dinner at 6 pm was the only meal taken together in Hall. Parry-Jones often accompanied his meal with a glass of beer, to remind himself that he was now an adult! He enjoyed playing rugby, but faced with competition from those who had played it at school, could not get into the first fifteen. However, he took up tennis, learned dancing and began to smoke. He was shocked at the lack of Welsh influence, feeling it was ‘not a Welsh college at all … merely a college in Wales.’ Most of the academics were out of touch with Welsh life and culture. Lorimer Thomas, the Professor of Welsh, was the only Welsh-speaker among them. In contrast, the students included some Welsh men who had learned to speak English by reading the Bible.

As Parry-Jones graduated at the age of twenty-one, he had to wait two years before he could enter the church. He spent two years as a lay reader in his home parish before being ordained in St Mary’s Church, Abergavenny, in 1914. His first curacy was at St Catherine’s, Pontypridd, for an annual salary of £130. He was one of a team of vicar, three curates, a Church Army sister and two lay readers. His particular responsibility was oversight of the Welsh congregation. His visiting area included the business area of the town and many small and densely populated streets. He made weekly visits to the workhouse. He was to write of some of those he met there, ‘These were the lives which the Rhondda had broken and crushed, geared as it was from the first to the exploitation of its mineral wealth with little thought for the welfare of man.’ However, the Rhondda was still a prosperous place at this time. It was during the early days of the First World War; the demand for many commodities had increased and the coal mines were working flat out.

Parry-Jones’ next move meant he was, for the first time in his life, surrounded by English people. (Ironically it was also at this time that he met his wife!) He became curate at St Thomas’s, Stockport, an industrial town about ten miles south-east of Manchester. Parry-Jones was responsible for one of the two mission churches, catering for mill workers and their families. The business-people and the professional classes attended the parish church! It was still war time and Parry-Jones joined the Stockport company of the 9th Cheshire Volunteer Regiment. On Saturdays, he often went to Ashby-de-la-Zouch for open-air rifle training. Having been used to shooting at home on the farm, he won many prizes.

As Parry-Jones was married now, he needed a post with a house attached. In 1920 he returned to Wales, this time to Pontardulais, near Swansea. It was a large, straggling village; the main industries were coal, tin and iron. During his time there, two daughters were born to him and his wife. It became a struggle to live on a curate’s pay of £3 a week. Parry-Jones moved on to become curate-in-charge of Glais, in the hamlet of Llansainlet, for an annual stipend of £180.

Parry-Jones first post in sole charge was at Llanfihangel Rhydithon, a hill-country parish about ten miles north-east of Llandrindod Wells. He later learned that a major factor in his appointment was that his wife could play the organ! His salary almost doubled and his family moved to a fine vicarage with seven bedrooms and a wine cellar. During this period, a third child, a son, was added to his family.

Parry-Jones walked all over Radnor Forest, sometimes covering thirty miles in a day. He learned the local tales and legends, writing them up and publishing them in the Western Mail. He wrote of the churches and church life of Radnorshire, contributing articles to Y Llan. He also embarked on a much more personal style of authorship, largely for the sake of his children. They were growing up unable to speak Welsh and ignorant of the rural community in which their father had been born. Parry-Jones set out to write the story of his life. Writing fever gripped him. What he had intended as a simple story for children grew into a ‘comprehensive picture of the many sides and aspects of the old Welsh rural society as it functioned when I was a boy.’ This was eventually published as Welsh Country Upbringing (Batsford, 1948). It was successful. Writing in Transactions of the Honourable Society of Cymmrodorion, W.J. Williams commented, ‘This book, in its own naïve, sincere, and forthright way, is of consequence.’

Parry-Jones stayed in Radnorshire for nine years until 1936. However, most of his ministry as a parish priest took place in Llanelly, (a scattered parish just outside Abergavenny rather than the industrial town in Carmarthenshire). As well as the parish church, there were three mission churches and also a church room, where mid-week services were held. Parry-Jones loved to collect local legends and folk-lore, commenting ‘These tales were just behind us … they witness to what at different times occupied, and indeed influenced the minds of country people. They show too, how tenacious folk memory is.’ 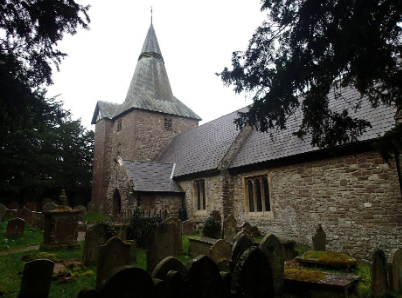 Parry-Jones was appointed Rural Dean of Crickhowell in 1957 and Honorary Canon of Brecon Cathedral in 1959. After twenty-five years in Llanelly, he and his wife eventually retired to Newport, where one of his daughters lived. He died in 1981.

As well as writing Welsh Country Upbringing and publishing numerous periodical articles, he was the author of five more books, Welsh Country Characters (1952), Welsh Legends and Fairy Lore (1953), Welsh Children’s Games and Pastimes (1964), My Own Folk (1972), and A Welsh Country Parson (1975). His writings set out to counter Caradoc Evans’ negative portrayal of Welsh life. They provide an invaluable record of bygone practices. His papers are held in the National Library of Wales.