David Walter Thomas was a Welsh clergyman instrumental in establishing the first Welsh Anglican church in the Welsh settlement of Patagonia.

Born on 26th October, 1829 the eldest son of Evan and Margaret from Cellan, Lampeter, Thomas was educated in Mumbles, Swansea and at St David's College, Lampeter.  He went on to Jesus College, Oxford in 1847, where he obtained a third-class Bachelor of Arts degree in Classics in 1851 followed by an M.A. three years later. In 1852 he was ordained a deacon by the Bishop of Oxford, Samuel Wilberforce, son of William Willberforce and a priest the following year by the Bishop of Bangor, Christopher Bethell.  His first church positions were as curate of Denio and Llanor near Pwllheli, Gwynedd (1853) and then as chaplain of Tremadog near Porthmadog (1854-1855). He was appointed perpetual curate of Penmachno before his appointment in 1860 as vicar of St. Ann’s, Mynydd Llandegai near Bangor, where he served for 34 years.

During this time, Thomas became an important figure in the promotion of the establishment of a Welsh language Anglican church in Patagonia, where a group of Welsh settlers had recently arrived.  Reverend Hugh Davies, a parishioner of Thomas’, was the first Anglican minister to arrive in Patagonia in 1883. With Thomas’ support, Davies was responsible for the construction of Eglwys Llanddewi (St David’s Church), Dolavon, which opened in 1891. 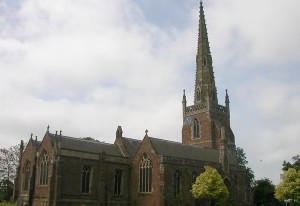 He married Anna Thomas in 1871, and they had two sons and three daughters.  Anna was also fiercely proud of her Welsh heritage and became active in attempts to reform the National Eisteddfod in the 1870s and 1880s.  Their son Evan also became a clergyman, and served as Professor of Welsh at St David's College, Lampeter from 1903 to 1915. Thomas spent a year as vicar of Braunston, Northamptonshire before moving to Holyhead, Anglesey in 1895 to serve as a vicar. He was also appointed a canon of Bangor.

A patriotic Welshman, Thomas published in both English and  Welsh, including a collection of sermons on the miracles of Jesus. He was a constant advocate of the Welsh church press, and served as editor on the monthly Welsh language periodical Amddiffynydd yr Eglwys.

Thomas died on December 27th, 1905 and is buried in St. Seiriol’s churchyard in Holyhead, Isle of Anglesey.