Davies’ father, also called Ellis Davies, was a gardener at Nannerch, Flintshire; the son was born on 22 September 1872. However, the family soon moved to Llaniestyn, on the Llŷn peninsula. Ellis was educated at Botwnnog Grammar School. He won an entrance exhibition to St David’s College, Lampeter in 1892; as a student there he also won prizes every year. He graduated in 1895 with a first-class degree. After ordination, he worked as curate in Llansilin near Oswestry, Old Colwyn and St Giles, Oxford. During his time at Oxford, he undertook further study; he gained a BA from Worcester College in 1907 and took his MA in 1911. He was also Welsh chaplain to Jesus College and Radcliffe Infirmary.

Davies soon went back to Wales. He was appointed vicar of Llanddoged, Denbighshire in 1909 and then rector of Whitford, Flintshire in 1913. He stayed at Whitford until his retirement in 1951. As a reward for his long service, he held a canonry at St Asaph from 1937 to 1946; he was made Canon Emeritus in 1946. He was chancellor of the diocese from 1944 to 1947.

His first love was music and he composed several hymns and chants. 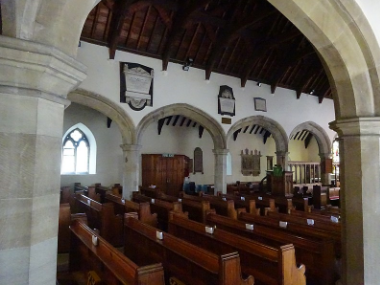 Picture: Inside the church of St Mary and St Beuno, Whitford, Flintshire

However, Davies was better known as an antiquarian. He became a member of the Cambrian Archaeological Society in 1913; it was said that from then until his death, he only missed two annual general meetings. Also in 1913, the National Eisteddfod at Abergavenny offered a prize for a handbook on British and Roman remains on any county in Wales. Davies won this for his work on Denbighshire. After further research, it was eventually published in 1929 as The prehistoric & Roman remains of Denbighshire. Again, at the national eisteddfod at Corwen in 1919, he won a prize for an essay on the place-names of Merionethshire. Then, in 1956, he was awarded the G.T. Clark Prize for research into Celtic history; the successful work was The prehistoric and Roman remains of Flintshire (1949). The two books on the antiquities of Denbighshire and Flintshire quickly became standard works. These counties had previously been neglected by archaeologists; Davies listed the archaeological finds and literary references with meticulous care.

Davies also wrote Llyfr y Proffwyd Hosea (1920) and Flintshire place-names (1959), as well as numerous articles in Yr Haul, Y Llan, Dictionary of Welsh biography and various historical journals. He was joint editor of Archaeologia Cambrensis from 1925 to 1940 and then sole editor until 1948. He was elected a fellow of the Society of Antiquaries in 1929; the University of Wales conferred on him an honorary D.Litt in 1959.  From 1940 onwards he was a member of the Court of Governors of the National Museum of Wales.

Davies married Mary Louisa, the daughter of Rev. David Davies of Llansilin; she died on 27 May 1937. Ellis Davies died in his ninetieth year on 3 April 1962 at Caerwys, Flintshire; he was survived by three sons and three daughters. His children donated his large personal collection of books to the Welsh Library at St David’s College.