Sam Morgan was born in the small village of Pinged in the parish of Penbre (Pembrey) in July 1907. He attended St. David’s College in Lampeter in 1927 and was ordained in St. David’s Cathedral after graduating in 1932. During his time at St David’s he was a member and Secretary of the Harriers Club, winning his colours in 1931. 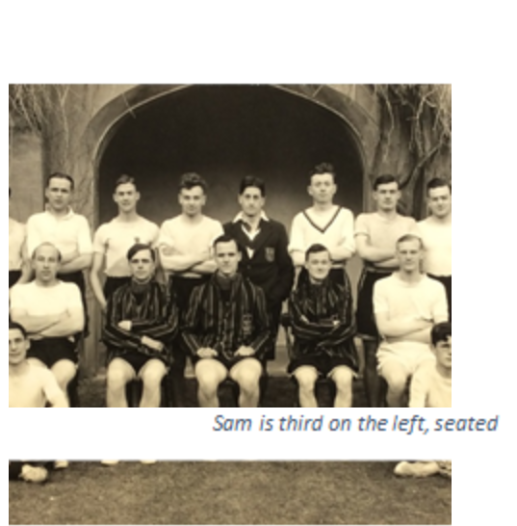 His first curacy was in Llandysul parish, a notable time as that is where he met and married his wife Babs in 1935. She faithfully supported his ministry and served alongside him for nearly 70 years.

The same year Sam and Babs were married, they sailed across the Atlantic Ocean to answer the call for Sam to serve as Chaplain for the Anglican church in Patagonia. He led churches in Llandewi and Trelew in the Chubut area in both English and Welsh. Their daughter Doreen was born there in 1936.

After spending seven years ministering through the depths of the Chubut Valley to as far away as the Rio Gallegos in South Patagonia and across the foothills of the Andes Mountains, it was time to return home to Cardiganshire. His nickname “Sam Patagonia” took root from this time and stuck with him throughout his life.

After a dangerous return trip across the Atlantic in 1942 during the height of WWII, Sam and his family settled back in Wales. He became the vicar of Llanwnen and Llanwenog, and son Gareth was born in 1943.  From 1964-1978, he served as vicar for Felinfoel parish in Llanelli.

Even after retirement, Sam remained active in church and community service even right up until just a few weeks before his death in 2005, leading and preaching at services, serving diligently as Chaplain to the Burma Star (a body of former soldiers of both World Wars from the vicinity of Llanelli) and as President of his bowling club. He was also the oldest member of the Lampeter Society and unfailingly attended the reunions, taking the Welsh language services on Saturday mornings. His obituary in the societies’ magazine recalls that he ‘drove his car until he was well into his 90s. He also continued to smoke, quite liked a drink, and had a robust sense of fun’.

“Sam Patagonia” continued to earn his moniker posthumously; when an important historical document was discovered by his son Gareth in an English attic in 2015. The typed account about the murders of three young Welshmen by Tehuelche Indians in 1884 was authored by the only survivor, John Daniel Evans.

As the Welsh settlement in Patagonia is celebrated for being one of the first South American settlements where settlers had learned to live with the local people, rather than destroy them to steal their lands, this tragic event had long caused puzzlement. The account provided many insights, and it was discovered that it was Canon Sam Morgan himself who had carried this document back from Patagonia in 1942.